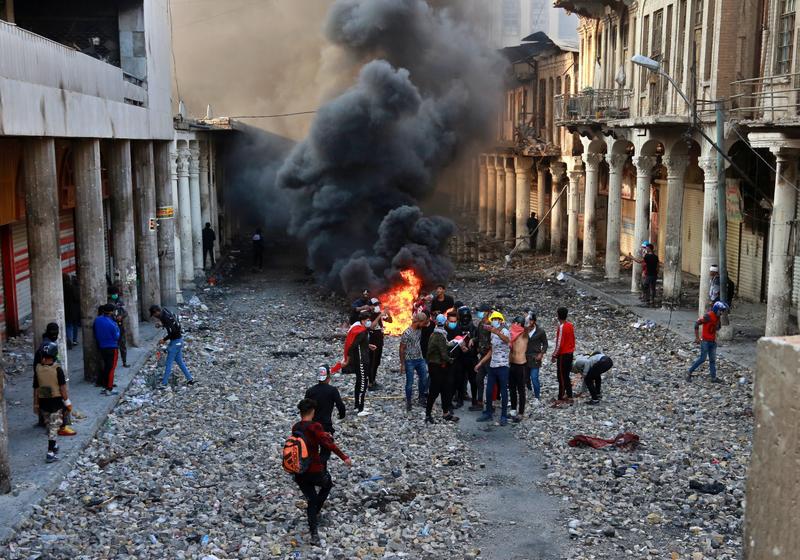 BAGHDAD — With wisps of smoke still rising from the remnants of another night of violence, the workers came in the morning to salvage what merchandise they could from the torched warehouses in Baghdad's central commercial district.

Foreign investors have pulled out of deals in Iran's energy and other sectors, alarmed by the extent of Iranian influence, highlighted by the heavy-handed security crackdown on demonstrations

Boxes upon boxes of clothes, cosmetics and household goods stored by traders in the country's most thriving market were hurled onto pick-up trucks to be taken away from Rasheed Street, a historic avenue that for weeks has been scene of ongoing violence between anti-government protesters and security forces.

Stores were shuttered across the once bustling thoroughfare, where the chatter of bargain-hunters has been replaced by an occasional volley of bullets.

“We are loading and leaving,” said one merchant, Salah Redha. “My merchandise is worth over US$1.5 million. Half of it is gone and the other half destroyed ... who will compensate me?”

With Iraq's leaderless uprising now in its third month, the protracted street hostilities, internet outages, blocked roads and a general atmosphere of unease are posing risks to Iraq's economy. In particular, the unrest has set back the most fragile segment of the country's economy, the private sector, where business owners have faced losses from damage to merchandise and disruptions of markets and from consumers reeling in their spending out of fear for the future.

So far, the unrest has not significantly affected Iraq's main economic lifeline, oil, which brings in US$6-7 billion a month, up to 90% of the state's revenue. Oil exports have not faced disruptions, according to two senior oil ministry officials. Production has not been hurt by regular sit-ins blocking roads to major oil fields in the south, home to the vast majority of Iraq's oil resources.

But future investment is now in question, said Zaab Sethna, co-founder of Northern Gulf Partners, a frontier investment firm with experience in Iraq. Foreign investors have pulled out of deals in energy and other sectors, alarmed by the extent of Iranian influence in Iraq, highlighted by the heavy-handed security crackdown on demonstrations.

“We had an American backer ready to commit, to put money into Iraq, and they turned around and said, ‘Look everything I am reading says this is a place the Iranians are taking over and I am not going to put my money there,’” he said. 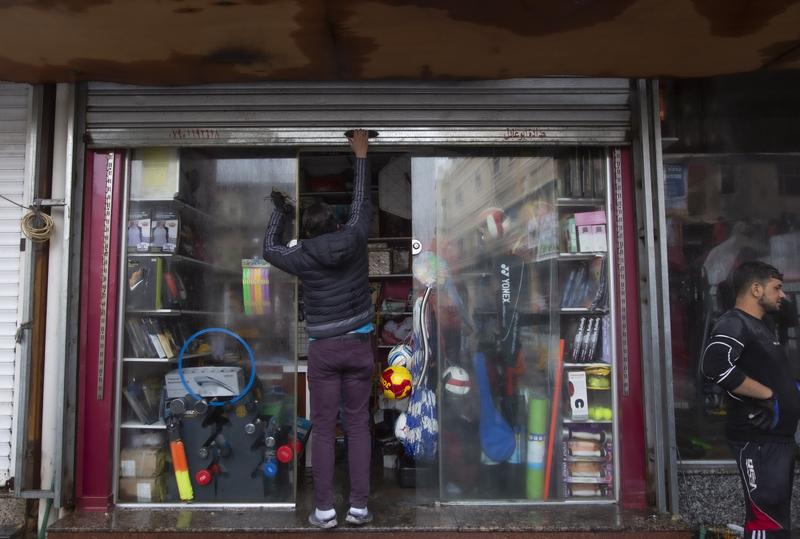 In this Dec 16, 2019 photo, a man opens his sports supplies store to inspect the damage caused by fire, smoke and leaking water after the whole building caught fire during clashes between protesters and riot police, at the commercial and historic al-Rasheed street, in the center of Baghdad, Iraq. (NASSER NASSER / AP)

Other investors have been worried by the slowness of talks on forming a new government after Prime Minister Adel Abdul-Mahdi resigned in the face of the protests. Political blocs are expected to name a new consensus-based candidate for the premiership this week.

Reform measures taken to retire key director-generals over the age of 60 has also caused anxieties for companies who have vested business relationships with bureaucrats. Ironically, the very issues raised by protesters on the street, including corruption, bureaucracy and lack of adequate public services, have long been a factor deterring investment, Sethna said.

Two industry officials who were in the middle of negotiating lucrative energy contracts said they have taken a step back — “until the dust settles,” one said. Both spoke on condition of anonymity to not derail future talks with the government.

Periodic road closures by protesters leading to Iraq's two main commodities ports in Umm Qasr and Khor al-Zubair have halted trade activity several times. To compensate, higher volumes of goods were imported through the border cross with Turkey in the north in late November. Hussein Ali, a potato trader, said delays at Umm Qasr cost him up to US$6,000 per container, so he opted for the northern land route. Customs from the ports are an important source of state revenue.

There are no figures to know exact economic losses suffered due to protests, because disruptions, when they occur, are often temporary or reliable data is hard to come by.

A military spokesperson for the prime minister, Maj Gen Abdul Karim Khalaf, said the protests had cost Iraq US$6 billion within the span of a month. This figure is unlikely, since it would require major setbacks in oil earnings, according to calculations by the Associated Press.

The impact has been indelible on Iraq's hobbled private sector.

The World Bank has said developing this sector was key to diversifying the oil-dependent economy and creating much needed jobs. With poor regulations and high start-up costs, however, Iraqis have had little incentive to take the risks associated with entrepreneurship.

As a result, much of the sector remains informal and limited largely to cash-based retailers — who are highly sensitive to any disruptions. 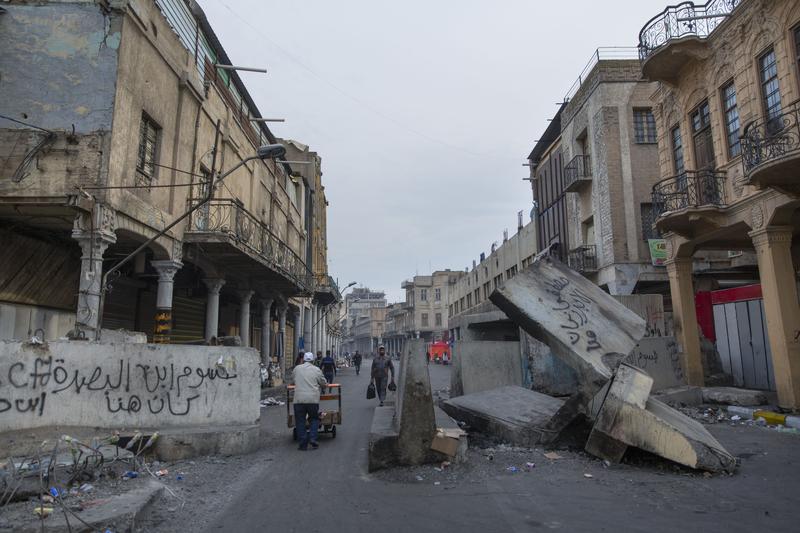 In this Dec 16, 2019 photo, with the major part of the shops are closed, cement blocks close the commercial and historic al-Rasheed street, in the center of Baghdad, Iraq. (NASSER NASSER / AP)

“We have a huge informal sector that has no chance of joining the formal sector — they have no deeds, ownership, just conventions and understandings. If something goes wrong, you are dropped,” said Ahmed Tabaqchali, chief investment officer of AFC Iraq Fund.

At Shorja market, Baghdad's main wholesale market, merchants said they have seen daily earnings drop since protests started in October in part because customers are buying less and in part because of the turmoil at Rasheed Street, where most store their merchandise.

In southern Iraq, a rising number of medium to small businesses owners are defaulting on monthly payments on bank loans, said an official in Iraq's League of Private Banks, who requested anonymity because he was not authorized to speak to media.

Iraq's growing e-commerce sector was decimated by widespread internet cuts imposed by authorities in October and November in a failed attemp to quell the protests, said Mujahid Waisi, an entrepreneur and founder of KAPITA, an incubator space set to launch early next year.

READ MORE: 13 dead in 1 of the ‘worst’ days of protest in southern Iraq

Even with the internet restored, “because most of those items are not essential, people fear making purchases because of the situation,” said Waisi. “They want to keep money in their hands.” Moreover, e-commerce startups are hesitant to promote their services online, fearing protesters will criticize them as unpatriotic, he added.

Many cash-strapped merchants have let go of workers because of the escalating crisis.

“It has been 25 days that I haven't worked,” said Mohammed Hamid, a worker in Rasheed Street. He said the shopowner he worked for told him not even to come in — "how am I going to pay your ... weekly salary when I am closed?”