ROK to seek talks with DPRK to facilitate US-DPRK dialogue 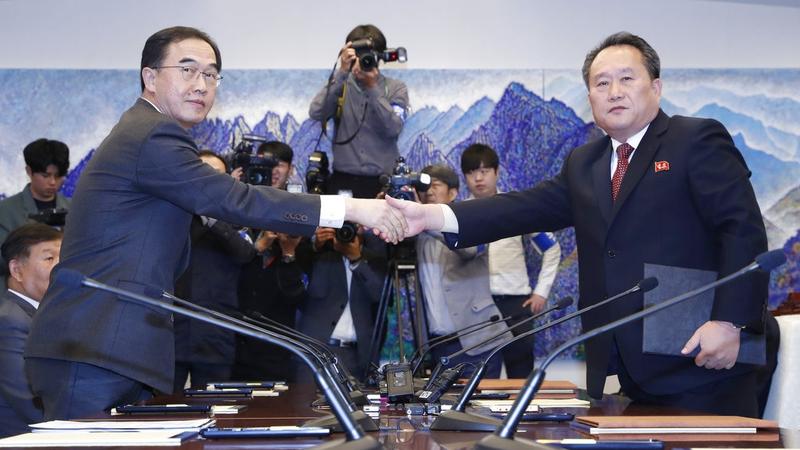 In this Oct 15, 2018 file photo, then ROK Unification Minister Cho Myoung-gyon, left, shakes hands with his DPRK counterpart Ri Son-gwon after exchanging the joint statement during their meeting at the southern side of Panmunjom in the Demilitarized Zone. ROK's Unification Ministry said on March 12, 2019, that it will push for inter-Korean talks, through which Seoul can help facilitate the dialogue between Pyongyang and Washington.(KOREA POOL / YONHAP VIA AP)

SEOUL — The Republic of Korea (ROK)'s Unification Ministry in charge of inter-Korean relations said Tuesday that it will seek talks with the Democratic People's Republic of Korea (DPRK) to facilitate a dialogue between the DPRK and the United States.

The ministry said in its 2019 work plan, submitted to the presidential Blue House, that it will push for inter-Korean talks, through which Seoul can help facilitate the dialogue between Pyongyang and Washington.

It noted that ROK will intensify the virtuous cycle of improved inter-Korean relations leading to progress in the Korean Peninsula's denuclearization.

The work plan came as the second DPRK-US summit in the Vietnamese capital of Hanoi ended without any deal.

Following the Hanoi summit, ROK President Moon Jae-in said continued talks between the DPRK and the United States would be the most important, indicating his willingness to find a compromise between Pyongyang and Washington.

Unification Minister Kim Yeon-chul said he will prepare for consultations with the United States to resume the two major inter-Korean cooperation projects — the jointly run industrial zone in the DPRK's border town of Kaesong, as well as tours by ROK people to DPRK's Mount Kumgang resort that have been suspended since 2016 and 2008 each.

The ministry said in the work plan that ROK will address key issues, including improved inter-Korean relations and the peninsula's denuclearization, through close communication between the leaders of the two Koreas.

It will also seek various inter-Korean talks, including higher-level and working-level dialogues and talks in the inter-Korean liaison office, which opened in September last year in Kaesong for the round-the-clock communication.

To build a joint community of the two Koreas, ROK planned to push for various cooperation projects, such as the connection of railways and roads across the border, the joint use of the Han River estuary, the linking of air routes, forestry cooperation and the peaceful use of the demilitarized zone (DMZ).

ROK and the DPRK held a groundbreaking ceremony in December last year to connect railways and roads along the eastern and western Korean Peninsula, but construction works are yet to be launched due to international sanctions against Pyongyang.

To brace for the resumption of the Kaesong Industrial Complex and the Mount Kumgang tour, ROK planned to make preparations within the framework of sanctions against the DPRK.

ROK will continue to promote social, cultural and sports exchanges with the DPRK this year, including a joint bid to host the 2032 Summer Olympics.

As part of efforts to resolve humanitarian issues, ROK will pursue more reunions of Korean families, separated by the 1950-53 Korean War, by restoring the reunion center in Mount Kumgang, holding regular and video reunions, and exchanging video messages.

The Korean families have been banned from contacting and meeting each other since the Korean War ended with armistice.

To win international support for peace and prosperity on the peninsula, ROK will step up public diplomacy for peace, the unification ministry said. 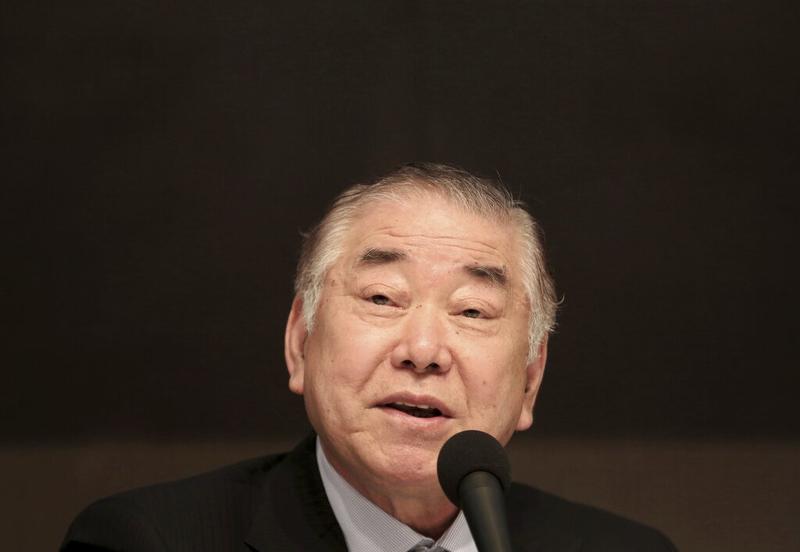 Moon Chung-in, a special adviser to the Republic of Korea (ROK)'s President Moon Jae-in, speaks during a forum hosted by the Kwanhun Club in Seoul, ROK, March 12, 2019. (AHN YOUNG-JOON / AP)

DPRK launch would be 'catastrophic' for diplomacy

A ROK presidential adviser on Tuesday said the DPRK must not use a possible rocket launch as leverage in negotiations with the US, as such a move could be "catastrophic" for global diplomacy on its nuclear program.

Moon Chung-in, a retired university professor who is now a special adviser to President Moon Jae-in, told a panel discussion that the DPRK using a rocket launch or other nuclear activities as leverage in negotiations would be a "bad move."

Moon Chung-in said such a move by the DPRK could eventually cause a "catastrophic" consequence or a "big disaster" in the US-DPRK diplomacy.

US-based websites recently released satellite photographs indicating the DPRK has restored structures at its long-range rocket launch facility that it dismantled last year at the start of diplomacy with the United States. Other satellite imageries show increased vehicle activities at a separate DPRK facility used to manufacture missiles, and rockets for satellite launches.

Some experts say these suggest the DPRK may be assembling a long-range rocket to carry out a banned satellite launch in the wake of the Hanoi summit.

Moon Chung-in said both the DPRK and the US must restrain themselves to keep diplomacy alive and start unofficial contacts to resume talks.

US envoy to the DPRK Stephen Biegun on Monday had said that "diplomacy is still very much alive" despite the failed summit.

Moon also said the US should seek the gradual denuclearization of the DPRK because an "all-or-nothing" strategy will not help break the impasse in talks. He said the Hanoi summit showed how "difficult" and "painful" it would be to achieve denuclearization on the Korean Peninsula.

To bridge the gap, President Moon could pursue an unofficial inter-Korean summit as he did last year before the first summit between Trump and Kim, and then visit Washington, the adviser said.