Health is wealth, goes the adage. And perhaps it was never more relevant than for China’s burgeoning middle class, who are turning increasingly health-conscious with their growing affluence.

Chinese residents’ per capita disposable income rose to 21,035 yuan (US$3,065) in the January-August period from 19,342 yuan a year earlier, according to data from the National Bureau of Statistics.

“It is natural that when people get rich, they will want to keep in good health to enjoy their life and pursue a better living quality,” said Terence Chau, CEO and program director of the Asian Academy for Sports & Fitness Professionals (AASFP).

And China is living proof. Between 2012 and 2017, the number of Chinese people who exercise regularly increased steadily and reached 550 million, accounting for over 40 percent of the total population, according to a report by market research firm AskCI Consulting, headquartered in Shenzhen, in South China’s Guangdong province.

But the growth potential for the fitness industry remains huge. While China now has 37,627 gyms, surpassing the US, the penetration rate of the fitness population is only 0.79 percent, far below the US’ 17.8 percent, according to a white paper by fitness industry SaaS (software as a service) provider Qingcheng Fit, based in Beijing.

The value of China’s fitness industry was about 150 billion yuan in 2017, with a compound annual growth rate of 7.7 percent over the six years from 2012, according to AskCI.

The industry is also riding the technology wave, making exercising and keeping fit both hip and accessible for the middle class.

Among the biggest beneficiaries have been the tech startups making “leaps and bounds” in recent years to keep pace with demand for fitness services, said Rex Wong, program director (Asia) of the International Personal Trainers & Fitness Academy (IPTFA).

Wong said the market started to “explode” in 2017 as investment from venture capital firms poured into fitness tech companies in Asia, including China. With the emergence of online video platforms, smart gyms and artificial intelligence (AI)-enhanced fitness equipment, fitness activities are no longer limited to large health clubs.

Keep, China’s top mobile exercise app, now has over 150 million users of its free workout videos, up from 10 million in November 2015. In July, online technology media platform 36Kr named Keep as the highest valued internet fitness company in China after it raised US$127 million in its Series D round of financing.

In China, as of June, the number of monthly active users of big data fitness apps had reached 71 million, according to data from consulting firm iResearch. Big data fitness refers to the use of data collected from multiple users to provide training instruction and feedback on body condition.

Mini gyms, such as those run by fitness startups including LePao, Misspao and Supermonkey, have sprung up in office buildings, residential areas and shopping malls. Self-serviced “gym pods” measuring as small as 5 square meters give users 24-hour access via their smartphones.

With gyms in over 100 cities across the country, Chinese smart gym chain operator Comma Fit allows users to access its 24-hour gyms using a smart wristband. In a typical area of 600 to 800 sq m, only minimal staffing is needed.

A traditional gym would open from 9 am to 9 pm, but for many people, especially in first- and second-tier cities, these are working hours, said Xu Zhiyan, Comma Fit’s CEO. “Operating for 24 hours does not mean we encourage people to exercise at midnight, but to allow them to fully utilize their fragmentary time before or after work.” 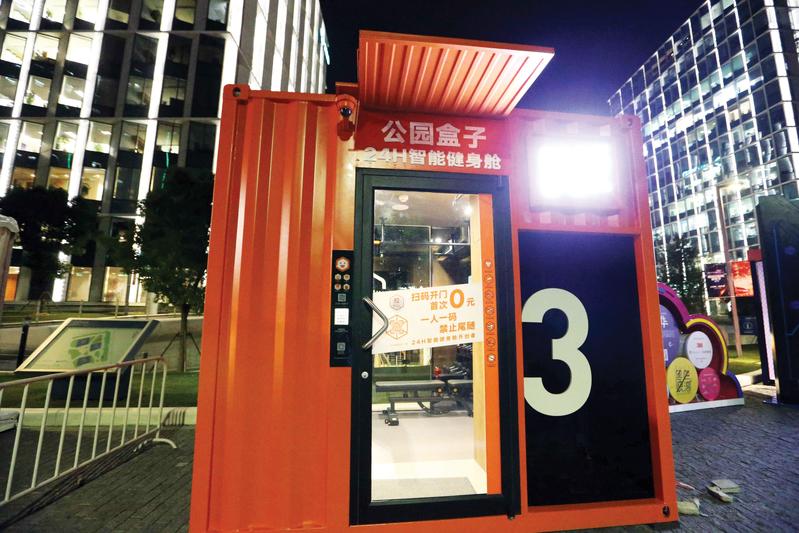 Xu aims to open 300 franchised gyms by the end of 2019. He said the company’s ultimate goal is to make health clubs as common as convenience stores. Comma Fit is also considering opening its first overseas branch in Melbourne, Australia.

“The adoption of technology in the fitness industry started in North America and Europe, with the emergence of a number of (fitness) startups back in 2014 and 2015. Today, many of them, as well as their apps, are quite mature in the market,” said IPTFA’s Wong, noting the huge potential of Asian fitness tech firms as many of them are still at an early stage compared with their Western counterparts.

In fact, Chinese fitness tech companies, together with those from India, Canada and the United Kingdom, accounted for one-fifth of international equity deals in the sector in the first 10 months of 2017, according to global consulting firm CB Insights.

Besides a burgeoning middle class and the proliferation of smartphones, pro-fitness government policies are also driving the industry’s growth.

In 2016, the State Council, China’s Cabinet, set a goal to increase the output of the fitness and leisure industry to more than 3 trillion yuan by 2025. A five-year plan to improve fitness and health levels nationwide was issued that same year.

Spurring the sector’s growth, meanwhile, are fitness apps featuring training tasks and scoring systems, and wearable devices that make it easier for people to monitor their workouts and personal fitness — for example, real-time heart rate.

Wong said that since not everyone can afford a personal trainer to help with customized training and dietary plans, smartphone fitness apps are a handy alternative.

“By learning some of the most basic and easy-to-learn exercises through online videos, people can already see some results (in their body shape),” Wong said, adding that even a novice can explore equipment and training with the help of fitness tech.

At Comma Fit, users can try a wide range of smart facilities — from body measurement devices, and treadmills with 32-inch touchscreens, to live-streamed courses — while fresh juice and healthy meal sets are also provided, according to Xu.

“We have a smart device called Smart Spot in the strength and power zone,” said Xu. He explained that when the user starts a strength training session in front of the smart screen, the system analyzes the accuracy of each movement and gives feedback on how posture should be modified.

For gyms to adopt digital technology is not as expensive as people might expect, said Xu. Though smart devices may cost more than traditional gym equipment, the hardware is a one-time investment and totally worth the price, he said.

“All of our smart devices are equipped with built-in apps, so keeping the software updated is important,” said Xu. “If I want to add a new marathon mode on the treadmills, I can launch the upgrade kit with one click and the treadmills across all branches will be updated.”

“Young people in Asia are tech savvy. They are willing to try new tech products and are afraid of being left behind the trend,” said Chau from AASFP, adding that the favorable environment gives fitness tech companies a broad platform to test their products and solutions.

Opportunities in the market are also attracting fitness startups from outside the region. For example, New York-based ClassPass has moved into Asia, rolling out services in Singapore and Hong Kong in recent months.

ClassPass is a provider of monthly subscription service to a network of boutique fitness studios and gyms in over 50 cities worldwide. Its entry to Asia adds intensity to the already fierce competition in a segment that includes players like Singapore-based GuavaPass and Kuala Lumpur-headquartered KFit.

“We are also working to help equip personal trainers with updated technology skills. Around 20 to 30 percent of our courses now cover knowledge of fitness tech,” he said.

Indeed, fitness apps are unlikely to ever fully replace personal trainers. “As a matter of fact, some people would turn to personal trainers for more professional and systematic training experience after they exercise with online videos for a while,” said Chau.