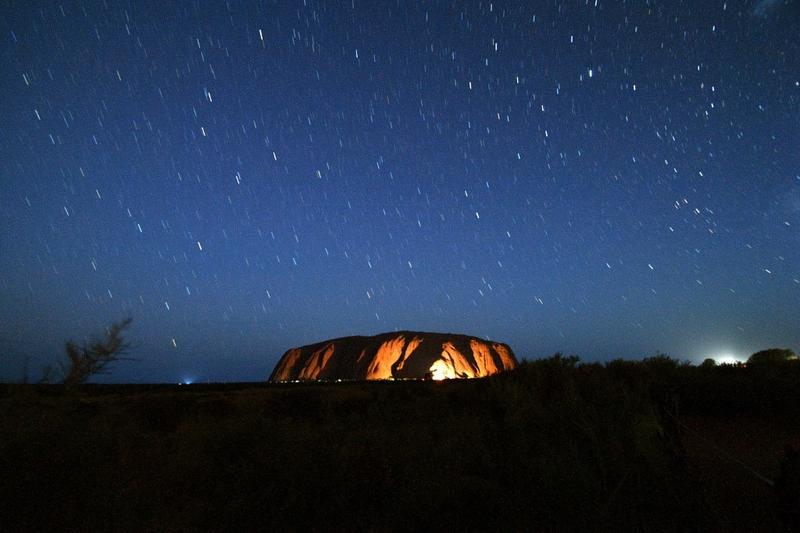 Stars trails are seen over Uluru, also known as Ayers rock, after a permanent ban on climbing the monolith at the Uluru-Kata Tjuta National Park in Australia's Northern Territory on Oct 26, 2019. Australia's Uluru was permanently closed to climbers Oct 25 evening to meet the wishes of Aboriginal people who hold the red monolith sacred, but hundreds of tourists scaled it in the final hours before the ban. (SAEED KHAN / AFP)

The recent closure of Uluru in central Australia to tourists has prompted calls for similar bans on sites considered sacred by indigenous people across the country.

Indigenous activists have called for popular walking sites such as Mount Warning in northern New South Wales, Mount Beerwah in the iconic Glass House Mountains on Queensland's Sunshine Coast and St Mary Peak in the Flinders Ranges in South Australia to be closed to tourists.

The climbing ban on Uluru, also known as Ayers Rock, took effect on Oct 26. In its wake there have been renewed calls by the local Aboriginal people to close access to Mount Warning.

Mount Warning in the Tweed Range, also known to the local Aboriginal community as Wollumbin, attracts an estimated 100,000 visitors annually. But to the traditional owners, the Bundjalung people, it has been a sacred site for thousands of years.

A spokesperson for the Tweed Shire Council said: "There have been a number of calls over the years to close Mount Warning to walkers, but nothing has ever come from it.

"I expect now we will probably see a greater effort on the back of the Uluru closure to follow suit.

"To the local Aboriginal community, these sites go to the very heart of their existence and belonging as a people," the spokesperson said.

"What we try to do is work with the local Aboriginal leaders (to come up with something) that works for everyone."

In South Australia, visitors to the Flinders Ranges, 200 kilometers north of Adelaide, are being asked by the traditional owners not to climb St Mary Peak.

St Mary Peak is central to the Adnyamathanha creation story, which involves two serpents entwined to form a huge natural amphitheater in the foothills of the ranges where rock art can be traced back 5,000 years.

"All we want to do is to stop people walking up the peak. You get the same views of the area from other places," Adnyamathanha Traditional Landowners Association chairman Michael Anderson told China Daily.

"We would rather educate people about the importance of the site, rather than ban them altogether."

From midnight on Oct 25, the climbing track on Uluru was officially closed – something traditional owners had been pushing for.

The Anangu people celebrated the closure at the base of the rock to signify to new visitors that it was no longer available – or lawful. But it proved a contentious issue and gained global headlines.

A new sign was erected at the base of the rock to inform visitors of the new policy. It read "This is our home," and "Please don't climb".

Professor Jakelin Troy, director of Aboriginal and Torres Strait Islander Research at the University of Sydney, said walking on Uluru was "disrespectful" to the "country" of the Anangu people.

"In disrespecting country we disrespect its people," Troy, who is an Aboriginal, said.

"This is exactly the same reason why people are not allowed to walk on places that are sacred and highly respected in all cultures.

Freya Higgins-Desbiolles, a senior lecturer in tourism management at the University of South Australia, said: "As a non-indigenous person, it is incredibly important for us to understand just how important sites like Uluru are to the Anangu people.

"Aboriginal people in this country today have a voice and they are using that voice to have their sacred sites respected."

In March this year, the Victorian state government announced a climbing ban in much of the Grampians National Park, west of Melbourne.

Covering more than 165,000 hectares, the park is home to around 90 percent of southeastern Australia's Aboriginal rock art. But over the years it has also become a popular rock-climbing area, not only for local but also international climbers.

The government took the decision following complaints from Aboriginal elders that climbers were causing environmental and cultural damage.

They said many climbers ignored marked tracks; cut their own paths to climbing sites; defaced rock walls with climbing bolts; covered rock paintings with climbing chalk; and even defecated in sacred areas.

"It is a very delicate balancing act," a spokesperson for Parks Victoria told China Daily.

"It's not just cultural sites that need protecting, but plant and animal life as well. At the same time, the Grampians have become popular for climbing – some of the best in the world."

To ensure the environmental and cultural integrity of the park was protected, the government and traditional owners joined forces to draw up a management plan for the Grampians National Park and adjacent parks and reserves.

"Each year we have some 80,000 climbers visiting the area," the spokesperson said.

"Less than 40 percent of the park is closed to climbing, so climbers still have a lot of areas to climb."