Democrat Nancy Pelosi returns as House speaker in divided US 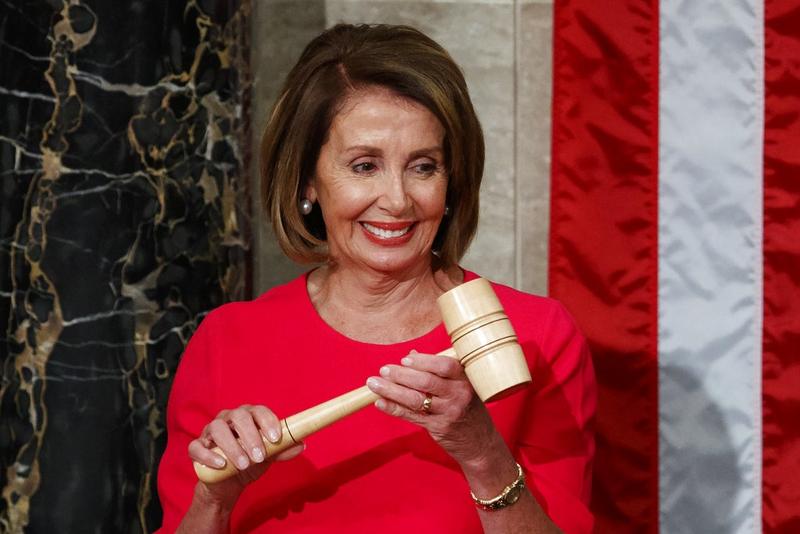 WASHINGTON — Representative Nancy Pelosi, a California Democrat, was elected the new speaker of the US House of Representatives Thursday, the first day of a new, divided Congress.

Pelosi, 78, is the only woman who has held the office before and is among a few elected officials to return to the post. She was the House speaker from 2007 to 2011 when her Democratic Party controlled the lower chamber.

Pelosi, 78, is the only woman who has held the office before and is among a few elected officials to return to the post

For her second speakership, Pelosi defeated Republican nominee Kevin McCarthy in a roll-call vote Thursday, winning 220 votes out of a total of 430 present, according to CNN.

In her floor speech upon accepting the speaker's gavel, Pelosi said that the House floor must be "America's Town Hall" where people's voices will be heard and affect lawmakers' decisions as she was trying to set a bipartisan tone for the new Congress.

She previewed her party's long-term priorities, including tackling climate change, lowering health care costs, investing in "green" infrastructure and "restoring integrity" to government, while hinting at measures to end a partial government dragging into the 13th day on Thursday.

About a quarter of the federal government shut down last month as a result of an impasse between the White House and the Congress over whether to provide billions of US dollars for President Donald Trump's long-promised border wall.

Pelosi said in a clip airing on MSNBC on Wednesday that she's willing to give "nothing for the wall," while Senate Majority Leader Mitch McConnell has said the upper chamber won't consider any bills without the president's support.

Christopher Galdieri, assistant professor at Saint Anselm College, told Xinhua that he expects "the shutdown fight to continue take up most of the oxygen" in Washington.

The convening of the new Congress also comes at a time when Pelosi and her party are poised to confront the White House and the Republican agenda with their House majority, as Democratic lawmakers have vowed to conduct more oversight onto the Trump administration.

An effective legislator and political strategist, Pelosi played a key role in last year's midterm elections that saw Democrats seize control of the House for the first time in eight years by helping raise millions of dollars for Democratic candidates and keep them focus on the issue of health care on their campaign trails.

The new Congress Pelosi's now presiding over seats a record number of female lawmakers and is the most racially and ethnically diverse, including a new generation of Muslims, Latinos, Native Americans and African-Americans. The new speaker said she welcomes the "transformative freshman class."

In overall, Democrats have a 235-199 majority in the House, with one seat still in dispute after allegations of election fraud in the state of North Carolina. In the Senate, 53 Republicans hold the majority over 45 Democrats and two independents aligning with Democrats.