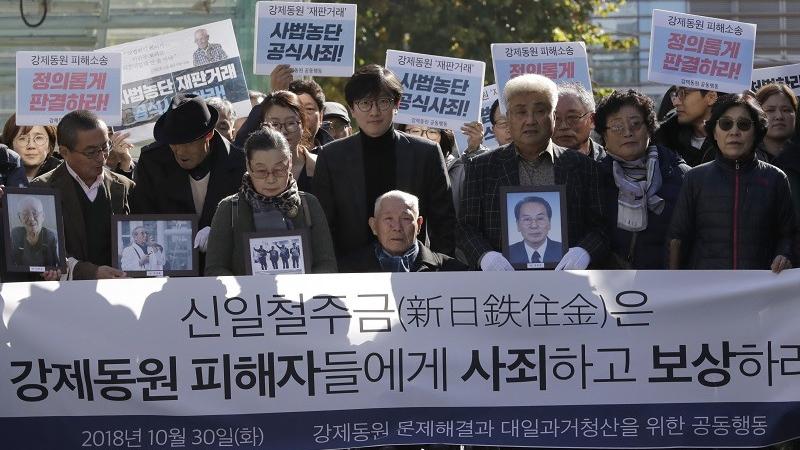 South Korean Lee Chun-sik, center, a 94-year-old victim of forced labor during Japan's colonial rule of the Korean Peninsula before the end of World War II, sits on a wheelchair upon his arrival outside the Supreme Court in Seoul, South Korea, Oct 30, 2018. A South Korean newspaper reported on Jan 2, 2019 that South Korean plaintiffs in a World War Two forced labor court case against Japan's Nippon Steel & Sumitomo Metal Corp have applied to seize some of Nippon Steel's Korean assets. (LEE JIN-MAN / AP)

The application for the asset seizure, if approved by the court, could further strain South Korea's already frosty bilateral relations with Japan over the issue.

Japan denounced a South Korean Supreme Court ruling in October that Nippon Steel should pay 100 million won (US$90,500) to each of four South Koreans to compensate them for forced labor during the war.

The Japanese government said all wartime reparations were dealt with in a 1965 treaty that had normalized ties between the two neighbors.

The South Korean plaintiffs applied to a district court on Dec 31 for the seizure of Nippon Steel's shares in a Korea-based joint venture with steelmaker POSCO.

"We express strong regret for Nippon Steel's careless and inhumane attitude, which has not shown any willingness to carry out the ruling for the plaintiffs, who have fought to remedy the violation of their rights for some 70 years," the lawyers said in a statement.

The lawyers did not say how much the plaintiffs sought from the seizure.

A spokeswoman for Daegu District Court confirmed that the application for asset seizure had been submitted.

Wednesday is a holiday for most businesses in Japan.

Nippon Steel called it "extremely regrettable" at the time of the ruling but said it would review the decision carefully while considering further steps.