By Zhang Li, Shi Ruipeng and Wen Zongduo in Nanning 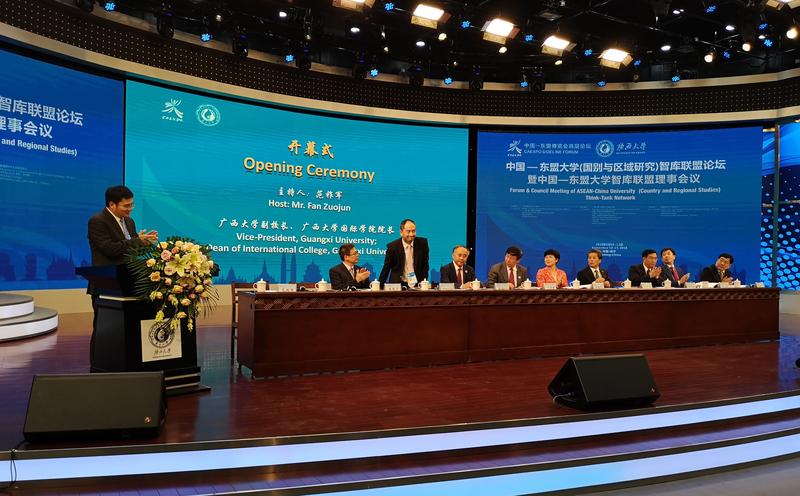 In this photo, a speaker gives a speech at the China-ASEAN University (Country and Regional Studies) Think Tank Alliance Forum held at Guangxi University, in Nanning, South China, from Sept 11 to 12, 2018. (WEN ZONGDUO / CHINA DAILY)

NANNING - People-to-people exchanges are to speed up their flow among China and ASEAN members as officials, professionals and industrialists encourage deepening of cooperation, according to forum participants in south China's Nanning city.

Enhancing cultural exchanges and cooperation is one of sixth proposals made by Chinese Vice-Premier Han Zheng at the opening ceremony of the China-ASEAN Expo on Sept 12. He listed people-to-people exchanges as one of three pillars to support efforts for a closer community with a shared future, together with political security, economy and trade.

“China is willing to deepen practical cooperation with ASEAN members in culture, education, health, tourism, youth, media, sports and other fields based on mutual respect of cultural diversity and social values,” Xinhua quoted Han as saying. And it will join the nations in fostering a “spirit of China-ASEAN cooperation characterized by mutual trust, mutual accommodation, mutual benefit, and mutual assistance”.

As a major part of cultural exchanges, high-end think tanks are playing an increasingly important role in the development of all members and meeting with common needs of both China and ASEAN

Experts at the China-ASEAN University (Country and Regional Studies) Think Tank Alliance Forum, which was held at Guangxi University, explored ways to promote exchanges between the peoples on Sept 11 and 12.

Chen Dehai, Secretary-General of ASEAN-China Centre, noted progress in building regional platforms on education, scientific research. He told the forum that ACC, as a bridge between China and ASEAN, will expand such networks for better exchanges of educational institutions.

As a major part of cultural exchanges, high-end think tanks are playing an increasingly important role in the development of all members and meeting with common needs of both China and ASEAN, he said.

Apart from providing services to support smart technological projects and trade, the center will be active in training more youths to become friendship messengers among the local folks, he said.

Du Kewei, a senior official with the Ministry of Education, showed his appreciation for cultivating more friendship messengers. About 1,000 researchers are working in dedicated centers for China-ASEAN cooperation in about 200 universities across the region.

People-to-people exchanges are linking people’s heart, he said. “With deep traditional links and common aspirations for shared future, such exchanges will fructify in the well-being of the peoples,” he said.

Choltis Dhirathiti, executive director of ASEAN University Network, said they are building a sub-alliance of intellectual property rights apart from exploiting digital technologies besides other activities in helping faculties and students cope with the new era. “We hope to strengthen our regional cooperation and coordination,” he told the forum. 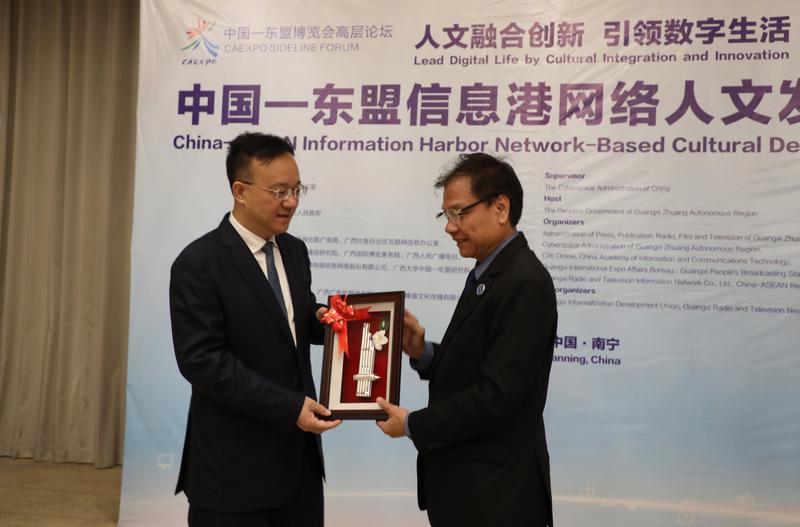 Cyber culture drew attention in Nanning at varied forums between Sept 11 and Sept 19. Fan Weiping, deputy director of the State Administration of Radio and Television, earlier said that the region will embrace better development opportunities and broader space for cooperation.

At the China-ASEAN Information Harbor Network-Based Cultural Development Forum in Nanning on Sept 13, Fan put forward three proposals: to jointly promote the prosperity and development of cyber culture, to promote the construction of international governance system of cyber audiovisual, and to conduct cooperation in internet information technology and industry.

As close neighbors and well-linked partners, China and ASEAN has the unique advantage to carry out the exchange and cooperation of cyber culture, said some speakers who also analyzed development trends and explored paths for further cooperation

Savankhone Razmountry, vice-minister of Press, Culture and Tourism Ministry of Laos, said today’s young people, who have unfettered access to information through smartphones, have become the majority of users in this technological innovation era. “In the next few years, one of Laos' core strategic goals will be to popularize its culture, tourism and media communication through Internet,” he said at the forum.

The forum, where 15 Chinese and foreign guests delivered speeches, explored the paths and methods of exchanges and cooperation of China-ASEAN cyber culture around key areas, such as internet animation, internet games, internet audio-visual and internet literature.

As close neighbors and well-linked partners, China and ASEAN has the unique advantage to carry out the exchange and cooperation of cyber culture, said some speakers who also analyzed development trends and explored paths for further cooperation.

As the region innovates new channels for political and economic cooperation to sustain development amid global uncertainties, more people-to-people comings and goings will facilitate mutual understanding and trust among the peoples, said Chen Lisheng, president of Guangxi Academy of Social Sciences.

The Silk Road itself has been a road for exchanges of different cultures and civilizations for centuries, he noted at the 11th China-ASEAN Think Tank Strategic Dialogue Forum on Sept 18.

“A social and cultural community is one of the three major pillars for ASEAN and China, he told the forum in the capital of Guangxi Zhuang autonomous region. By building such a community the region will eventually realize people-based strategic design and lead to their happiness.

Increasing communication to make up for the lack of trust on certain issues and other challenges facing the region was also noted by guest speakers from the region at the 11th China-ASEAN Think Tank Strategic Dialogue Forum. 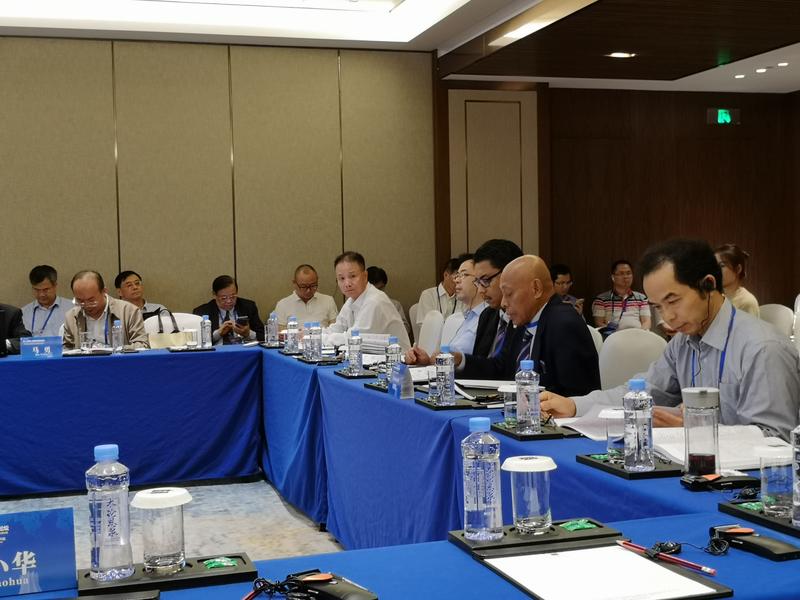 Prof Tang Zhimin, dean of International College of Panyapiwat Institute of Management from Thailand, noticed the varied translations of the major theme of BRI could cause misunderstandings. “A clear layout of the principles of gongshang, gongjian, gongxiang (in Chinese pinyin) is the key for mutual understanding of BRI partners,” he said.

At the forum, he said he would rather clarify the principles by putting them as “plan together, build together and benefit together.” Planning together engages active participation of BRI partners to initiate BRI projects based on their local development needs and strategies; Building together requires partners to pool resources together with technology transfer, utilize local materials with more value added and build up capacity for future growth; Benefiting together insides people to share benefits based on transparent and fair rules of market mechanism, as is in inclusive development for environment-friendly local communities. 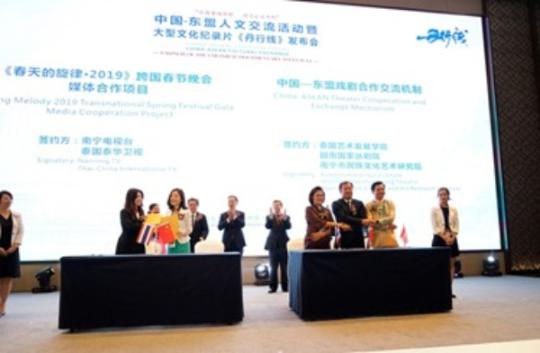 Media groups join in the signing of agreements during the Launch of the Cultural Document Dan's Way and China-ASEAN Cultural Exchange "A Heart-Touching Tour Beyond Borders" held in Nanning, South China, on Sept 12, 2018. (PHOTO PROVIDED TO CHINA DAILY)

This year, Nanning has held a series of cultural events during the September CAEXPO season to mark the 15th anniversary of China-ASEAN Strategic Partnership. It also hosted offline cultural shows for arts and crafts, designs of youths, folk dances and folk songs as well as tourism promotions before and during 15th China-ASEAN Expo.Wan Maisarah Binti Md. Isa, Principal Assistant Secretary of International Division with the Ministry of Human Resources of Malaysia, noted that the migration of skilled workers between China and ASEAN is a good initiative to achieve sustainable development. She said the two regions can provide on-job training for them and create platforms to improve understanding of each social culture.

Delegates to the cultural forum comprised of Yu Qun, a senior official with the Chinese Ministry of Culture and Tourism, vice-governor of Guangxi Li Bin and senior officials from Cambodia, Vietnam and other countries. The forum encouraged the development of innovative cultural sectors.