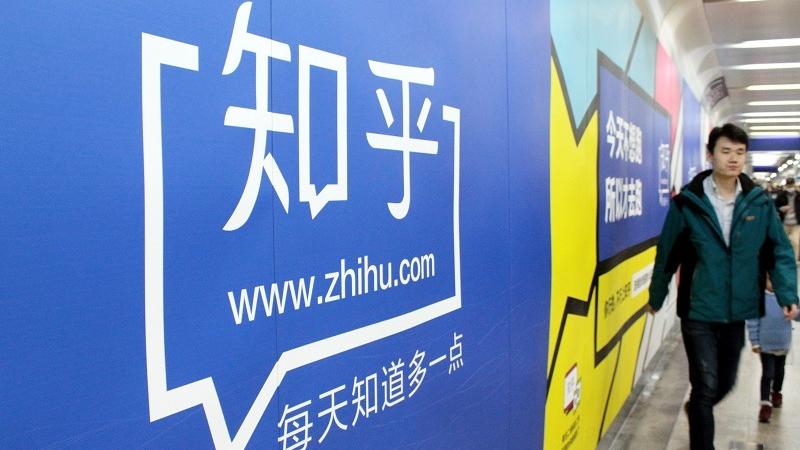 A pedestrian walks past a Zhihu billboard in Nanjing, capital of Jiangsu province. (PROVIDED TO CHINA DAILY)

"If you have a question, search on Zhihu."

Chinese viewers who watched the 2018 World Cup will certainly remember the much-watched commercial for Zhihu, a popular question-and-answer service provider. In the commercial, Chinese actor Liu Haoran asks the viewer again and again what Zhihu is. Though some viewers found the commercial disturbing, it actually worked for Zhihu.

Launched in 2011, the Quora-like knowledge sharing platform is no longer a simple follower of the foreign trendsetter. Fueled by forward thinking investors and venture capital firms, Zhihu is actively embracing the burgeoning paid content boom across the nation, extending to far more businesses than its foreign counterparts do.

"The knowledge service market is huge," said Zhou Yuan, founder and chief executive officer of Zhihu. "It is so huge that the market will be worth hundreds of millions of yuan in the future.

"Currently, the local market is still in its early stages, lacking sufficient services and products that can meet the specific needs of users. As a knowledge sharing platform, Zhihu is dedicated to connecting knowledge service providers with consumers in a more efficient way."

Currently, the local market is still in its early stages, lacking sufficient services and products that can meet the specific needs of users

The Beijing-based website and app has already proved to be a runaway success. It has transformed from a previous invitation-only community into a platform that aims to serve the whole nation, gearing up to expand the paid-for-content business. And the community has also shifted the focus from targeting the elite groups to the general public.

By the end of August this year, Zhihu had gained more than 200 million registered users, up by more than 100 percent year-on-year. The company said it has accumulated more than 120 million answers. Statistics from app tracker Analysys Qianfan show Zhihu had more than 16 million monthly active users in September.

Zhihu's revenue mainly comes from advertisements and the paid-for-content business. During the first six months of this year, it reported a 340 percent year-on-year growth in revenue. The company, however, did not disclose the exact figures on profits or losses.

The company has also upgraded its previous function Zhihu Market and renamed it Zhihu University, to offer a wider range of paid knowledge services, such as online courses, audio books and training camps. Its services span the genres of general knowledge, professional knowledge and content related to people's interests and hobbies.

"The younger generation is more willing to learn knowledge heuristically and interactively. We hope that the Zhihu University will offer standardized content and comprehensive knowledge services, to help users have better access to the knowledge they really need," Zhang said.

With more than 5,000 content producers, the platform provides a total of over 15,000 paid knowledge service products, gaining more than 6 million paid users.

Investors have also shown great interest in the knowledge economy model. In August, Zhihu secured a US$270 million Series-E funding round from an unnamed group of investors. The company is now believed to have a valuation of around US$2.5 billion.

Supported by the new investment, the company is gearing up to build a national knowledge content platform, increasing investment in artificial intelligence technologies, content ecology, knowledge services and commercialization.

"We are looking to build a smart community for the general public users, with AI and user generated content at the core," Zhou said.

According to him, AI and big data technologies will help recommend to users the topics they have interests in, better match suitable answers with the questions as well as identify harmful information and behavior in the community.

Andrew Malcolm, chief marketing officer at Silicon-based information organization application Evernote, said there has been a growth in the trend of gaining access to valuable information and the willingness to pay for it in China, which is hardly seen in other countries.

"Knowledge economy has huge potential, driven by the cultural thirst for ongoing improvement, like self-improvement and learning. The acceptance or encouragement of micro transactions around knowledge and content is really pushing everybody to realize that money can be made from content," said Malcolm.