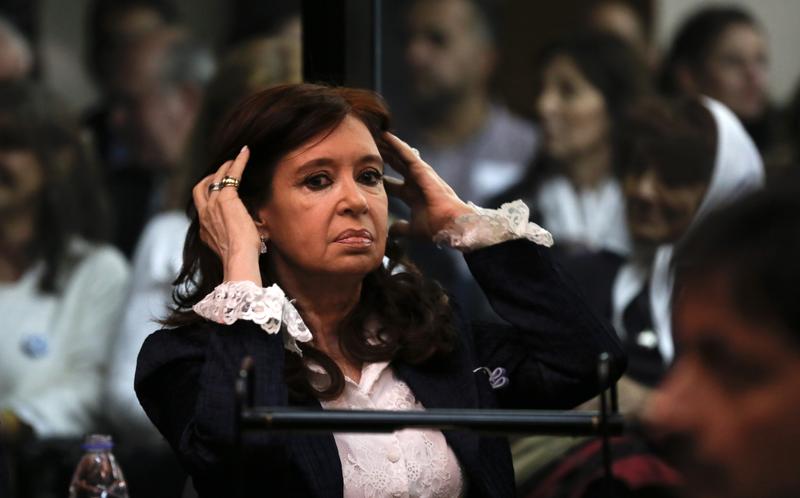 Former President Cristina Fernandez pushes her back while sitting inside a federal courtroom, in Buenos Aires, Argentina, May 21, 2019. (MARCOS BRINDICCI / AP)

BUENOS AIRES — Argentina's former President Cristina Fernández appeared in court Tuesday for the first in a series of corruption trials ahead of a planned run for the vice presidency.

The trial comes just days after Fernández surprised Argentines by announcing that she would seek the vice presidency, with her former Cabinet chief Alberto Fernández at the top of the ticket. She had been expected to run directly against conservative President Mauricio Macri during the October election.

This is a new act of persecution with only one goal: to place a former president who opposes the current government in the defendant's bench during a presidential campaign

Security agents cordoned off the federal courtroom in Buenos Aires as Fernández arrived to face charges of heading "an illegal association" for embezzlement involving public works projects during her 2007-2015 presidency. She denies any wrongdoing and she remains a highly popular if divisive figure among Argentines.

"A new trial where I should have never been summoned is beginning," Fernández said on Twitter. "This is a new act of persecution with only one goal: to place a former president who opposes the current government in the defendant's bench during a presidential campaign."

At the courtroom, she listened to the charges against her while she sat next to her attorney, but she did not comment. Politicians, union leaders and human rights leaders supporting her sat nearby separated by a glass panel. Outside, dozens of sympathizers chanted her name and waved national flags in sky-blue and white. In separate cases, Fernández faces formal investigations into allegations of money laundering and criminal association during her administration and that of Nestor Kirchner, her late husband and predecessor.

Although several former Argentine presidents have faced trials, Fernández is the only one to do so while having a clear chance of returning to power.

The weekend announcement that Alberto Fernández — no relation — would instead lead the ticket shook up the election race and forced political parties to rethink their strategies.

Analyst Roberto Bacman of the Buenos Aires-based Center for Public Opinion Studies said that Fernández's announcement shifted the spotlight from the trial and softened her image before the judges.

"It's not the same, the photo (of her) sitting on the bench as a candidate for president, as the photo of Alberto Fernández on some act on the campaign trail," he said.

Many voters are frustrated by Argentina's recession and one of the world's highest inflation rates and blame Macri for policies that they say have deepened the crisis. The Argentine peso also lost more than half of its value versus the US dollar last year.

Cristina Fernández is known for her populism and unorthodox economic policies, and while some credit her for leading Argentina out of an economic crisis, others blame her for creating its current turmoil.

Macri promised to curb inflation and end poverty, but so far has failed on both counts. He was forced to seek a record US$56 billion bailout loan from the International Monetary Fund to try to tame the crisis.

The trial is happening "because Macri knows that without it, Cristina wins," Nelson Chiavetti, a Fernández sympathizer said outside the courtroom. 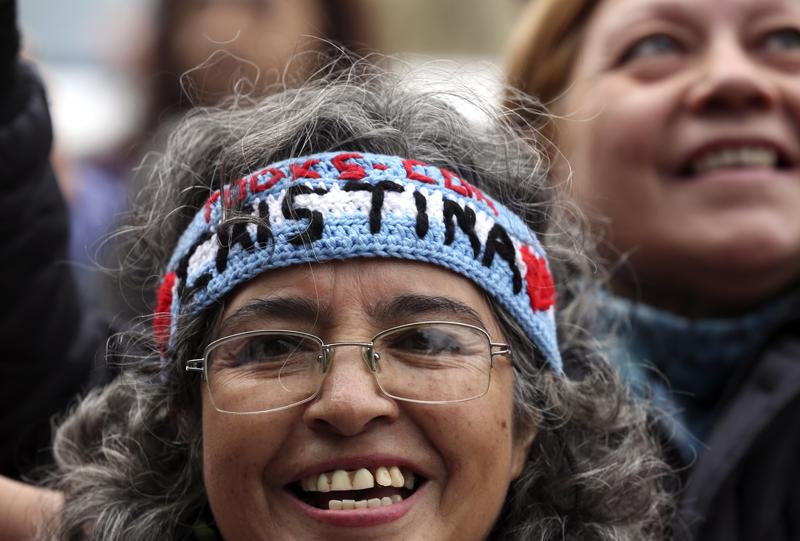 Supporters of former President Cristina Fernandez gather outside a federal court as Fernandez appears for the first in a series of corruption trials, in Buenos Aires, Argentina, May 21, 2019. (MARCOS BRINDICCI / AP)

Fernández is accused of receiving bribes on public works contracts in the southern province of Santa Cruz for Lazaro Báez, a businessman who was close to her and her late husband. Her running mate, who also served as Cabinet chief during her late husband's presidency, is now one of the at least 150 witnesses in the case.

"Cristina will be able to prove that the charges are false," Alberto Fernández told reporters. "It's silliness that she's involved in this case."

If found guilty she could face up to 15 years in prison, although her senatorial immunity protects her from arrest.

The Supreme Court ruled last week that it would review the federal court file to evaluate legal arguments presented by the Fernández and others who are accused.

But the top court later said the trial would start as scheduled governing-party politicians complained that the ruling seemed aimed at protecting Fernández. Many Argentines also took to the streets of the capital banging pots in protest to demand the trial.