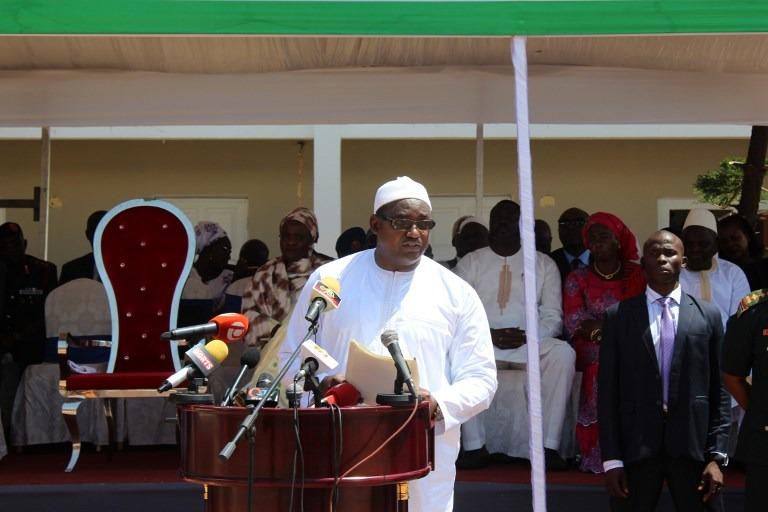 Gambian President Adama Barrow delivers a speech at the Dune's Resort, in Kotu, near Banjul, Oct 15, 2018. The tiny West African state of The Gambia on Oct 15 swore in an 11-member commission tasked with shedding light on summary executions, disappearances, torture, rape and other crimes under ousted dictator Yahya Jammeh. (CLAIRE BARGELES / AFP)

BANJUL — The Gambia has launched a truth, reconciliation and reparations commission to lay bare abuses committed under the 22-year rule of former leader Yahya Jammeh, with President Adama Barrow declaring the country's "dark days" are over.

The long-awaited commission is meant to help heal the tiny West African nation after years of extrajudicial killings, torture and abuses in phony "HIV treatment" centers.

It also is expected to lay the groundwork for possible prosecution of Jammeh, who flew into exile in Equatorial Guinea in early 2017, and others. The new government under Barrow, who handed Jammeh a surprise election defeat at the head of an opposition coalition, has vowed to deliver justice to victims.

Speaking on Monday to a crowd that came to witness what many have called a historic moment, Barrow called on Gambians to stand together and say never again would a few people subject the country to oppression.

The president stressed the government's commitment to put victims at the center of the process: "It is for this reason that we included reparations."

The Gambian-born prosecutor of the International Criminal Court, Fatou Bensouda, said the commission will help the country write a new chapter and that in order to move forward "it must reckon with its past."

It is not an exercise in settling political scores, she said.

The 11-member commission will investigate human rights abuses committed between July 1994 and January 2017. It has the power to subpoena alleged perpetrators.

Already, the new freedoms in The Gambia have inspired growing demands for justice.

"We know so much more today about the crimes of Jammeh's government than we did a year ago, and when the truth commission is finished hearing from all the victims we should have a complete picture," said Reed Brody of Human Rights Watch, who has been working with victims.

Justice will be done but there will be no witch hunt, the minister said.

The head of the Gambia Center for Victims of Human Rights Violations, Sheriff Kijera, said the organization has documented hundreds of cases. He deplored the fact that some alleged perpetrators and enablers of the Jammeh era continue to hold "lucrative positions" in the government and security forces.

"Many victims suffered terrible human rights violations for many years," he said. "Some have high expectations of what the TRRC will be doing for them."