Michael Kretschmer, Saxony's State Premier and top candidate of his conservative CDU party drinks a beer after he took part in a TV show at the German channel ZDF following the first exit polls in state elections in Saxony on Sept 1, 2019 in Dresden, eastern Germany. (RONNY HARTMANN / AFP)

BERLIN — German Chancellor Angela Merkel's center-right party is ruling out working with a far-right rival that took a quarter of the vote in two regional elections Sunday.

Annegret Kramp-Karrenbauer, the leader of Merkel's Christian Democratic Union, said Monday that the outcome in the eastern state of Saxony was a "difficult result."

The CDU received 32.1% of the vote, against 27.5% for the far-right Alternative for Germany. The environmentalist Green party stands the strongest chance of partnering with the Union, an option polls suggest would also be most likely at the national level if there were a general election.

The trend was mirrored in neighboring Brandenburg state, where it took 23.5%, coming behind the center-left Social Democrats who took 26.2%. 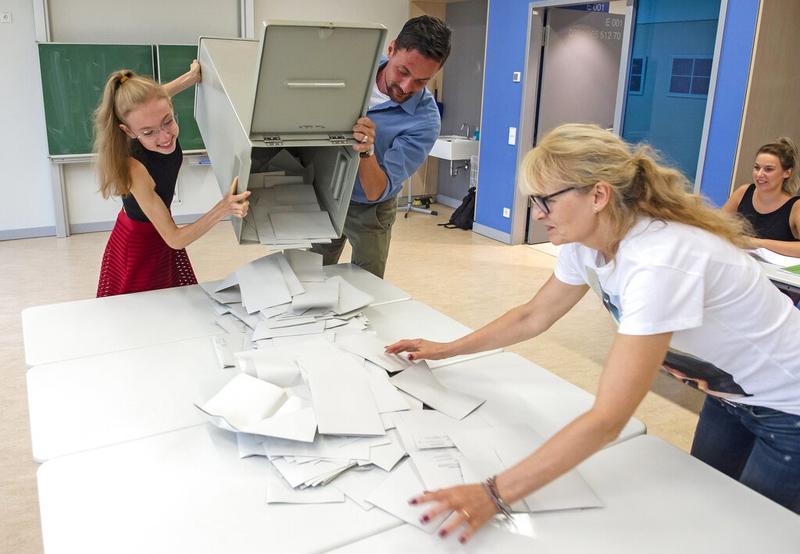 Election workers open one of the ballot boxes during the procedure for counting votes in a polling station, the secondary school Buehlau, in Dresden, eastern Germany, Sept 1, 2019. (JENS MEYER / AP)

The AfD harnessed voter anger over refugees and the planned closure of coal mines in the formerly communist eastern states, casting itself as the heir of the demonstrators who brought about the fall of the Berlin Wall three decades ago.

The AfD harnessed voter anger over refugees and the planned closure of coal mines in the formerly communist eastern states, casting itself as the heir of the demonstrators who brought about the fall of the Berlin Wall three decades ago

The ruling parties' setbacks were not as major as feared and the results alleviate some pressure on the national coalition led by Merkel, who has loomed large on the European stage since 2005, and could reassure a European Union unnerved by Brexit.

"The results are a reminder of how little CDU and SPD would stand to gain from new elections right now. That might help stabilise Merkel's position, at least for now," said Carsten Nickel, managing director at Teneo, a consultancy.

Much depends on the SPD, which rules with the radical Left party in Brandenburg. The party sank into turmoil after its worst performance in European elections in May, is polling close to record lows and is still searching for a leader.

Many SPD rank-and-file members want to quit a ruling national alliance that has supported Merkel for 10 of her 14 years in power and rebuild in opposition.

Thorsten Schaefer-Guembel, one of the SPD's caretaker leaders, said the coalition was working constructively.

"There is no question there are differences on substance ... but it is clear that this coalition will carry on," he told ZDF television, adding the parties were focusing on issues such as an ambitious climate protection package.

CDU and SPD leaders were relieved at holding off the AfD.

"We have done it. This is a message that goes out from Saxony. The friendly Saxony has won," Michael Kretschmer, CDU state premier of Saxony, told supporters to loud applause. "This is a really good day for our state."

Some members of the CDU, currently in coalition with the SPD in Saxony, have flirted with the idea of cooperating with the AfD, but Kretschmer, and the federal party, have ruled this out.

The next few months will be crucial if the already rocky national coalition is to survive until a federal election due in 2021, with the eastern votes, including a third in Thuringia in October, and the direction of policy both critical.

The parties are due to review the coalition, weakened by rows over migrant policy, tax and pensions, by the year's end.

"Now we need to deliver in the autumn," said Ralph Brinkhaus, leader of the CDU's group in the national parliament.

Voters went to the polls in Brandenburg and Saxony against the backdrop of a growing risk of recession in Germany - a threat that is raising tensions between the CDU and SPD as they argue over whether to shift to a more expansive fiscal policy.

Social Democrats, who control the finance ministry, want to abandon the government's so-called "black zero" balanced budget policy and raise investment but Merkel's conservatives say it is an "indispensable principle" for them.

A coalition collapse could trigger a snap election or result in a minority government - unappealing options for stability-loving Germans. National polls put the conservatives first ahead of the Greens, with the SPD trailing neck and neck with the AfD.

Heavy losses in state votes last year led Merkel, brought up in East Germany, to quit as CDU leader and announce this would be her last term as chancellor.

Her successor as party leader, Annegret Kramp-Karrenbauer, has made several gaffes since taking over and her status as Merkel's heir apparent is looking increasingly fragile.