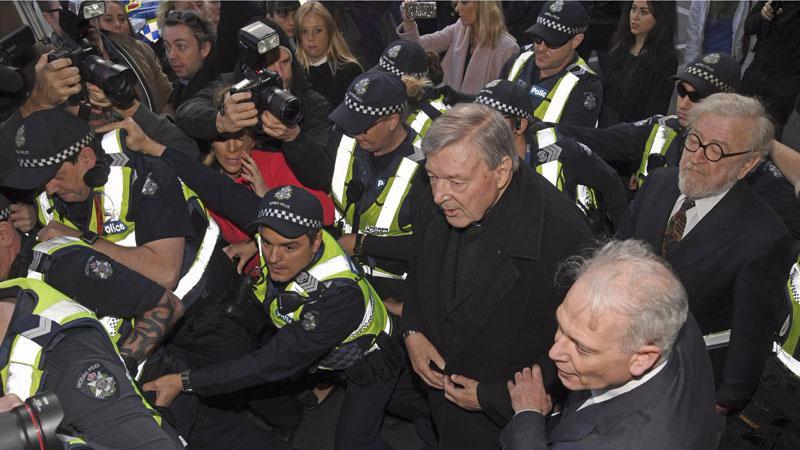 Cardinal George Pell (center right) is surrounded by police as he arrives at the Melbourne Magistrates Court in Melbourne, Australia, July 26, 2017. Cardinal Pell, is facing multiple charges of sexual assault from years ago. (Tracey Nearmy / AAP Image via AP)

MELBOURNE, AUSTRALIA — Silent but defiant, Cardinal George Pell made his first court appearance in Australia on Wednesday on charges of sexual abuse, vowing through his lawyer to fight the allegations that have rocked Rome and threatened the pope's image as a crusader against abusive clergy.

Pell is by far the highest-ranking church official ever charged, and his case has shaken the Vatican

Pell, Australia's highest-ranking Catholic and Pope Francis' top financial adviser, is accused of sexually abusing multiple people years ago in his Australian home state of Victoria, making him the most senior Vatican official ever charged in the Catholic Church sex abuse crisis. Details of the charges have yet to be released to the public, though police have described them as "historical" sexual assault offenses — meaning crimes that occurred years ago.

Pell has not yet entered a plea. But on Wednesday, his lawyer told the court that the 76-year-old cardinal plans to formally plead not guilty at a future court date.

"For the avoidance of doubt and because of the interest, I might indicate that Cardinal Pell pleads not guilty to all charges and will maintain the presumed innocence that he has," lawyer Robert Richter told the court.

Pell entered the small courtroom dressed in a black suit, face devoid of expression as he took a seat behind his legal team. He said nothing during the hearing, or to the hordes of journalists who swarmed around him as he left the courthouse.

The hearing itself lasted just minutes and was remarkably routine. Yet the image of one of the most powerful men in the Catholic Church standing before a cramped courtroom overflowing with reporters and spectators was anything but. 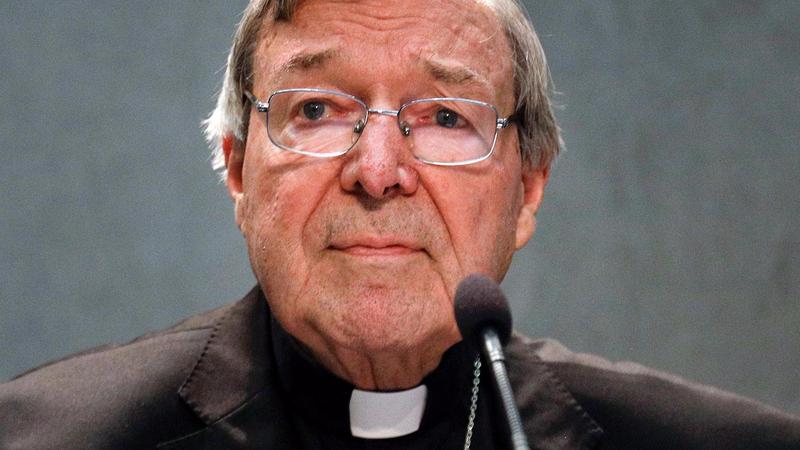 With its pedestrian setting of bland white-and-wood-paneled walls and grey carpet, the Melbourne Magistrates' Court could scarcely have been further in both geography and atmosphere from the ornate and hallowed halls of the Vatican. Though many clerics have faced allegations of sex abuse in recent years, Pell is by far the highest-ranking church official ever charged, and his case has shaken the Vatican.

After years of alleged cover-ups and silence from the church over its pedophilia scandal, abuse survivors and their advocates hailed the prosecution of Pell as a monumental shift in the way society is responding to the crisis.

"The world is watching," said Cathy Kezelman, president of the Blue Knot Foundation, an Australian victims' advocacy group. "The sheer fact that these allegations are proceeding to prosecution attests to a major societal shift whereby bastions of power and hierarchical structures, previously unassailable, are being brought to justice and account." Pell was flanked by Victoria state police officers as he entered the courthouse, where he received a smattering of applause from several local parishioners who attended the hearing to support the cardinal. To them, Pell has been unfairly condemned before the facts of the case are known.

"We're coming here open-minded — we'd like to hear the facts," said Trevor Atkinson, who has met Pell previously. "It's really a matter of giving him a fair go."To others, the appearance in court of one of the church's most esteemed officials was a long overdue acknowledgement of the suffering felt by so many victims of clergy abuse.

Julie Cameron of Melbourne stood outside the courthouse holding a painting of Mary cradling an infant Jesus — an image she said was symbolic of the church's duty to protect children. 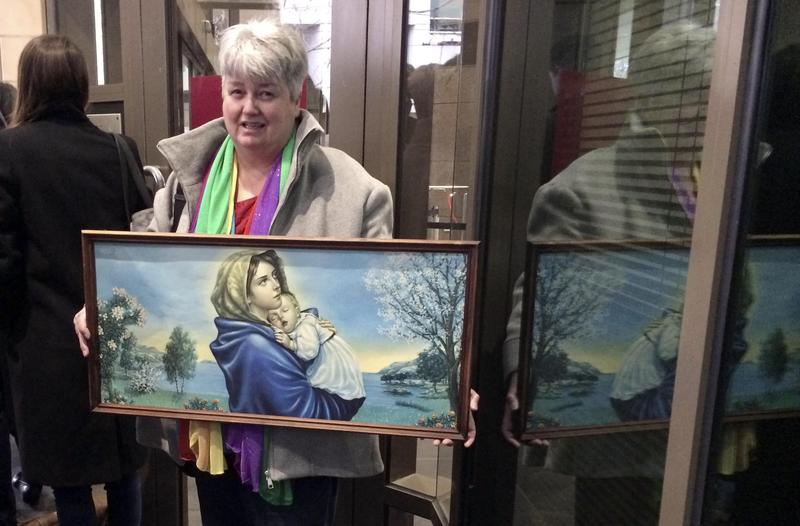 Julie Cameron, of Melbourne, holds a painting of Mary cradling a baby Jesus outside Melbourne Magistrates' Court Wednesday, July 26, 2017. Cameron is waiting for the hearing of Cardinal George Pell, who is facing multiple charges of sexual assault from years ago. (Kristen Gelineau / AP)

"This is where the actual Catholic Church has to go through renewal," Cameron said. "It has to acknowledge the crimes that were committed on children." As Pell left the courthouse, a dozen Victoria police officers formed a protective circle around him, pushing their way through a media scrum as protesters and supporters shouted at the cardinal.

"We love you Cardinal Pell!" one woman yelled, while another screamed: "You were supposed to protect the children!" Elida Radig of Melbourne wept as Pell was swept away from the crowd, overwhelmed by the magnitude of the event.

"We have to be proud that here in Australia and here in Melbourne ... we are calling them to account," she said through tears. "We are leaders. We are going to clean up the church. We are going to clean up the whole world, protecting the children." The case places both the cardinal and the pope in potentially perilous territory. For Pell, the charges are a threat to his freedom, his reputation and his career. For Francis, they are a threat to his credibility, given he famously promised a "zero tolerance" policy for sex abuse in the church. Advocates for abuse victims have long railed against Francis' decision to appoint Pell to the high-ranking position in the first place; at the time of his promotion in 2014, Pell was already facing allegations that he had mishandled cases of clergy abuse during his time as archbishop of Melbourne and, later, Sydney. 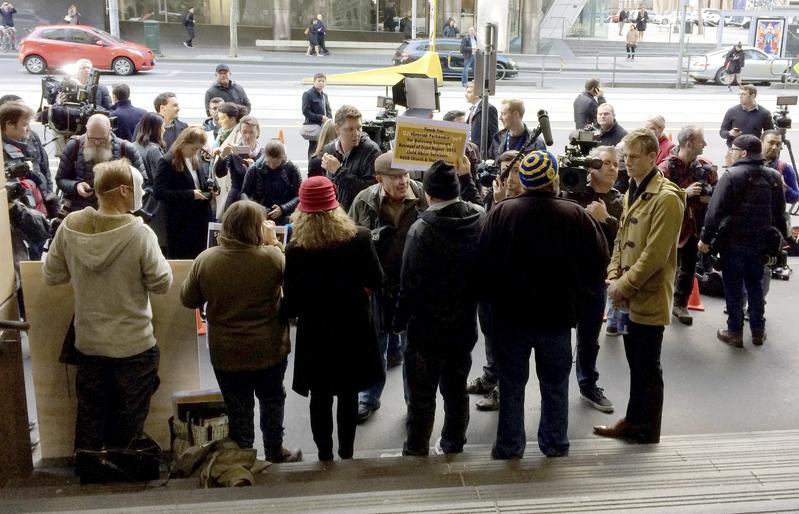 Protesters and media gather outside Melbourne Magistrates' Court Wednesday, July 26, 2017. They are waiting for the hearing of Cardinal George Pell, who is facing multiple charges of sexual assault from years ago. (Kristen Gelineau / AP)

So far, Francis has withheld judgment of Pell, saying he wants to wait for Australian justice to run its course. And he did not force the cardinal to resign, though Pell took an immediate leave of absence so he could return to Australia to fight the charges. Pell said he intends to continue his work as a prefect of the church's economy ministry once the case is resolved.

In recent years, Pell's actions as archbishop came under particular scrutiny by a government-authorized investigation into how the Catholic Church and other institutions have responded to child sex abuse. Australia's Royal Commission into Institutional Responses to Child Sexual Abuse — the nation's highest form of inquiry — revealed earlier this year that 7 percent of Catholic priests were accused of sexually abusing children in Australia over the past several decades.

In testimony to the commission last year, Pell conceded that he had made mistakes by often believing priests over those who said they had been abused. And he vowed to help end a rash of suicides that has plagued abuse victims in his hometown of Ballarat.

But over the past year, the allegations against Pell moved beyond the way he had handled cases of clergy abuse to accusations that he, himself, had committed abuse. Australian detectives flew to the Vatican to interview him last year and last month, he was formally charged.

The cardinal is next expected in court on Oct. 6.

Anne Barrett Doyle of BishopAccountability.org, an archive of clerical sex abuse documents, said in a statement that while Wednesday's hearing was procedural, its impact would be felt across the world.

"Whatever the outcome of the case against Pell, his presence today in a secular courtroom marks the victory of transparency over secrecy, and of the rule of law over the Vatican's failed strategy of containment," she said.