Alvarez stops Fielding in 3rd round for 3rd division title

Alvarez landed dozens of body punches, knocking down Rocky Fielding four times and stopping him in the third round to earn his third weight class title, taking the WBA super middleweight belt.

Coming off his close decision against Gennady Golovkin three months ago to take the WBA and WBC middleweight titles, Alvarez could hear chants of "Canelo! Canelo!" long before he entered the Madison Square Garden ring for the first time. Throughout a lengthy undercard, it was clear who the sellout crowd of 20,112 came to see and cheer.

Only eight other Mexican fighters have held three division titles

He delivered with power and precision, landing 73 punches, 35 to the body.

"That was the plan in the gym, to hit the body and then move up, and that's the result," Alvarez said through an interpreter. "You see the result here."

Only eight other Mexican fighters have held three division titles. And Alvarez, 28, says he is headed back to the 160-pound class he rules, with possibly a third go with Golovkin in 2019. The next fight, opponent unknown, is set for Las Vegas in early May.

"Canelo will fight whoever is the best, no doubt about it," said his promoter, Oscar De La Hoya.

If this was a one-off at 168 pounds, it was quite a show in his debut at Madison Square Garden. 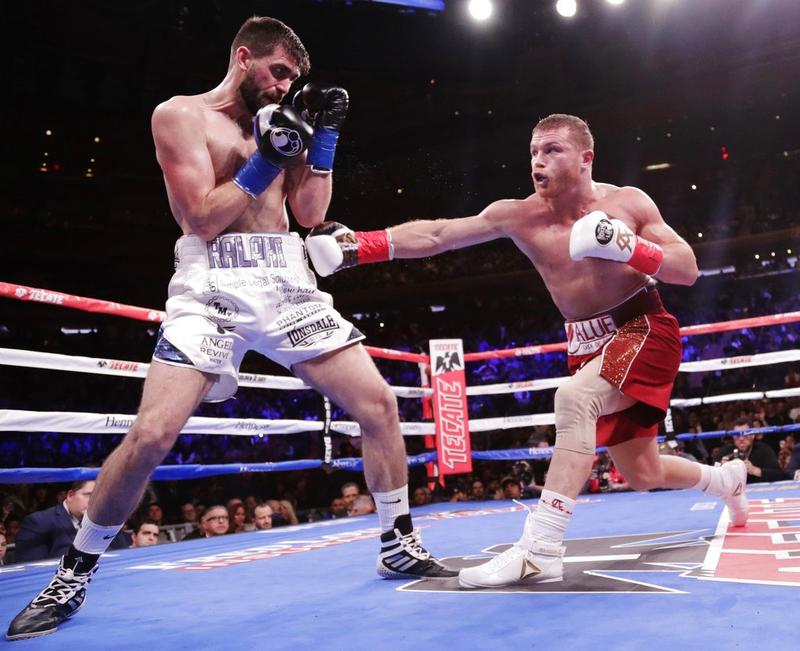 "My goal is to make good fights for the people, for the public, and to make sure the name of Canelo Álvarez and of Mexico is held up high," Alvarez said.

Fielding, 31, won the WBA crown in July when he knocked out Tyron Zeuge in Germany in the fifth round. But the Englishman had never faced anyone close to Canelo's class, and it showed.

"I never shied away from the challenge," Fielding said. "I lived the dream, I'll come back.

"He is strong and all that. It was the body shots, the wind he took away. He placed the shots well and he caught me. I stood too long to try to mix it with him when I shouldn't have.

The fight ended with 22 seconds remaining in the third after two knockdowns in the round.

Fielding came to fight, but was outmanned from the outset. He couldn't block the bevy of body punches launched by Alvarez, who floored Fielding with a left in the first round.

England's Rocky Fielding (right) takes a knee after being knocked down by Mexico's Canelo Alvarez (left) during the first round of a WBA super middleweight championship boxing match in New York, Dec 15, 2018. (FRANK FRANKLIN II / AP)

Alvarez did it again with a right to the head and a left to the body late in the second round, and that brought down Fielding's hands enough to expose the head.

So Alvarez used a huge right lead to knock down Fielding in the third round, and soon after finished it with a series of blows.

It really was no contest.

"What I always want to do is to make the best fight whether they're for world titles or not," Alvarez said, then turned his attention to the Garden scene.

"I'm happy and I'm grateful to be here. I hope this is the first of many."

The fight card was streamed on DAZN, a service that paid Alvarez US$365 million for 11 fights. This was quite a selling point for the red-headed Mexican.

On the undercard, Tevin Farmer started fast, then coasted to a unanimous decision over Francisco Fonseca to hold onto his IBF super featherweight belt.

Farmer lost to Kenichi Ogawa for the IBF title last year, but Ogawa then failed a drug test and the bout was declared a no contest. He outpointed Billy Dib in August for the belt, then defended by stopping James Tennyson in October. 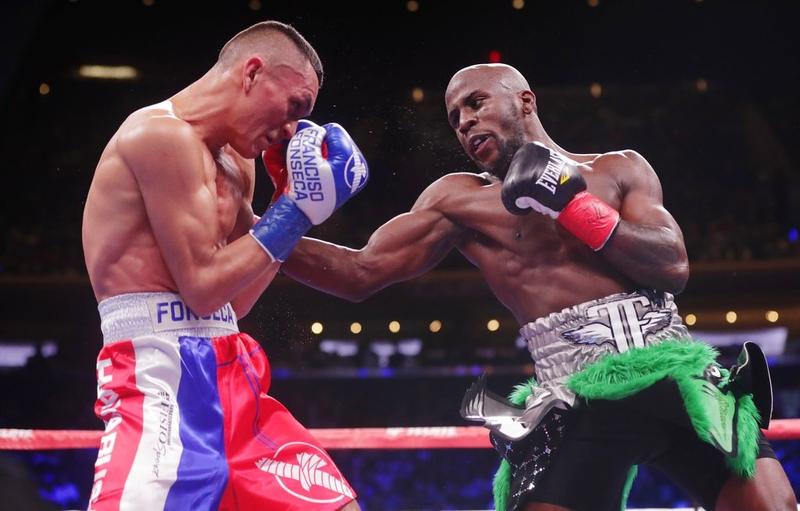 "Nowadays, I really have a lot of anger built up, good anger though," he said, "and I just want to hurt everybody when I'm in the ring. I don't have no sympathy."

Farmer is 28-4-1, while Fonseca is 22-2-1. Costa Rican Fonseca's other loss came in his only previous title fight, to Gervonta Davis for the same crown in 2017.

Katie Taylor of Ireland won a lopsided 10-round decision over Finland's Eva Wahlstrom to keep her IBF and WBA lightweight championships. She is now 12-0, while Wahlstrom lost for the first time in 24 fights.

Super featherweight Lamont Roach Jr. easily outpointed Alberto Mercado, running his record to 18-0-1. Roach controlled the fight from the outset and took it easy late, which nearly cost him when Mercado (15-2-1) nailed him with several hard shots in the final round.

Rising lightweight Ryan Garcia had no trouble running his record to 17-0 with 15 knockouts by stopping Braulio Rodriguez in the fifth round. Rodriguez's repertoire included more clowning and low blows than fighting, and Garcia ended it with a sharp right, followed by a series of head shots.