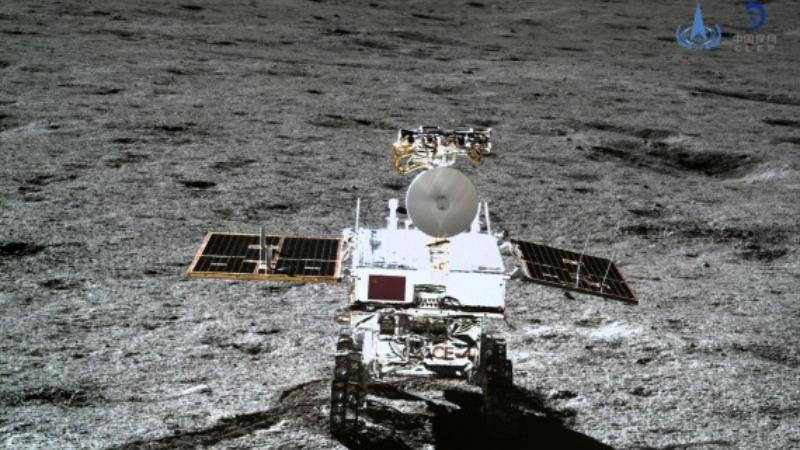 BEIJING -- China's Yutu-2, the first rover on the far side of the moon, has found materials from deep inside the moon that could help unravel the mystery of the lunar mantle composition and the formation and evolution of the moon and the earth.

Since the lunar crust is very thick, and there has been no volcanic activity and plate movement on the moon for billions of years, it's hard to find materials from the lunar mantle on the surface

Using data obtained by the visible and near infrared spectrometer installed on Yutu-2, a research team led by Li Chunlai, with the National Astronomical Observatories of China under the Chinese Academy of Sciences, found that the lunar soil in the landing area of the Chang'e-4 probe contains olivine and pyroxene which came from the lunar mantle deep inside the moon.

The first important scientific discovery of the Chang'e-4 probe since it made the first-ever soft landing on the far side of the moon was published online in the latest issue of the academic journal Nature.

The moon comprises a core, mantle and crust, like the earth. With the evolution of lunar magma, the light plagioclase rose to the upper layer to form the lunar crust, while the heavier olivine and pyroxene sank to form the lunar mantle, Li said.

"But since the lunar crust is very thick, and there has been no volcanic activity and plate movement on the moon for billions of years, it's hard to find materials from the lunar mantle on the surface," Li said.

The composition of the lunar mantle has long been the subject of theory. Neither the lunar samples from missions by the US and Soviet Union, nor the remote sensing probes orbiting the moon have provided direct evidence of the accurate composition.

Chinese scientists focused the South Pole-Aitken (SPA) Basin, an area on the far side of the moon, which was formed by a celestial collision over 4 billion years ago. With a diameter of 2,500 km and a depth of about 13 km, the basin is the oldest and largest impact crater on the moon.

"The data, unlike that obtained by Yutu on the near side of the moon, gave us a pleasant surprise," Li said.

So how did the materials from deep inside the moon get there?

After analyzing the high-resolution remote sensing images and the hyperspectral data, the researchers believed the materials were ejected from a 72-km-wide crater named Finsen to the northeast of the Von Karman Crater.

Li explained that after the SPA Basin was formed, more small asteroids crashed into the area, leading to more small craters. The collision that caused the Finsen Crater might have been so violent that the materials were knocked into the Von Karman Crater.

When scientists were selecting the landing site for Chang'e-4, flat areas were given priority. However, most of the flat areas on the moon are basalt formed as magma solidified.

It was lucky that Chang'e-4 probe landed in a region where the basalt is covered by lunar mantle debris.

"Furthermore, the rover is driving at the edge of the ejecta. According to our calculation, it might reach the basalt area in another 2 km or so. When it reaches the basalt area, we can compare the composition of the different lunar soils," Li said.

He said the study could provide a reference for a future mission to collect and return with samples and even the construction of a lunar base.

If the planned Chang'e-6 probe can go to that area, it would not only get the first-ever sample from the far side of the moon, but also have the chance to collect samples of materials coming from deep inside the moon, Li said.