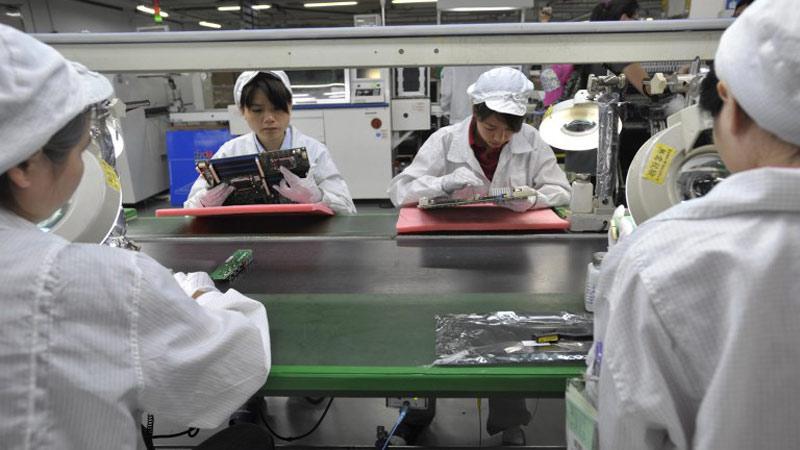 This photo taken on May 27, 2010 shows Chinese workers in the Foxconn factory in Shenzhen, Guangdong province. (AFP)

Andrew Ng, co-founder of some of Alphabet Inc-owned Google's most prominent artificial intelligence projects, on Thursday launches a new venture with iPhone assembler Foxconn to bring AI and so-called machine learning onto the factory floor.

But at a press briefing in San Francisco two days before Ng's Landing.ai venture is introduced, he demonstrated an example of using AI for visual inspection in a factory's quality control efforts.

In many factories, workers look over parts coming off an assembly line for defects. Ng showed a video in which a worker instead put a circuit board beneath a digital camera connected to a computer and the computer identified a defect in the part.

Ng said that while typical computer vision systems might require thousands of sample images to become "trained," Landing.ai's system would take only five training images, making it easier to adapt to different tasks in a factory.

Ng said Landing.ai had been approached by investors but had not accepted outside capital yet. Foxconn, known more formally as Hon Hai Precision Industry Co Ltd, is Landing.ai's first strategic partner. Ng said the startup has been working with Foxconn since July, but he would not elaborate on the nature of the collaboration or which of Foxconn's customers it might involve. Foxconn makes products for many companies aside from Apple.

He said he understands that his firm's technology is likely to displace factory workers but that Landing.ai is already working on how to train workers for higher-skilled, higher paying factory work involving computers.

"I would love to help displaced workers gain the skills they need to succeed," Ng told reporters.

Ng, a Stanford University professor, co-founded Google Brain in 2011, an effort that strung together thousands of computers that learned to identify objects like cats purely from watching YouTube videos. Researchers considered it an accomplishment because the computers had not be "taught" about cats beforehand, but learned on their own through what researchers call "deep learning."

Ng in 2014 moved to Chinese internet giant Baidu Inc to head up its artificial intelligence research group. He resigned from Baidu in March.