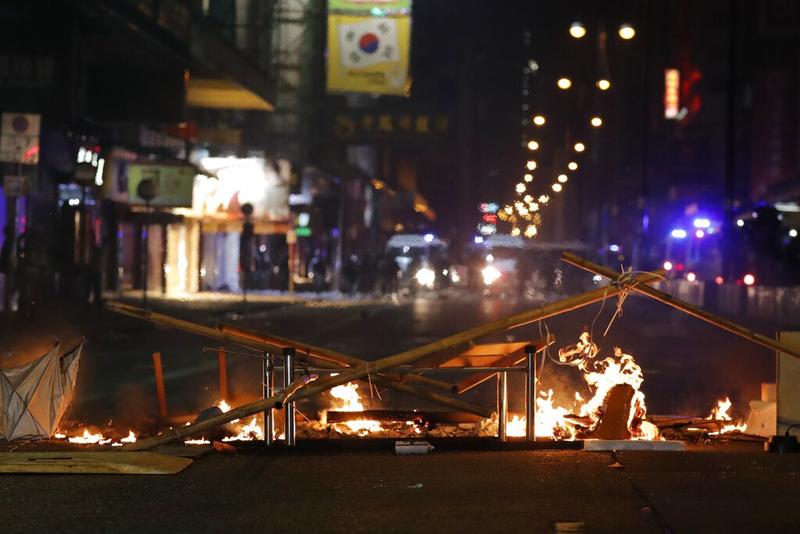 In afraid of being involved in violent incidents, Michael Chan and his family called off their plans to celebrate the festival outside. However, as their little son suddenly had a high fever, they rushed to the hospital at midnight.

He could never forget what he saw in the hospital. "At least five injured people were sent to hospital during small hours when we waited to see the doctor, " Chan said. "It is Christmas Eve for god's sake. I just can't believe it."

The Hospital Authority said in total 25 people injured were sent to hospital by 7:30 pm local time Tuesday, with one man in serious condition.

It was not the first time for a much-awaited festival to be ruined as violent protests broke out in June and quickly worsened to pure destructive activities. Radicals have never missed a single holiday, from the Golden Week and Halloween to every simple weekend.

New Year also seems unlikely to be spared as radicals have incited disruptive activities online. Given rising safety risks, the Hong Kong Tourism Board has canceled the well-known traditional New Year's Eve fireworks display over Victoria Harbor for the first time in its 10-year history.

"Hong Kong used to be one of the safest places in the world and Hong Kong people should not live in fear," Chan said. 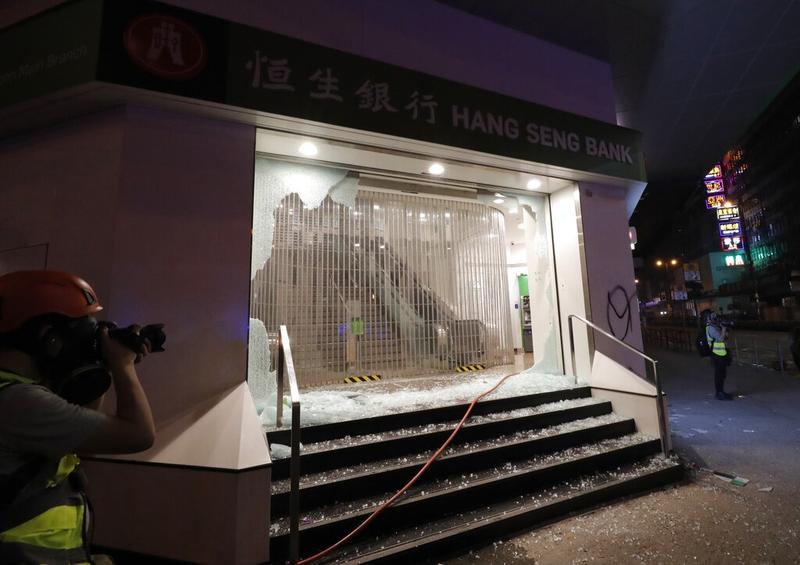 A photographer takes a photo of a broken window of Hang Seng bank during a protest in Hong Kong, Dec 25, 2019. (LEE JIN-MAN / AP)

Chief Executive of Hong Kong Special Administrative Region (HKSAR) Carrie Lam Cheng Yuet-ngor said in a Facebook post Wednesday that residents and tourists were disappointed that their Christmas Eve celebrations had been "ruined by a group of reckless and selfish rioters".

"Such illegal acts have not only dampened the festive mood but also adversely affected local businesses," Lam said, stressing that the government will try its utmost best to uphold law and order, and restore peace in Hong Kong.

Radicals rampaging in the streets have threatened the livelihood of hundreds of thousands of workers, who had struggled for months amid social unrest and would count on incomes in the peak season from Christmas to the Spring Festival to support the family.

On Christmas Eve, Leung, having been jobless for two months, had nothing to do but watch TV at home.

The HKSAR government's Immigration Department has predicted 10.65 million entries into Hong Kong during the holidays of Christmas and New Year, sharply down by 2.8 million from the same period a year ago

However, on the same day a year ago, the seasoned chef was busy in preparing dishes for diners packing in his restaurant in Mong Kok and worked till 3:00 am. On that day, revenue of the restaurants more than doubled.

After the restaurant shut down due to plunging revenue several months ago, he tried to find another job but failed. The man, who used to earn 30,000 Hong Kong dollars (US$3,850) a month, borrowed money from his friends to support the family of six. "I don't know how long I can still keep my head above water," he said.

As the violence scared off tourists and dampened the sentiment of local consumers, a wide range of industries from catering to accommodation were put to the edge of collapse.

The HKSAR government's Immigration Department has predicted 10.65 million entries into Hong Kong during the holidays of Christmas and New Year, sharply down by 2.8 million from the same period a year ago.

"Christmas is supposed to be the high season, but this year is different," said an assistant director of sales surnamed Kwok at a hotel in Causeway Bay.

ALSO READ: Outbound HK tourists to drop up to 20%

"In the last several months, the number of tourists stayed in our hotel dropped a lot and business guests also decreased," she said. Impacted by the social unrest, many international conferences and exhibitions supposed to be held in Hong Kong have been canceled or postponed. 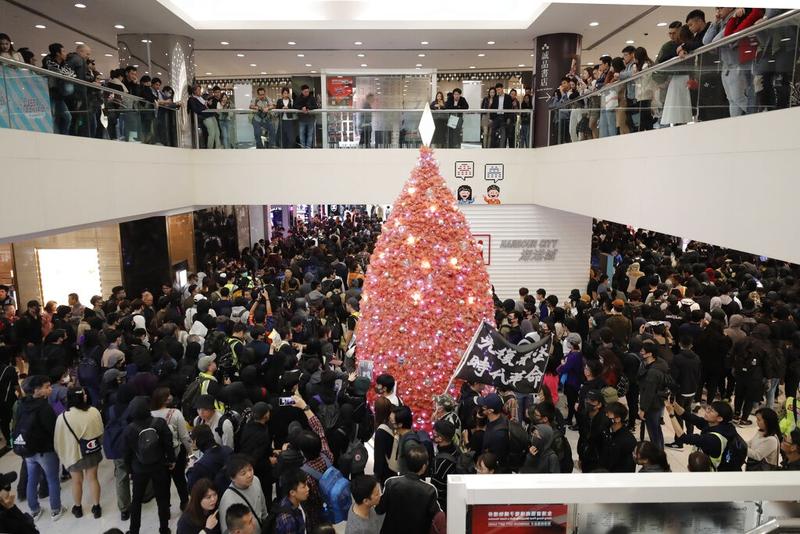 Economists have warned of mass layoffs and further economic slips in Hong Kong as long as violence cannot be stopped and social upheaval drags on.

"If the willingness to consume of tourists and local residents continues to languish in the prolonged social unrest, there may be a wave of closures of small and medium-sized enterprises and contraction of large chain groups, which will bring a heavy blow to the job market and even the entire economy," said Chow Man-kong, deputy director of China Economic Research Program of Lingnan University.

Unemployment rate in the Sept-Nov period rose to 3.2 percent, with that of the food and beverage sector at 6.2 percent, the highest level in more than eight years. The figures are highly likely to continue to spike.

Hong Kong economy, already suffering from the lackluster global trade, started to worsen in an unprecedented pace in the third quarter of the year as escalating violent incidents disrupted business activity, scared off visitors and caused severe damage to public and private property.

The economy dropped 2.9 percent year-on-year in the third quarter, sharply down from the 0.4 percent growth in the second quarter and officially plunging into a technical recession.

The HKSAR government has cut its gross domestic product forecast for 2019 to a negative 1.3 percent, which will be the region's first annual decline since 2009.

Given the grim outlook, the HKSAR government has announced four rounds of economic stimulus worth about 25 billion Hong Kong dollars (US$3.2 billion) to help businesses and individuals to weather out the hardship.

However, violence has to end and order must be restored to let the relief measures take effect and truly revive the economy, Choi Koon-shum, chairman of the Chinese General Chamber of Commence of Hong Kong, said, calling for concerted efforts from the society to resume the safe and stable business environment as soon as possible.