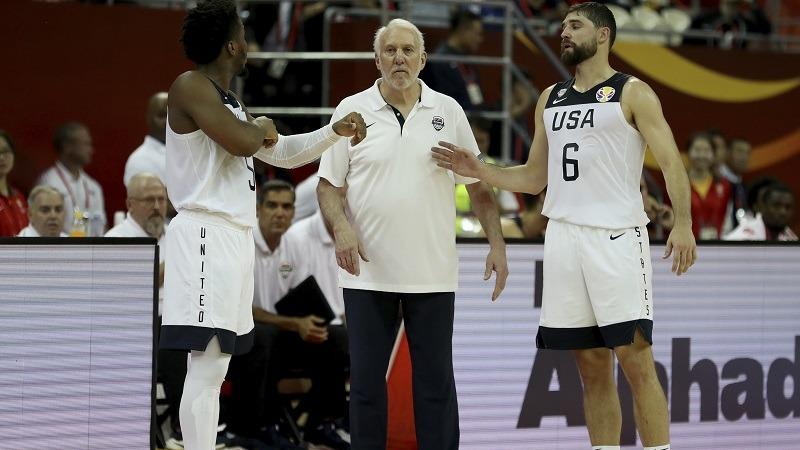 SHANGHAI - The US finally got to enjoy an easy night at the World Cup.

Jaylen Brown scored 20 points, Kemba Walker added 15 and the US rolled past Japan 98-45 Thursday in the Group E finale. And now, the stakes get higher with the Americans set to face Greece - and NBA MVP Giannis Antetokounmpo - in a second-round opener on Saturday in Shenzhen, China.

"They were very serious tonight and they respected the Japanese team very much," US coach Gregg Popovich said. "They didn't take anything for granted and they played hard. So I was pleased with their performance."

They didn't take anything for granted and they played hard. So I was pleased with their performance

Gregg Popovich, Coach, the US

ALSO READ: China misses out on FIBA WC 2nd round after Venezuela defeat

Harrison Barnes scored 14 points while Joe Harris and Donovan Mitchell each had 10 for the Americans (3-0), who are bidding for an unprecedented third consecutive World Cup title. The 45 points allowed were the fewest yielded by any team in the first round of this World Cup, the 53-point margin was the third-biggest so far in the tournament and Mitchell thought it was the best defense the Americans have played this summer.

"From the jump, I think for the full 40 minutes," Mitchell said. "We've had games where we played 30 minutes of great defense or 35 and kind of let up a little bit. I think for a whole game, to really lock in and set a tone, it was really impressive."

Yudai Baba scored 18 for Japan (0-3), which will play in classification games the rest of the way. Rui Hachimura, Japan's best player and the No. 9 draft pick this year by the Washington Wizards, was held to four points on 2 for 8 shooting.

"I've got no excuse," said Japan guard Yuta Watanabe, who scored nine points. "This is the way we are right now."

A US program that is accustomed to blowout wins, particularly when it has NBA players, hadn't enjoyed one yet in six games against international competition this summer. The biggest victory margin before Thursday was 21 in the World Cup opener against the Czech Republic, and the US came into the group finale with a plus-59 scoring differential in four exhibitions and two World Cup games. 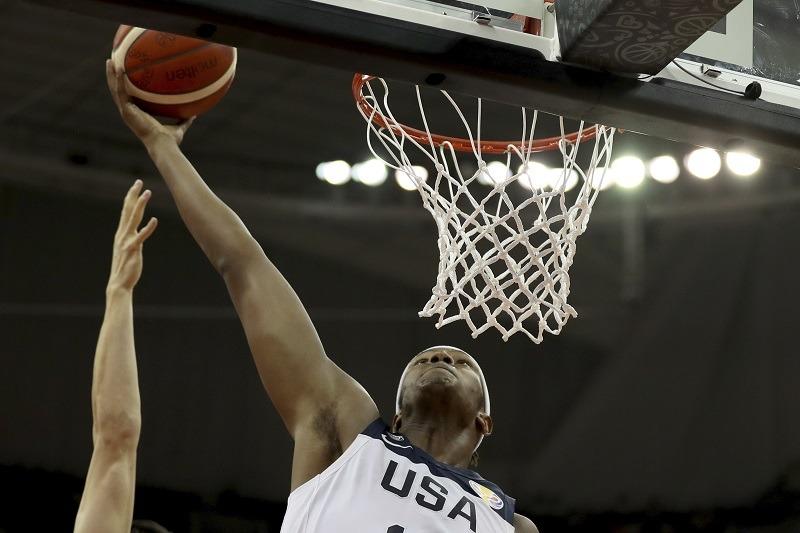 This one, two days after the Americans needed late-game heroics to beat Turkey 93-92 in overtime, was drama-free.

It was 13-0 before Japan scored, 23-9 after a quarter, 56-23 at halftime and 73-25 midway through the third quarter when Hachimura got loose for a dunk and his first points of the night. Somehow, matters could have been even worse for Japan: The US missed seven of eight shots during one first-quarter stretch and finished shooting 48% for the game.

"I think we've got a lot of room for improvement," Brown said. 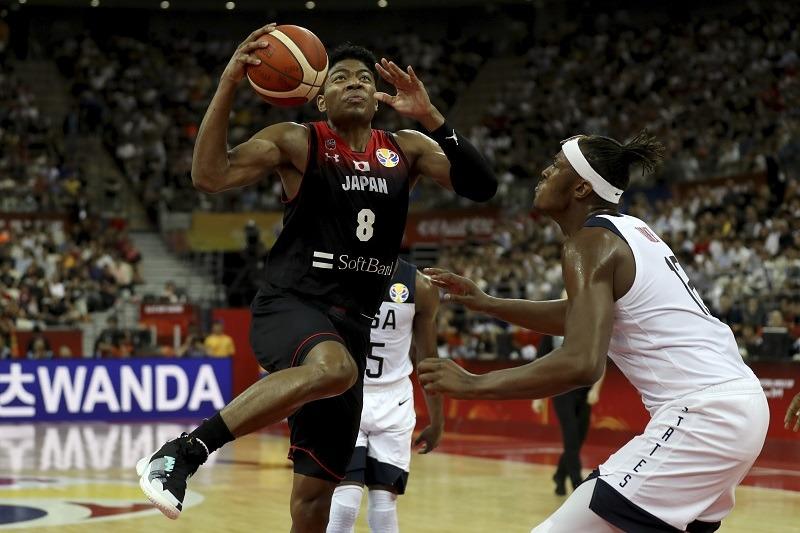 US: The Americans held a 58-33 rebounding edge. ... Harris replaced Jayson Tatum in the starting lineup. Tatum is out with a sprained left ankle and isn't scheduled to be reevaluated again until Monday. ... Marcus Smart (left quad strain) also missed the game, so the US was down to 10 healthy players and two of its four Boston Celtics. ... The Americans were flying to Shenzhen after the game.

This tournament marks the 36th different Olympics, World Cup or world championships appearance for USA Basketball. The Americans have now started 3-0 in those events 34 times, going 106-2 overall in their opening three matchups of those competitions. And this is the 19th time in those 36 tournaments where the US average victory margin in the first three games was 25 points or more.

The only victory margins bigger than the one the US enjoyed Thursday so far in this tournament: Serbia's 59-point win over the Philippines and Lithuania's 54-point win over Senegal. 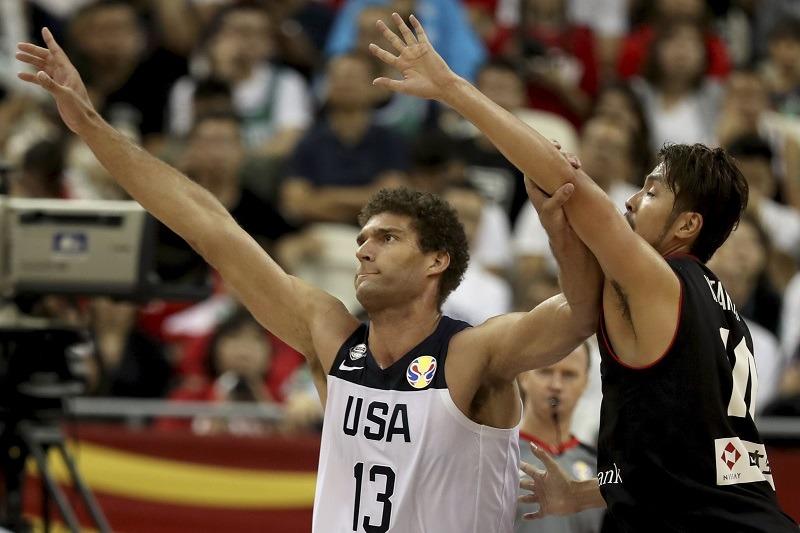 Hachimura worked out for Popovich and the San Antonio Spurs before the draft, and left a positive impression on the US and Spurs coach. "He knows what he can do, puts himself in position to be successful and score, plays D, rebounds, runs the floor," Popovich said. "He's got an all-around game. His confidence is growing and he'll be a fine player, obviously, and have a very long career."

US: Faces Greece in a second-round game Saturday at Shenzhen, China. 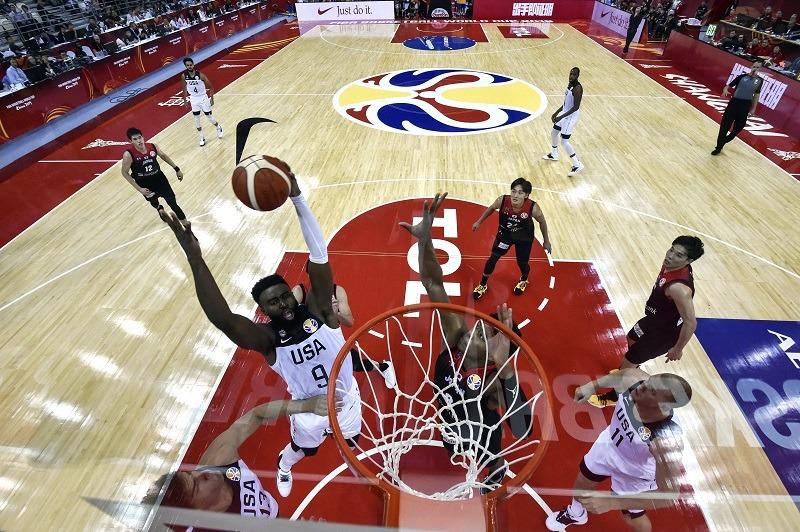 Harrison Barnes, left, of the US fights for the ball with Japan's Rui Hachimura during the Basketball World Cup Group E game between US and Japan in Shanghai, China, Sept 5, 2019. (HECTOR RETAMAL / POOL PHOTO VIA AP)