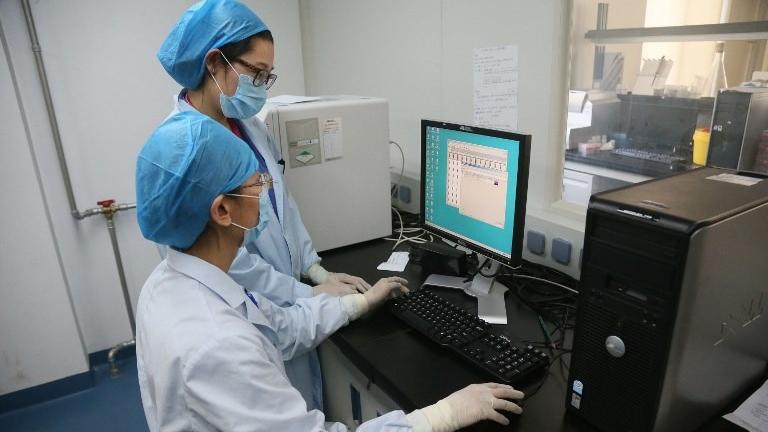 This file photo dated on April 16, 2013 shows doctors waiting for the results of an experiment as they use a computer in Beijing Center of Disease in Beijing. China will help lead a project to identify unknown viruses from wildlife to better prepare humans for major epidemics－if not global pandemics. (PHOTO / AFP)

China will help lead a project to identify unknown viruses from wildlife to better prepare humans for major epidemics－if not global pandemics. The project is to be launched this year, according to one of the country's top health officials.

The Global Virome Project will start in China and Thailand with field work to collect samples from wild animals and analyze the viruses detected, said Gao Fu, head of the Chinese Center for Disease Control and Prevention.

"Scientists will collect virus samples from animals such as bats and rats for study using techniques like next generation (DNA) sequencing to find whether new viruses exist," he said.

The project, estimated to cost up to US$1.2 billion, is expected to take 10 years and involves many countries including the US, Brazil and Nigeria.

Through more intensive and extensive study of viruses from animals that could infect humans, it may be possible to deal with viruses using preemptive controls and prevention instead of passive, reactive measures, Gao said.

"We all know there are almost certainly new viruses that could cause the next global pandemic, but based on the existing early warning capacity for diseases, we do not know, for example, which virus will cause an epidemic," Gao said.

"We are sure that new virus strains will appear in the future along with changes in our ecology, environment and human behaviors."

For instance, humans' abuse of antibiotics has lead to the potential development of superbugs.

"There are many viruses living in wild animals, so we can identify viruses and thoroughly study those that could pass to humans," Gao said. "Ideally we can develop vaccines and a diagnosis for such viruses even before they cause human epidemics."

It is known that 263 viruses can infect humans, but scientists estimate there may be more than half a million viruses that live in birds and mammals and that are unknown to humans that may be capable of infecting humans, and they are the primary subject of the project's research, Gao said.

Even if a large number of such unknown viruses are identified, it is possible that just a small fraction of them have the ability to cause major epidemics that cause human deaths, he said.

However, considering the huge cost of a major epidemic like SARS to human health and economies, the findings of the project still have the potential to greatly reduce losses through improved early diagnosis and identification of hosts vulnerable to a new virus after an outbreak, according to Gao.

A similar project carried out by the US Agency for International Development proved the feasibility of the Global Virome Project and provides helpful experience, he said.

The USAID project, known as Predict and launched in 2009, with China a participant, led to findings of more than 1,000 viruses previously unknown to humans. The project cost was over US$170 million, he said.

Some of the technologies used for that project have proved reliable and economically affordable and can be used for the Global Virome Project, Gao said.