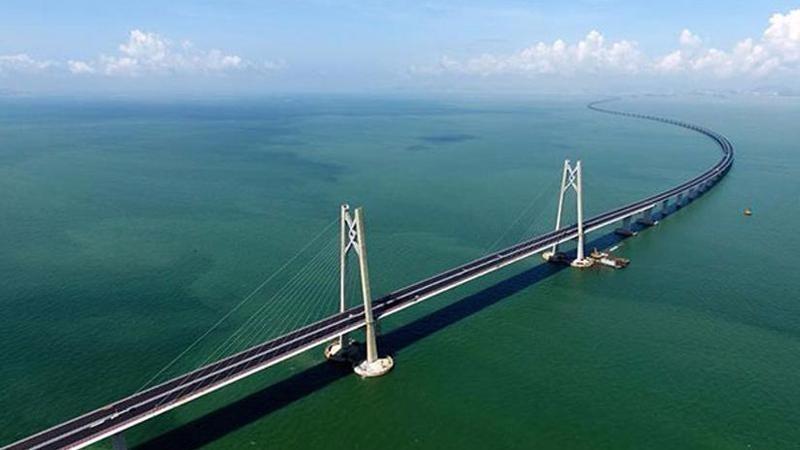 HONG KONG - The Hong Kong-Zhuhai-Macao Bridge (HZMB) Hong Kong Section project, comprising the HZMB Hong Kong Link Road (HKLR) and Hong Kong Port (HKP), was awarded Tuesday the Institution of Civil Engineers (ICE) People's Choice Award 2019, according to a press release issued by the HKSAR government on Wednesday. The project, lauded for its "remarkable achievement in project management and contribution to the enhancement of regional transportation networks," is the first major Hong Kong infrastructure project to win the award.

"The uniqueness of this infrastructure lies in its engineering achievements and bringing the three cities, Hong Kong, Zhuhai and Macao, much closer, thus enhancing the prosperity and economic development in the Guangdong-Hong Kong-Macao Greater Bay Area," said Chris Wong, the Project Manager of the Major Works Project Management Office (Special Duties) of the Highways Department.

"We are honored that the mega project has won this prestigious award. It recognizes the hard work and unyielding steadfastness of all those who contributed to achieving this engineering wonder," Wong said.

Wong noted that when constructing the Hong Kong Link Road, the design of the 180-meter-long span bridge was adopted to pass over the northern shore of Lantau Island and avoid touching the headland of Sha Lo Wan, which has significant archaeological conservation value. The construction of the Passenger Clearance Building (PCB) of the HZMB HKP is another highlight of the project.

"The roof of the PCB is designed in the form of a wave to evoke the undulating flow of surrounding waters. It is supported by a few tree-like structural columns to create an enhanced sense of spaciousness at the arrival and departure halls. Designed with abundant natural light, the PCB is an energy efficient and environmentally friendly infrastructure. The project team adopted large-scale prefabricated modules for erection of the roof for the PCB to achieve faster construction progress, enhance the quality of work and reduce the amount of working at height," he said.

The ICE People's Choice Award is a leading industry award for projects that have had a transformative effect on the built environment.