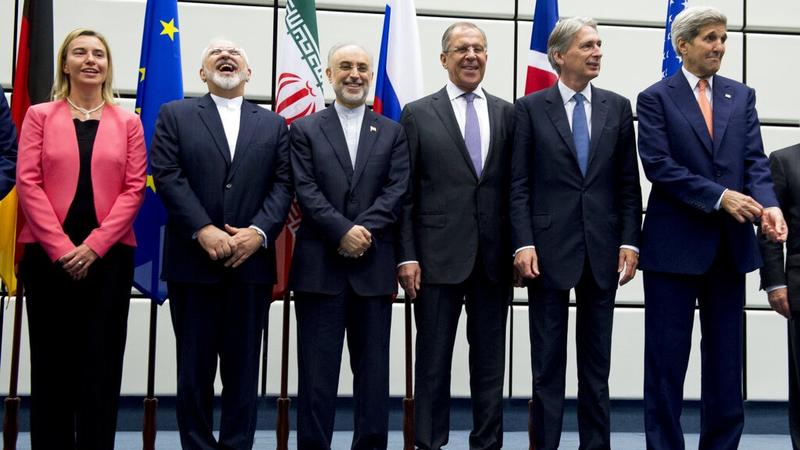 In this July 14, 2015 file photo, from left to right: European Union High Representative Federica Mogherini, Iranian Foreign Minister Mohammad Javad Zarif, Head of the Iranian Atomic Energy Organization Ali Akbar Salehi, Russian Foreign Minister Sergey Lavrov, British Foreign Secretary Philip Hammond and US Secretary of State John Kerry pose for a group picture at the United Nations building in Vienna, Austria. Iran threatened, May 8, 2019, to resume higher enrichment of uranium in 60 days if world powers fail to negotiate new terms for its 2015 nuclear deal, an agreement that capped over a decade of hostility between Tehran and the West over its atomic program. (JOE KLAMAR / POOL PHOTO VIA AP, FILE)

BRUSSELS — The European Union on Thursday urged Iran to respect the international agreement curbing the Islamic Republic's nuclear ambitions, saying it aims to continue trading with the country despite US sanctions.

We remain fully committed to the preservation and full implementation" of the deal, endorsed by the UN Security Council, according to the EU statement

The EU and major European powers — Britain, France and Germany — also said that they "note with great concern the statement made by Iran concerning its commitments" to the nuclear deal.

The joint statement came as the bloc struggles to preserve the 2015 nuclear deal with Iran, a day after a new deadline from Tehran on finding a solution to make up for last year's unilateral US withdrawal from the accord and re-imposed US sanctions on Iran.

"We remain fully committed to the preservation and full implementation" of the deal, endorsed by the UN Security Council, according to the EU statement.

The Trump administration pulled America out of the 2015 deal a year ago, saying it does nothing to stop Iran from developing missiles or destabilizing the Middle East. The Europeans insist that the pact is an important pillar of regional and global security and was never meant to address those other issues.

Iranian President Hassan Rouhani said in a televised address Wednesday that signatories to the deal now have 60 days to come up with a plan to shield his country — already laboring under economic hardship — from the sanctions imposed by President Donald Trump.

The EU powers say they "regret the re-imposition of sanctions" by the US and remain "determined to continue pursuing efforts to enable the continuation of legitimate trade with Iran."

The Europeans have set up a complicated barter-type system to skirt direct financial transactions with Iran and so evade possible US sanctions. The workaround, dubbed INSTEX, is not yet operational as Iran has not completed its part of the scheme.

The bloc said it plans to push ahead with "the operationalization of the special purpose vehicle 'INSTEX'."

The EU has also introduced a so-called "blocking statute" protecting European companies from the effects of US sanctions, but many international corporations do more business in the United States than in Iran and have already severed ties there rather than risk running afoul of Washington.

READ MORE: US out, other parties reaffirm commitment to Iran nuke deal

In a message implicitly directed at the US administration, the EU powers said "we call on countries not party to the (deal) to refrain from taking any actions that impede the remaining parties' ability to fully perform their commitments."

Despite the heated rhetoric, the Europeans insist that only the International Atomic Energy Agency can judge whether Iran remains in compliance with the nuclear agreement. More than a dozen reports have shown that Tehran is respecting it so far. A new report is due at the end of May.