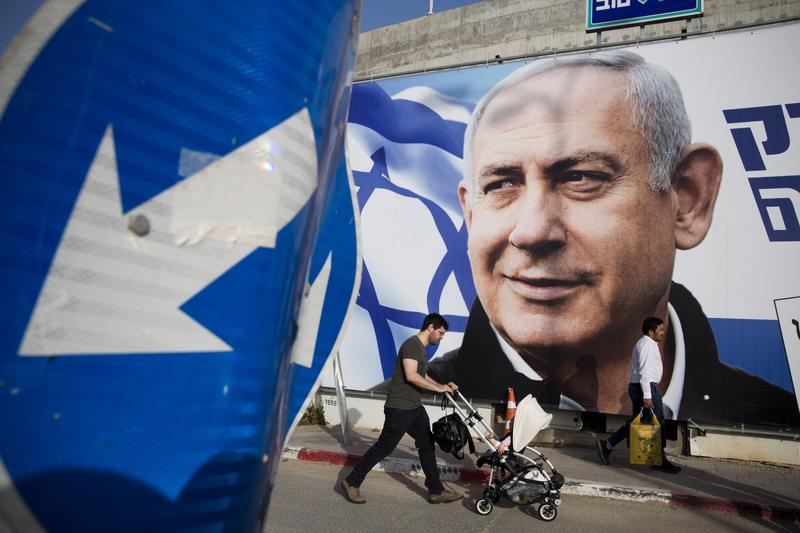 JERUSALEM — As Benjamin Netanyahu becomes Israel's longest-serving prime minister, he is solidifying his place as the country's greatest political survivor and the most dominant force in Israeli politics in his generation.

In contrast to his predecessors, Benjamin Netanyahu hasn't left his mark by winning a war or signing a peace accord. He has proudly resisted various peace initiatives and allowed West Bank settlements to flourish

He has persevered through scandals, crises and conflicts, winning election after election even as the country grows more bitterly polarized. His supporters credit him with keeping Israel safe and prosperous, maintaining its Jewish character and boosting its standing internationally.

His opponents, with equally visceral emotion, claim he has dashed hopes for peace with the Palestinians, torn society apart with vicious attacks on minority Arabs and left-wing opponents, and infused politics with a culture of corruption.

But as the longevity of his 13-year rule is set to surpass that of Israel's founding father David Ben-Gurion on July 20, all agree Netanyahu has left a permanent imprint on Israel.

"He thinks that he is the right guy in the right place. That he is the one who will save Israel and lead Israel to a safe haven," said Aviv Bushinsky, a former Netanyahu aide. Israelis think that "things are good, so why should we change a winning horse," he added.

Just as he is about to cross a milestone, Netanyahu faces perhaps his greatest political challenge yet. After failing to form a parliamentary majority following April elections, the country is holding a repeat vote on Sept 17. The following month, he faces a hearing with Israel's attorney general, who has recommended indicting Netanyahu on corruption charges. If formal charges are filed, Netanyahu could be forced to step aside. 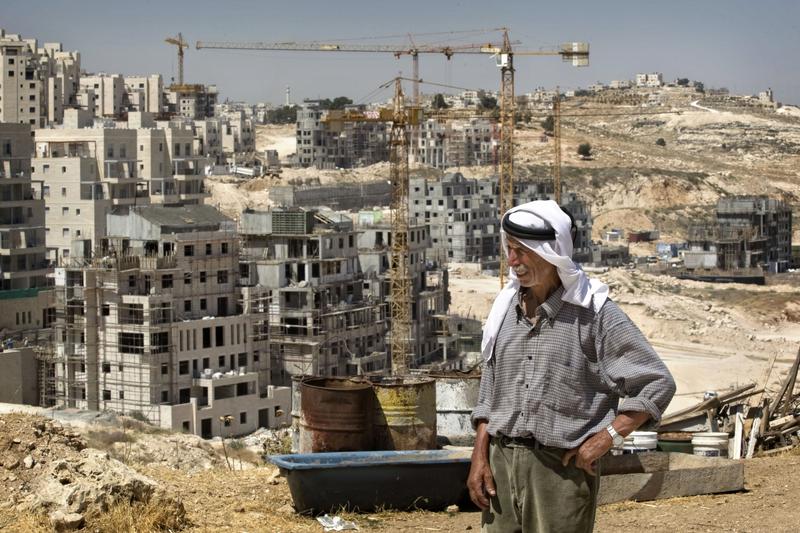 In this June 3, 2009 photo, Palestinian Said Eid stands next to his house, not seen, as construction continues on a new housing development in the Jewish neighborhood of Har Homa in east Jerusalem. (SEBASTIAN SCHEINER / AP)

In contrast to his predecessors, the 69-year-old hasn't left his mark by winning a war or signing a peace accord. He has proudly resisted various peace initiatives and allowed West Bank settlements to flourish. The signature achievements most associated with him, such as combatting Iran's nuclear program, covertly striking weapons shipments to Israel's enemies and building a border fence to stop the flow of African migrants, had begun taking shape before he assumed office.

"His rule has been characterized by conservatism and hesitancy," said opposition lawmaker Tamar Zandberg. "If he is going to be remembered for anything it's going to be his idleness."

Netanyahu has often said he would like to be remembered as the "protector of Israel." But admirers and critics alike say that what sets him apart is his unparalleled political acumen, a ruthless drive to win at all costs and an uncanny ability to sell his shifting policies to the public.

"He so deeply believes in himself and what he is doing, and his marketing skills are so amazing that he can argue for one thing and then the opposite with the same conviction. It's an art form," said Bushinsky.

A gifted orator in both English and Hebrew, he was elected for a single term in the late 1990s on a platform of opposing the Oslo accords with the Palestinians. But once in office, he continued implementing them and even met with arch-enemy Yasser Arafat.

As finance minister in the early 2000s, he cut taxes and rolled back entitlements to the ultra-Orthodox Jewish community — only to reverse course once he returned to power to secure their political backing. He wrote counterterrorism books in which he preached never to negotiate under threat, but as prime minister he released more than 1,000 prisoners in exchange for a single captive Israeli soldier in 2011. 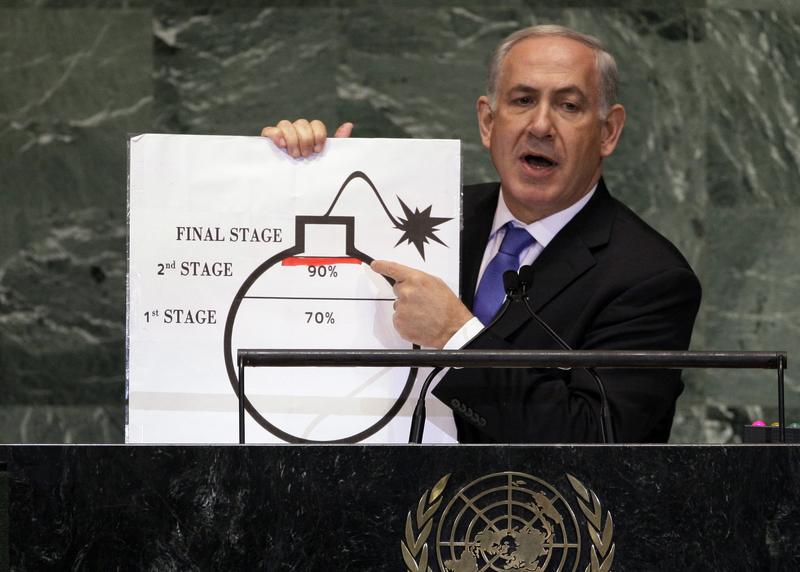 In this Sept 27, 2012 photo, Prime Minister Benjamin Netanyahu of Israel shows an illustration as he describes his concerns over Iran's nuclear ambitions during his address to the 67th session of the United Nations General Assembly at UN headquarters. (RICHARD DREW / AP)

Despite his tough talk, Netanyahu has shown relative moderation when it comes to using military force. Over the past year, he has resisted calls by hard-line constituents to strike harder against Gaza militants.

Even after so long in power, Netanyahu has maintained an outsider image, railing at perceived enemies in the media, judiciary and opposition. His tactics have mirrored those of his good friend, US President Donald Trump, as well as other right-wing populist leaders like Hungary's Viktor Orban and Brazil's Jair Bolsonaro — both of whom he has welcomed to Israel.

The anti-establishment rhetoric, along with occasional incitement against the country's Arab minority and the political left, has played well among his base of traditional, working-class voters.

The son of a historian — and a keen student of history himself — Netanyahu already holds the record for being Israel's youngest elected prime minister and for serving the longest consecutive term.

Anshel Pfeffer, a columnist at the Haaretz daily and author of a Netanyahu biography, called the prime minister an "incredibly good political strategist" who has presided over a period of prosperity and relative quiet. Netanyahu often boasts of expanding ties with countries that once shunned Israel — including Arab states that share Israel's enmity toward Iran — while rejecting demands for a Palestinian state.

"If you want one ideological legacy it's that he has broken the paradigm that we need to end the occupation or else we will be isolated," said Pfeffer. "He has proven that is not true."

Palestinian official Saeb Erekat said Netanyahu will be remembered as the one who "buried" the peace process and paved the way to a future apartheid state by deepening Israel's control over the West Bank, which it captured in the 1967 Mideast war. "I think his legacy will be his success in making sure that any ray of hope to achieve peace based on two states along the 1967 border is blocked," he said. 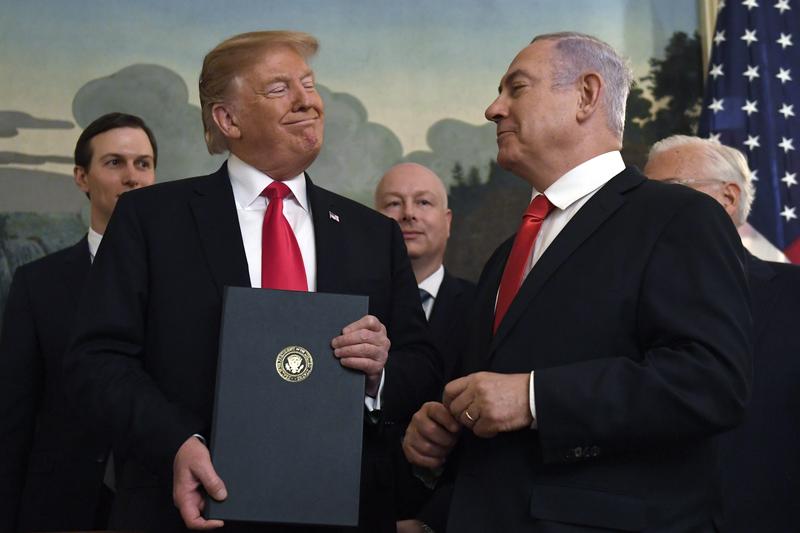 In this March 25, 2019 photo, US President Donald Trump smiles at Israeli Prime Minister Benjamin Netanyahu, right, after signing an official proclamation formally recognizing Israel's sovereignty over the Golan Heights, in the Diplomatic Reception Room at the White House in Washington. (SUSAN WALSH / AP)

In confronting former US President Barack Obama's nuclear deal with Iran in a brazen 2015 speech to Congress, Netanyahu also debunked the conventional wisdom that an Israeli leader could not survive an open clash with an American president. Since Trump's election in 2016, Netanyahu has enjoyed unprecedented backing, drawing frequent accusations of partisanship.

"The combination of a very difficult relationship with the Obama administration and the exaggerated embrace of Trump potentially create a rift in the quality of US-Israel relations," noted Dan Shapiro, Obama's former ambassador to Israel. "When the pendulum swings in the other direction that will also be part of his legacy."