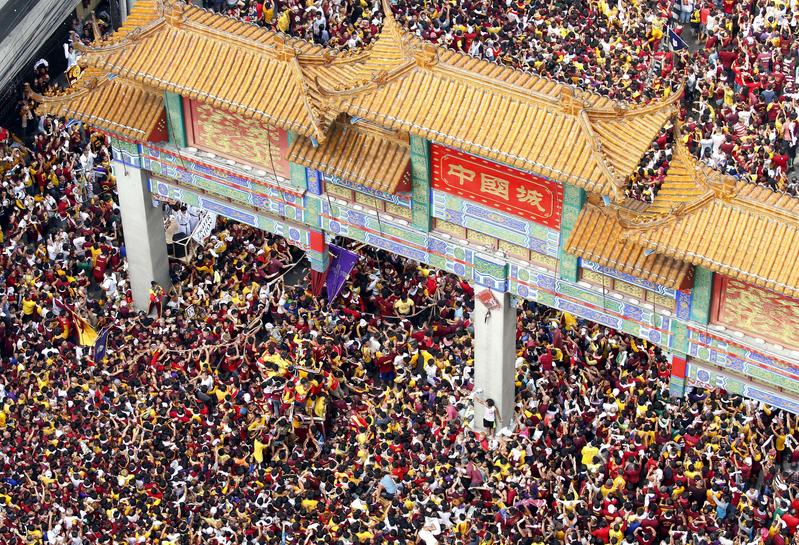 The procession of the Feast of the Black Nazarene, a popular religious festival in the Philippines, passes under the landmark arch of Binondo, Manila's Chinatown, during last year's celebration. (BULLIT MARQUEZ / AP)

"Chinatown is not something that you create. Chinatown only becomes a Chinatown because of the lives of the people there," said Teresita Ang See, founding president of Kaisa Para Sa Kaunlaran (Unity for Progress)

Besides his role as local guide to the late celebrity chef Anthony Bourdain, Man Dy is known for popularizing Binondo, Manila's Chinatown, as a tourist spot.

In 2005, Man Dy launched the Old Manila Walks tour agency, offering walking tours that showcased Binondo and in the process his own Chinese-Filipino heritage.

"The Chinese-Filipino community is an old community that's not always understood," he said.

He said he thinks there is no better way to understand and appreciate Chinese-Filipinos' heritage－and their contribution to Philippine society－than to visit Binondo.

Binondo district, in the southern part of Manila, the Philippine capital, has long been known as the center of Chinese-Filipino life.

Binondo is home to some of the country's oldest Chinese schools, the country's biggest Chinese-Filipino business association and a church dedicated to Chinese-Filipino Saint Lorenzo Ruiz. Its streets are lined with restaurants serving a fusion of Chinese and Filipino cuisine and stores selling festive red lanterns, joss papers, feng shui items and traditional Chinese medicinal treatments.

A Hokkien dialect spoken by people from Fujian province is also widely used around this area as most of the Chinese immigrants who came to the Philippines during the 18th and early 19th centuries were from that province.

"Chinatown is not something that you create. Chinatown only becomes a Chinatown because of the lives of the people there," said Teresita Ang See, founding president of Kaisa Para Sa Kaunlaran (Unity for Progress), a nonprofit organization that advocates for the proactive and sustainable participation of the Chinese-Filipino community in Philippine development.

See has extensively researched and written several papers on the Chinese-Filipino community. She calls Binondo, which is over 400 years old, the world's oldest Chinatown.

Chinese merchants have been sailing to the Philippines since the 10th century and bartered with ceramics, silk and beads for Philippine pearls, tortoise shells and hemp fabric.

Chinese-Philippine trading did not stop even with the advent of the Spanish colonial era. In the 16th century, the Spaniards designated a settlement for Chinese immigrants.

Situated near the then administrative center of Intramuros, it was in Binondo where Chinese immigrants plied their trade, intermarried with indigenous Filipinos, had children and eventually formed what is now known as the Tsinoy community.

Tsinoy is shorthand for Tsinong Pilipino, Chinese-Filipino in the Tagalog language.

Man Dy explained that Tsinoy culture is the product of the intertwining of Chinese, Filipino and Spanish cultures. This character distinguishes Binondo from other Chinatowns around the world.

The people of the Tsinoy community are also known for their entrepreneurial drive. Hence, Binondo emerged as the country's premier trading hub during the colonial era.

"Early Chinese immigrants confined themselves to Binondo because of language fluency. Because it's easy to buy and sell－communicate with each other－when you share the same language, so you flock to that," See said.

But it is not only in the Philippines that Binondo made its mark. See said Binondo was also once a global center of trade and commerce and even helped China to connect to the rest of the world.

"The Europeans' knowledge of China came from the Philippines," she said, noting that Chinese products were shipped to Europe from the 16th to 19th centuries through Binondo.

In the postwar era, the new business district of Makati overtook Binondo as the country's key trade and finance center. Still, Binondo has never shed its commercial past.

The headquarters of the Federation of Filipino-Chinese Chambers of Commerce and Industry Inc, the country's biggest organization of Chinese-Filipino businesses, remains in Binondo. It counts among its members some of the country's top industrialists, a reflection of the community's contribution to the Philippine economy.