Trump says sees possibility of US-Japan trade deal by May 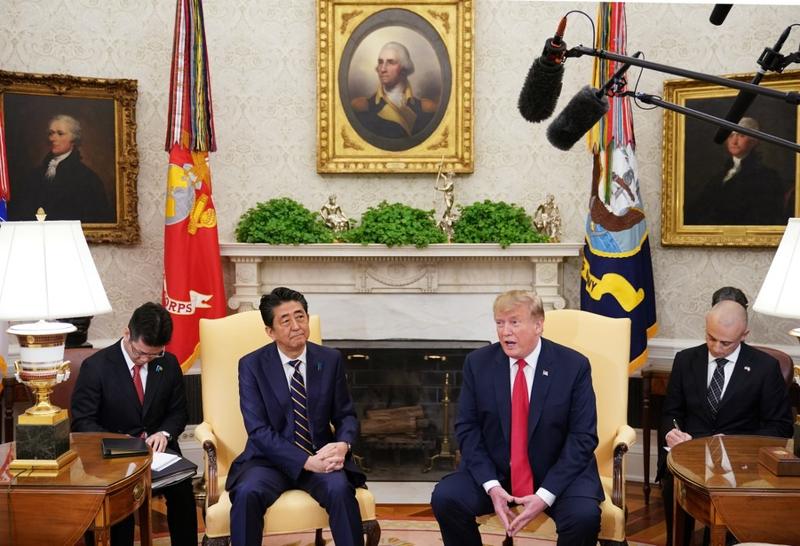 WASHINGTON – President Donald Trump said on Friday it is possible that the United States and Japan could reach a new bilateral trade deal by the time he visits Tokyo in May, but he and Japanese Prime Minister Shinzo Abe cited areas where they differ on trade.

Trump and Abe held one-on-one talks in the Oval Office prior to a White House dinner to celebrate the birthday of Trump's wife, Melania. While making progress in negotiations with China on a new trade deal, Trump made clear he wants to seal a new agreement with Japan soon as well.

Abe's visit, which is to include a round of golf on Saturday with Trump, is to set the stage for a trip to Japan that Trump is taking in late May to celebrate Crown Prince Naruhito's becoming the new emperor of Japan.

I think it (trade deal) can go fairly quickly. Maybe by the time I'm over there. Maybe we sign it over there. But it's moving along very nicely and we'll see what happens.

Trump announced that he and Abe may take in a sumo wrestling match during the trip to Tokyo.

Naruhito is set to become Japan's emperor on May 1. He will assume the throne after his father, Emperor Akihito, abdicates on April 30.

Trump said negotiators for the United States and Japan are making progress in his drive to rebalance their trade relationship in a way that reduces chronic US trade deficits with Japan.

"I think it can go fairly quickly. Maybe by the time I'm over there. Maybe we sign it over there. But it's moving along very nicely and we'll see what happens," Trump said about the trade deal.

READ MORE: Japan resists US pressure on FX ahead of Abe-Trump summit

A senior Japanese government official told Reuters after the Oval Office discussions that "based upon the trust between the two countries," the two leaders "agreed to accelerate the discussions in order to achieve an early result on Japan-US trade talks."

Still, areas of tension surfaced during their session with the news media. Trump cited Japanese tariffs on American agricultural products as an irritant, and Abe brought up US tariffs on Japanese autos.

"We'll be discussing very strongly agriculture because, as the prime minister knows, Japan puts very massive tariffs on our agriculture...and we want to get rid of those tariffs," Trump said.

Trump has made clear he is unhappy with Japan's trade surplus with the US – much of it from auto exports – and wants a two-way deal to change it.

Abe pointed out that while Japan has no tariffs on American autos, "the United States has put on 2.5 percent tariffs on Japanese autos," and said he would like to proceed toward a "mutually beneficial outcome" in the trade talks.

Trump said he felt it was possible to work out a long-term trade deal with Japan.

"We are trying to bring some balance to the surplus that they have with the United States for many, many years, but it'll all work out," he said. 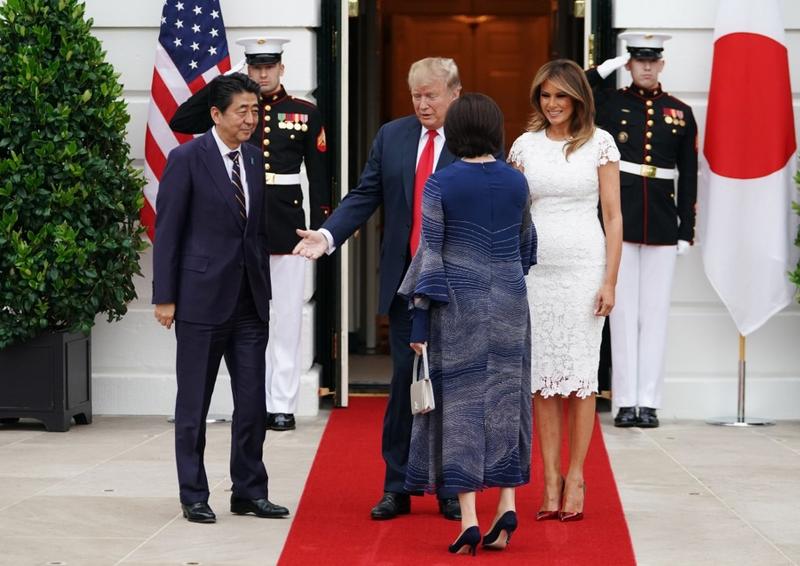 US President Donald Trump and First Lady Melania Trump greet Japan's Prime Minister Shinzo Abe and his wife Akie Abe at the South Portico of the White House as they arrive for dinner in Washington, DC, April 26, 2019. (MANDEL NGAN / AFP)

The senior Japanese government official said the two leaders agreed that the governments would coordinate closely with each other and with the Republic of Korea (ROK) to achieve the denuclearization of the Democratic People’s Republic of Korea (DPRK). He said Abe thanked Trump for twice raising the issue of Japanese abductees held in the DPRK during his February summit with DPRK leader Kim Jong-un.

The official said Abe and Trump also agreed to enhance the "deterrence and capabilities" of the US-Japan alliance and reaffirmed their intention to cooperate further to ensure a "free and open Indo-Pacific" region.

Looking ahead to the June 28-29 Group of 20 meeting in Osaka, the two agreed to seek a summit agreement on key issues, including trade, the digital economy, the issue of maritime plastic waste, infrastructure investment, and women’s empowerment, said the official, who did not want to be otherwise identified.

In the Oval Office, Trump joked that when Abe originally invited him to Tokyo as the first official guest after the new emperor takes over, he was not sure he could attend.

"I said, 'Gee I don't know if I can make it. Let me ask you a question. How big is that event compared to the Super Bowl, for the Japanese? And the prime minister said, It's about 100 times bigger. I said, I'll be there, if that's the case, I'll be there," Trump said.

Abe said Japan will enter a new era, to be called Reiwa, on May 1 when the Japanese crown prince accedes to the throne. He said Trump and the first lady would be the first state guests of the new era.

"This state visit will show both inside and outside that still under the new era, Reiwa, the bonds between Japan and the United States under our alliance will remain unwavering. And also we will demonstrate our strong commitment to addressing various challenges that we see in the international community," Abe said through a translator.