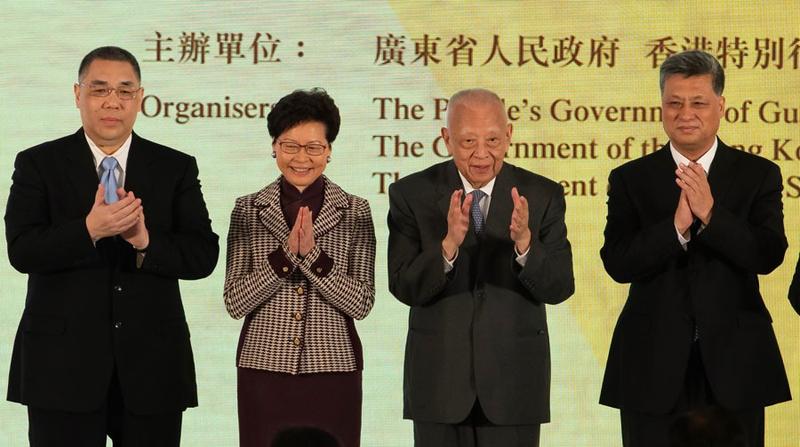 Chief Executive Carrie Lam Cheng Yuet-ngor said on Thursday that Hong Kong would place its future development focus on consolidating the city's status as the financial and aviation hub, and turning the city into a world-class innovation and technology center, after the release of the Outline Development Plan for the Guangdong-Hong Kong-Macao Greater Bay Area.

She said the government would also intensify efforts in helping young people find career opportunities within the Greater Bay Area, as well as enhance the connectivity inside the area.

Lam made the remarks at the Symposium on the Outline Development Plan for the Bay Area held in Hong Kong. The symposium, held to discuss the plan released on Monday, was co-organized by the governments of Guangdong province, HKSAR and Macao SAR.

She said Hong Kong has expanded its role as a connector to an active player in the Greater Bay Area development. She added the city's expanding role would ultimately benefit all its residents, especially the young generation.

Lam stressed that Hong Kong's participation in the Greater Bay Area would not compromise the principle of "one country, two systems".

Lin Nianxiu, deputy director of the National Development and Reform Commission, who also attended the symposium, echoed Lam. He said the development of the Greater Bay Area should strictly adhere to "one country, two systems" principle and act in accordance with the law.

The development plan, unveiled on Monday, aims to turn the 11-city cluster in the area into a globally influential innovation and technology hub and an important support pillar for the Belt and Road Initiative.

Around 300 guests, including Ma Xingrui, governor of Guangdong, and Fernando Chui Sai-on, chief executive of Macao SAR, attended the symposium.