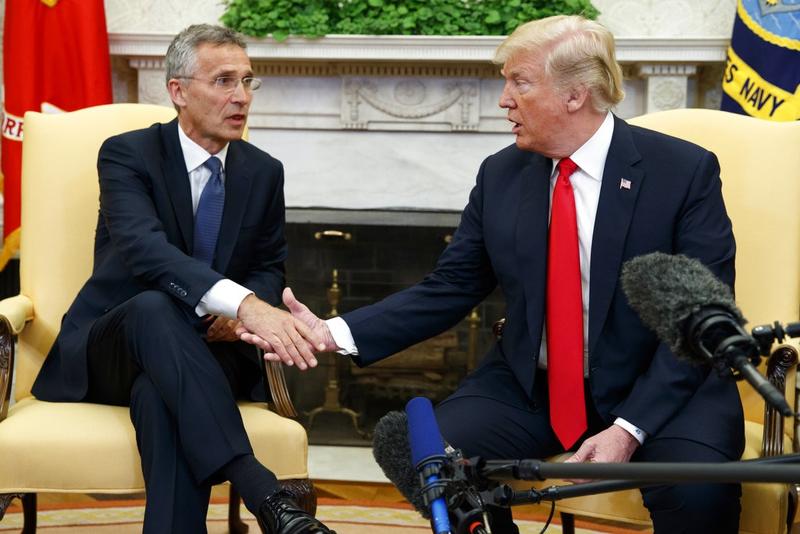 In this May 17, 2018 file photo, US President Donald Trump meets with NATO Secretary-General Jens Stoltenberg in the Oval Office of the White House in Washington. (EVAN VUCCI / AP)

WASHINGTON — With the established global order on shaky footing, US President Donald Trump's weeklong trip to Europe will test already strained bonds with some of the United States' closest allies, then put him face to face with the leader of the country whose electoral interference was meant to help put him in office.

Trump departs Tuesday on a four-nation tour amid simmering disputes over trade and military spending with fellow Western democracies and speculation about whether he will rebuke or embrace Russian President Vladimir Putin. He meets the Russian leader in Helsinki as the finale of a trip with earlier stops in Belgium, England and Scotland.

If Trump is warmer toward Putin than the leaders of the military alliance that was founded to protect Europe from Soviet threats, it would go a long way to undermining NATO, undermining the trans-Atlantic relationship, undermining our relationship with our allies

Trump has shown little regard for America's traditional bonds with the Old World, publicly upbraiding world leaders at NATO's new headquarters a year ago for not spending enough on defense and delivering searing indictments of Western trading partners last month at an international summit in Canada. On this trip, after meeting with NATO leaders in Brussels, he'll travel to the United Kingdom, where widespread protests are expected, before he heads to one of his Scottish golf resorts for the weekend.

In the run-up to his trip, the president did little to ease European concerns by delivering fresh broadsides against NATO, an intergovernmental military alliance of 29 North American and European countries aimed at countering possible Russian aggression.

"I'll tell NATO: 'You've got to start paying your bills,'" Trump pledged at a rally last week in Montana in which he bemoaned that Americans were "the schmucks that are paying for the whole thing."

He then laced into German Chancellor Angela Merkel, who will be in attendance in Brussels, complaining about how much the United States put toward Germany's defense: "And I said, you know, Angela, I can't guarantee it, but we're protecting you, and it means a lot more to you. ... I don't know how much protection we get from protecting you."

At the same time, he declared that "Putin is fine" and that he had been preparing for their summit "all my life."

Experts fear the trip could produce a repeat of the dynamics from Trump's last trip abroad, when he admonished Group of Seven allied nations at a summit in Canada before heading to Singapore, where he showered praise on one of America's longest-standing adversaries, the Democratic People's Republic of Korea's Kim Jong-un.

"What people are worried about this trip is he'll have equally difficult interactions with his NATO counterparts," including Merkel and Canadian Prime Minister Justin Trudeau, said James Goldgeier, a visiting senior fellow at the Council on Foreign Relations and professor at American University, who is an expert in NATO and security alliances.

"The main concern is he will spend much of the time berating them on not spending enough on defense" before having "a love fest with Putin, like he did with Chairman Kim," Goldgeier said. He added that if Trump is warmer toward Putin than the leaders of the military alliance that was founded to protect Europe from Soviet threats, it would go "a long way to undermining NATO, undermining the trans-Atlantic relationship, undermining our relationship with our allies."

Trump is expected to continue to press NATO nations to fulfill their commitments to spend 2 percent of their gross domestic product on defense by 2024. Trump has argued that countries not paying their fair share are freeloading off the US and has threatened to stop protecting those he feels pay too little.

NATO estimates that 15 members, or just over half, will meet the benchmark by 2024 based on current trends. Trump sent letters to the leaders of several NATO countries ahead of his visit, warning that it would become "increasingly difficult to justify to American citizens why some countries fail to meet our shared collective security commitments."

The ties between the US and many of its longest-standing allies have frayed since Trump took office and put his "America first" agenda into practice. He has pulled the US out of the Paris climate agreement as well as the Iran nuclear deal, slapped tariffs on steel and aluminum imports, and threatened additional tariffs on products like automobiles. 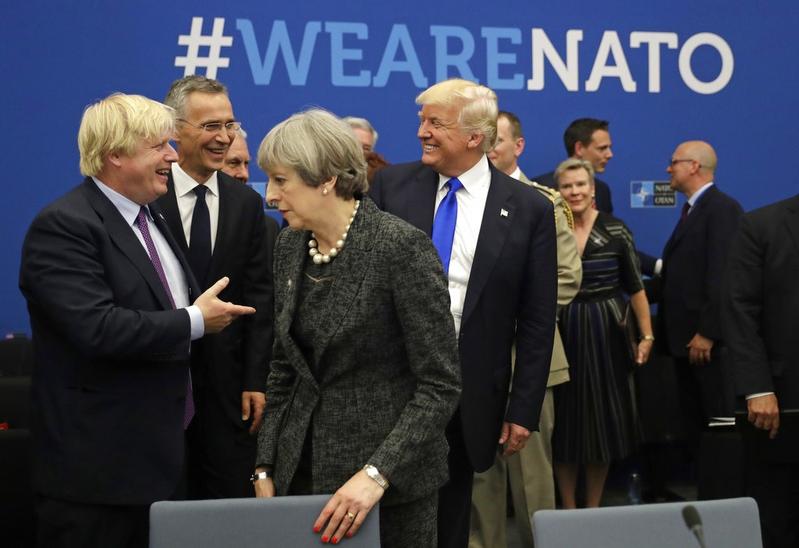 In this May 25, 2017 file photo, US President Donald Trump (center) jokes with British Foreign Minister Boris Johnson (left) as British Prime Minister Theresa May (third left) walks past during a working dinner meeting at the NATO headquarter,s during a NATO summit of heads of state and government in Brussels. (MATT DUNHAM / AP)

Although administration officials point to the long-standing alliance between the United States and the United Kingdom, Trump's itinerary will largely keep him out of central London, where significant protests are expected. Instead, a series of events — a black-tie dinner with business leaders, a meeting with Prime Minister Theresa May and an audience with Queen Elizabeth II — will happen outside the bustling city, where Mayor Sadiq Khan has been in a verbal battle with Trump.

Woody Johnson, Trump's ambassador to the UK, said the president is aware of the planned protests but insisted that Trump "appreciates free speech" in both countries.

The G-7 world leaders' meeting in Canada last month ended in tumult when Trump suddenly retracted his endorsement of the group's final joint statement after his departure and railed against Trudeau by midflight tweet en route to Singapore for his summit with Kim, a meeting that critics said legitimized Kim on the world stage without securing a clear pathway to the denuclearization.

"The president was willing to offer concessions to Kim without getting anything specific or concrete in return," said Jeffrey Rathke, deputy director of the Europe Program at the nonpartisan Center for Strategic and International Studies.

He said the decision had sparked "kind of a frenzy" about what concessions Trump might be willing to offer Putin without NATO signoff.

On Putin's wish list: an end to US military exercises in Europe and the scaling back of US forces there. The summit also will offer Putin a chance to try to persuade Trump to lift some of the sanctions imposed on Russia over its 2014 annexation of Crimea, its support for separatists fighting the government in eastern Ukraine and its alleged meddling in the 2016 US presidential election.

Trump has already met with Putin twice as president, including a meeting on the sidelines of a summit in Germany that stretched for more than two hours. But plans for a full-fledged summit had been delayed amid the FBI and congressional probes into whether Trump campaign aides coordinated with Russia to help Trump win the election. Trump has dismissed those probes as nothing but a "witch hunt."

Saying that he wants to improve relations with Moscow, Trump has repeatedly cast doubt on conclusions by the nation's intelligence agencies that Russia tried to help him win the 2016 election, noting that Putin has "strongly" denied being behind the interference. US officials said the two sides this time would be discussing Russian election meddling, Russia's incursions in the Ukraine and involvement in Syria.