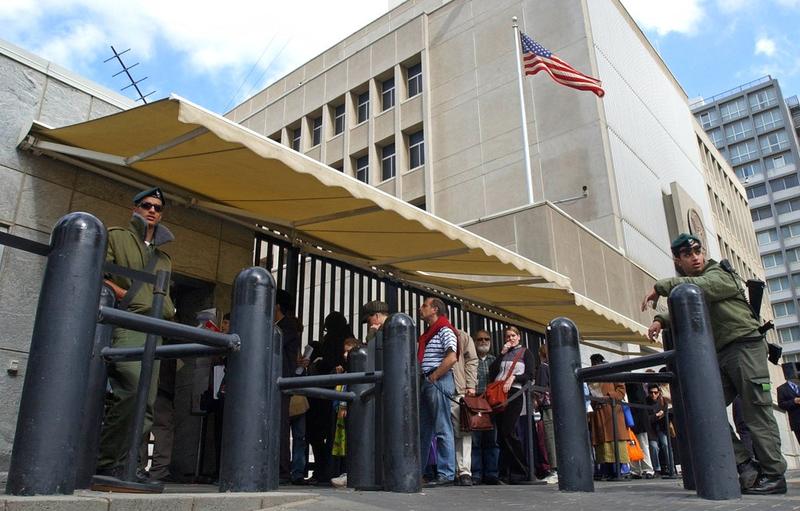 In this March 17, 2003 file photo, an Israeli border policemen guards the US Embassy in Tel Aviv as other Israelis line up for US visas. (EITAN HESS-ASHKENAZI / AP)

WASHINGTON/RAMALLAH/ANKARA - The possibility that US President Donald Trump may recognize Jerusalem as Israel's capital has stirred opposition from US and foreign officials who fear it could unleash violence.

Such a decision, which US officials have said has not been finalized, would violate decades of US policy not to take a stance on the fate of Jerusalem on the grounds that this was an issue Israelis and Palestinians should negotiate and decide.

If Trump made such a move, it could spark demonstrations or violence by Palestinians or by Muslims around the world, in part because of the sensitivity of the Jerusalem site known to Jews as the Temple Mount and to Muslims as Haram al-Sharif.

The site includes the al Aqsa Mosque, the third-holiest site in Islam, and the golden Dome of the Rock. It was also the site of an ancient Jewish temple, the holiest place in Judaism.

If Trump made such a move, it could spark demonstrations or violence by Palestinians or by Muslims around the world

Israel seized East Jerusalem, which includes the area, during a 1967 war. However, the Waqf, a Muslim religious body, manages the Islamic sites within the compound.

A senior US official told Reuters last week that Trump was likely to make the announcement on Jerusalem's being Israel's capital on Wednesday, though his adviser and son-in-law Jared Kushner on Sunday said no final decision had been made.

The White House said it would not take any action on Monday on whether to move the US embassy to Jerusalem from Tel Aviv, something that Trump had promised to do in his presidential campaign.

Trump is expected to sign the waiver, according to several US officials. One US official said Trump was likely to accompany the signing with an order for his aides to begin serious planning for an eventual embassy move, though it was unclear whether he would establish a strict timetable.

Two other US officials said on condition of anonymity that news of the plan to recognize Jerusalem as Israel's capital had kicked up resistance from the State Department's Near Eastern Affairs bureau (NEA), which deals with the region. 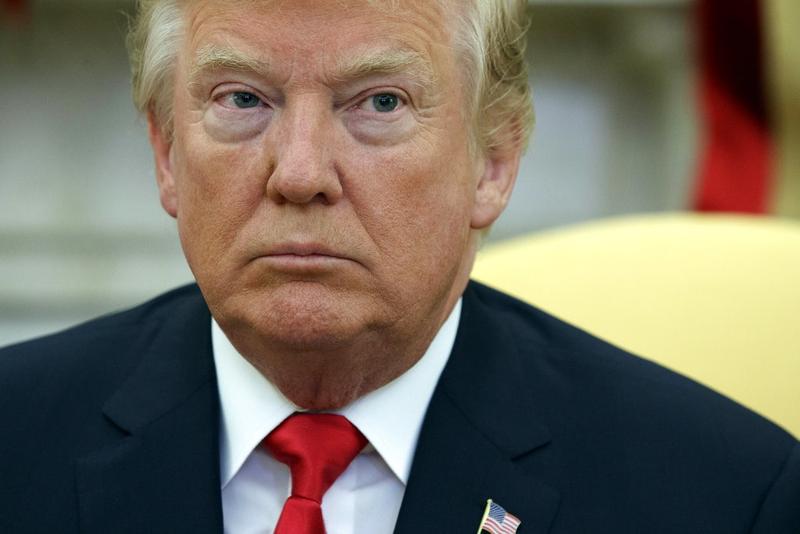 In this Nov 30, 2017 photo, President Donald Trump listens during a meeting with Bahrain's Crown Prince Salman bin Hamad Al Khalifa in the Oval Office of the White House in Washington. (EVAN VUCCI / AP)

"Senior (officials) in NEA and a number of ambassadors from the region expressed their deep concern about doing this," said one official, saying that the concerns focused on "security."

The State Department referred questions to the White House. The White House did not immediately respond to requests for comment about the concerns of US and foreign officials about the possibility of recognizing Jerusalem as Israel's capital.

A fourth US official said the consensus US intelligence estimate on US recognition of Jerusalem as Israel's capital was that it would risk triggering a backlash against Israel, and also potentially against US interests in the Middle East.

The core issues in the Israeli-Palestinian dispute include borders, the future of Jewish settlements in the West Bank, the fate of Palestinian refugees and the status of Jerusalem.

The Palestinians seek to establish an independent state in the Israeli-occupied West Bank, territory captured in the 1967 Middle East war and the Gaza Strip, which is controlled by Islamist Hamas, with East Jerusalem as its capital.

US allies voiced their misgivings about the United States unilaterally calling Jerusalem Israel's capital. "Any US announcement on the status of Jerusalem prior to a final settlement would have a detrimental impact on the peace process and would heighten tensions in the region," Prince Khalid bin Salman, Saudi Arabia's ambassador to the United States, said in a statement.

French President Emmanuel Macron "expressed his concern over the possibility that the United States would unilaterally recognize Jerusalem as the capital of Israel" during a phone call with Trump on Monday, Macron's office said after the two leaders spoke by telephone.

And in an unusually detailed statement published by Jordan's official news agency Petra, Jordanian Foreign Minister Ayman Safadi was quoted as having warned US Secretary of State Rex Tillerson against the move in a call on Sunday.

Safadi said such a move would "trigger anger across the Arab and Muslim world, fuel tension and jeopardize peace efforts," Petra reported.

The Palestine Liberation Organization's chief representative in Washington, Husam Zomlot, said a formal US recognition of Jerusalem as the capital of Israel would be the "kiss of death" to the two-state solution to the Israeli-Palestinian conflict.

"Should such a step be taken it would have catastrophic consequences," Zomlot told Reuters.

A fifth US official said concerns of Palestinian and other Arab leaders about endorsing Israel's claim to Jerusalem were being taken into account but no final decisions had been made.

Daniel Benjamin, a former US counterterrorism official now at Dartmouth University, had a simple message: "This is playing with fire."

A Palestinian senior official called on the United States Monday to avoid taking any move that would affect the status quo of Jerusalem.

Both moving the US embassy to Jerusalem and the US recognition of Jerusalem as Israel's capital would be unacceptable and would entail risks, said Palestinian Deputy Prime Minister Ziad Abu Amr during his meeting with US Consul General in Jerusalem.

The move would be "offensive and contrary to the role of the US administration as a mediator and a sponsor of the peace process," said the Palestinian official.

"It will disqualify the United States from playing a role in the peace process and will close every door to a serious negotiation, as well as will push the entire region into more tension and instability," he added.

The Palestinian leadership would have to break up any previous understandings it had achieved with the United States, should the US administration decided to change its stance on Jerusalem, warned Amr.

The US administration would also be held responsible for any possible consequences of its moves on Jerusalem, he said.

He further urged the United States to reconsider its position and to preserve the "remaining chances" of achieving peace between the Palestinians and Israel.

A possible move by the US to recognize Jerusalem as Israeli capital would be a "disaster" for the region, Turkish government spokesperson Bekir Bozdag said Monday.

"If the status of Jerusalem is changed and another step is taken, a catastrophe will come up," Bekir Bozdag said during a press conference following cabinet meeting.
Neither Israelis nor Palestinians nor others would benefit from such a move, Bozdag said, "It would completely abolish the fragile peace process in the region, and lead to new conflicts, new disputes and new unrest."
Turkish President Recep Tayyip Erdogan had a phone conversation with his Palestinian counterpart Mahmoud Abbas over the issue, Bozdag stated but without more detail.
During Abass's visit to Turkey in August, Erdogan showed strong support to Palestine, urging the Israeli government to end its "occupation attempts" of Palestine that threaten the possibility of a two-state solution to the Israeli-Palestinian conflict.
Erdogan also vowed that Ankara would continue its efforts for the recognition of Palestine in all international platforms.