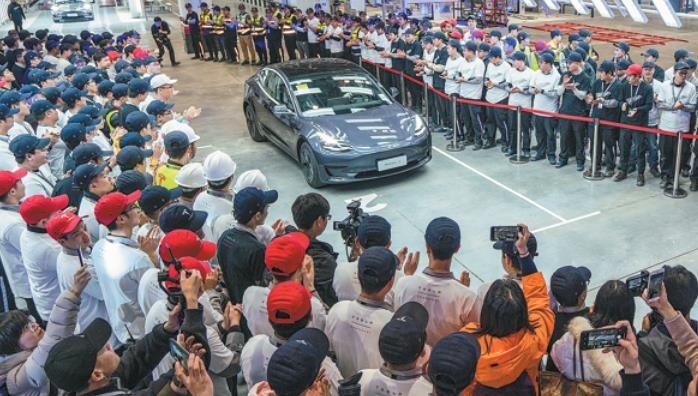 Fifteen electric sedans ordered by employees of the new Tesla factory in Shanghai were delivered at a ceremony on Dec 30, 2019. (PHOTO PROVIDED TO CHINA DAILY)

US electric carmaker Tesla Inc started deliveries of Shanghai-made vehicles in China on Monday, which are expected to facilitate its foray into the world's largest new energy vehicle market.

Fifteen Model 3 sedans were delivered to its employees at the US$2 billion Shanghai plant, Tesla's first overseas factory, ahead of schedule in the first quarter of 2020.

The Shanghai plant has already achieved its production target of 1,000 units a week and orders for the China-made sedan have been "very good" so far, Wang Hao, a senior executive at Tesla China, said

Wang Hao, a senior executive at Tesla China, said the plant has already achieved its production target of 1,000 units a week and that orders for the China-made sedan have been "very good" so far. Tesla will ramp up deliveries in January, he said.

The plant, which broke ground in January 2019 and started trial production in October－record speed for global carmakers in China－was hailed by CEO Elon Musk as a "template for future growth".

Tesla's Shanghai factory is China's first wholly foreign-owned car plant, showing the country's effort to open up its automotive market, which has been the world's largest since 2009.

Tesla has been bullish about the Chinese market.

Its China sales revenue surged 64 percent to US$669 million in the third quarter this year, while the figure in the United States fell 39 percent to US$3.13 billion, according to its financial statement.

"China is by far the largest market for mid-sized premium sedans. With Model 3 priced on par with gasoline powered mid-sized sedans, we believe China could become the biggest market for Model 3," the carmaker's financial statement reads.

As its China models roll off the assembly line, Tesla said it will double the number of service centers and fast charging stations in China next year, and it plans to more than double its after-sales workforce from about 600 now to 1,500.

He said Tesla, as well as leading local startups Nio and Xpeng, will help bolster the image of electric cars for potential buyers.

"They have tiny sales compared with gasoline car makers, and it is not time that they take each other on," Zeng said.

Carmakers in China sold 1.04 million electric cars and plug-in hybrids in the first 11 months of the year, accounting for 4.5 percent of all vehicles sold in the country, according to the China Association of Automobile Manufacturers.

Wang Bin, a senior official at the Ministry of Commerce, said at a briefing on Monday that China will continue to drive the change from conventional vehicles to electric cars and plug-in hybrid ones and facilitate their use.