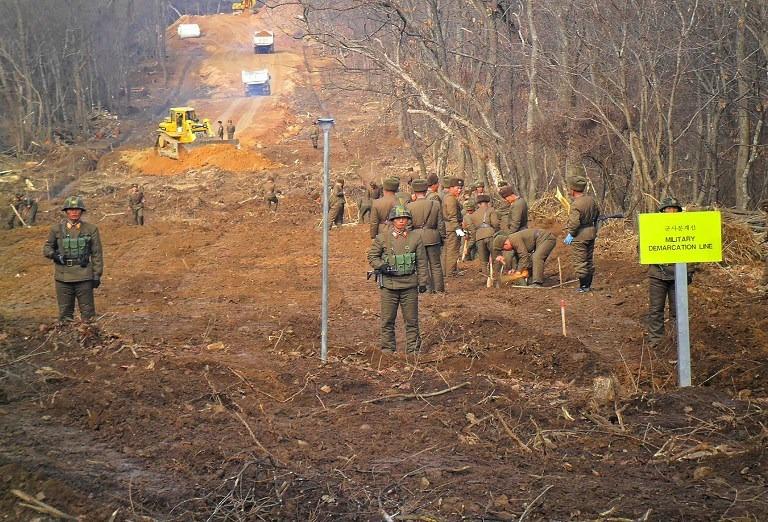 This handout taken on an unconfirmed date and released by the Defence Ministry of ROK on Nov 22, 2018 shows soldiers of DPRK working near the Military Demarcation Line (yellow signboard) during a recent operation to construct a tactical road to support a joint war remains recovery project in the Demilitarized Zone (DMZ) dividing the two Koreas in Cheorwon. (PHOTO / AFP)

SEOUL — The defense ministry of Republic of Korea (ROK) said Monday that the military independently launched the excavation works for the remains of soldiers killed during the 1950-53 Korean War in areas bordering the Democratic People's Republic of Korea (DPRK).

The DPRK had yet to respond to the agreed-upon excavation works, according to the Seoul ministry

The militaries of the ROK and the DPRK originally planned to jointly start the excavation of the war remains in the Arrowhead Ridge inside the eastern part of the demilitarized zone (DMZ) from April 1 on a trial basis.

However, the DPRK had yet to respond to the agreed-upon excavation works, according to the Seoul ministry.

The joint excavation was agreed upon through the Sept 19 military agreement, which was signed by defense chiefs of the two Koreas during the third summit between President of ROK Moon Jae-in and top DPRK leader Kim Jong-un in Pyongyang last September.

It was part of the inter-Korean peace-building efforts inside the DMZ, which has divided the Korean Peninsula since the Korean War ended with an armistice, not a peace treaty.

The side of ROK independently sent about 100 personnel for the excavation works, which would initially focus on spadework and the additional demining in the heavily armed border area.

ROK offered in mid-March to the DPRK holding a general-grade dialogue to discuss the implementation of the military agreement, but Pyongyang has yet to reply.