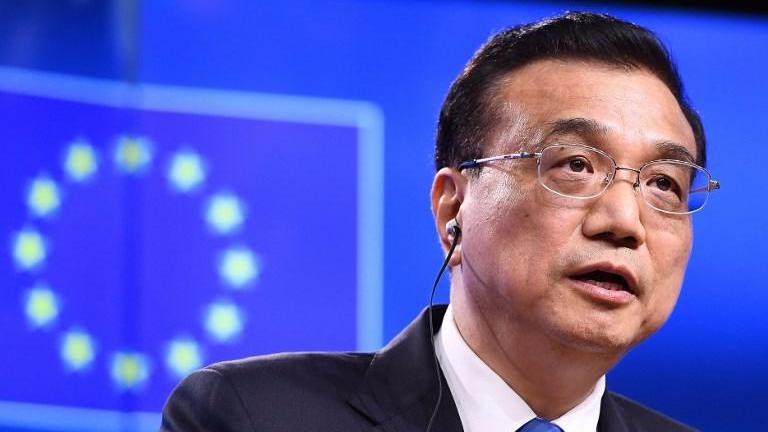 In thi June 2, 2017, photo, Chinese Prime Minister Li Keqiang gestures as he addresses a press conference at the end of an EU-China summit at the European Council in Brussels. (EMMANUEL DUNAND / AFP)

China and France, both major economies and permanent members of the United Nations Security Council, should work together for the stability, development and prosperity of the world, Premier Li Keqiang said when meeting French Minister for Europe and Foreign Affairs Jean-Yves Le Drian in Beijing on Friday.

China hopes to promote all-around and pragmatic cooperation with France, so that people of both countries will better benefit from the development of bilateral ties

France is an important country in the European Union, Li said, adding that the significance of China-France ties go beyond the scope of the two countries and have an influence on the world.

Bilateral cooperation is developing steadily in various fields, and the cooperation in nuclear power has continued successfully for 30 years, the premier said.

There is great potential for the two countries to develop in a mutually beneficial way, and China hopes to promote all-around and pragmatic cooperation with France, so that people of both countries will better benefit from the development of bilateral ties, Li added.

France and China are both in favor of multilateralism, and they support the settlement of differences through political means, Le Drian said, adding that his country hopes to strengthen strategic communication and pragmatic cooperation with China.

This is the fourth trip Le Drian has made to China since he became the French foreign minister. He met State Councilor and Foreign Minister Wang Yi on Thursday.

Le Drian told Wang that France hopes to work with China to implement the outcomes of French President Emmanuel Macron's visit to China in January as well as to inject new impetus in international multilateral systems, according to a Foreign Ministry statement.

In a joint news conference on Thursday, Wang said he and Le Drian agreed that the two countries should comprehensively implement the consensus their leaders have reached and maintain the strong momentum of the development of bilateral ties.

The two also agreed that their countries should strengthen strategic communication and collaboration in a time of mounting unilateralism and protectionism, Wang said.