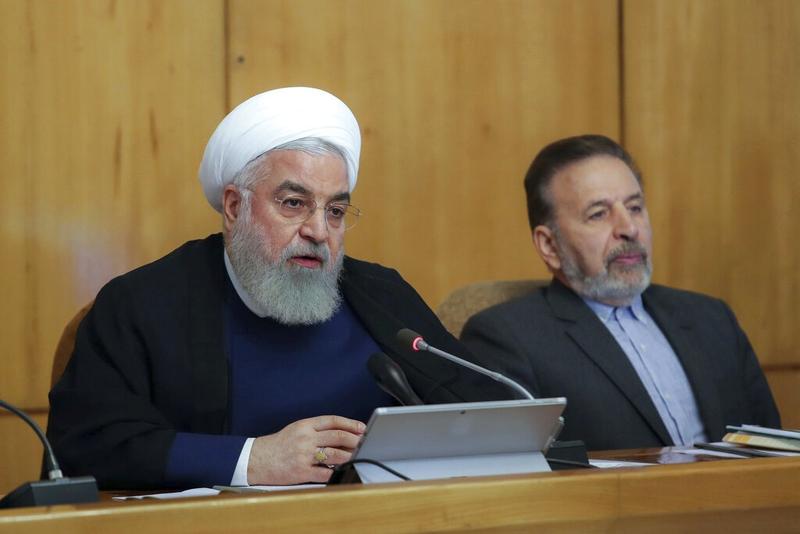 In this photo released by the office of the Iranian Presidency, President Hassan Rouhani speaks in a cabinet meeting in Tehran, Iran, July 24, 2019. (IRANIAN PRESIDENCY OFFICE VIA AP)

His remarks could create an opening to reduce tensions as Boris Johnson becomes prime minister. It's unclear how the new government will respond to Rouhani's suggestion or the impasse with Iran.

Should they be committed to international frameworks and give up their wrong actions, including what they did in Gibraltar, they will receive a proportional response from Iran

"We do not seek the continuation of tension with some European countries," Rouhani said in comments carried on his website. "Should they be committed to international frameworks and give up their wrong actions, including what they did in Gibraltar, they will receive a proportional response from Iran."

Britain this week announced plans to develop and deploy a Europe-led "maritime protection mission" to safeguard shipping in the area after Iran's Revolutionary Guard seized the Stena Impero in the Strait of Hormuz on Friday.

Rouhani said that while Iran does not seek a military conflict, it will not allow threats to its security in the important waterway. He described the Iranian seizure of the ship as "professional and brave."

Iranian officials have alleged the ship was seized after it violated international maritime law by turning off its signaling for longer than is allowed and passing through the wrong channels.

However, Iranian officials have also suggested the ship was seized in response to Britain's role in impounding an Iranian supertanker two weeks earlier off the coast of Gibraltar, a British overseas territory. The UK says the tanker was suspected of violating sanctions on oil shipments to Syria.

Both sides have called the interception of one another's ships "hostile acts" and "piracy."

Stena Bulk, the owner of the ship being held by Iran, said it made first contact Tuesday evening with the crew of 23 since its seizure five days ago. The company said the ship's master advised "that everyone was safe with good cooperation with the Iranian personnel onboard."

The crew are mostly Indian, but also include Filipino, Russian and Latvian nationals. Iranian state TV aired video of the crew onboard the vessel off Iran's port of Bandar Abbas earlier this week.