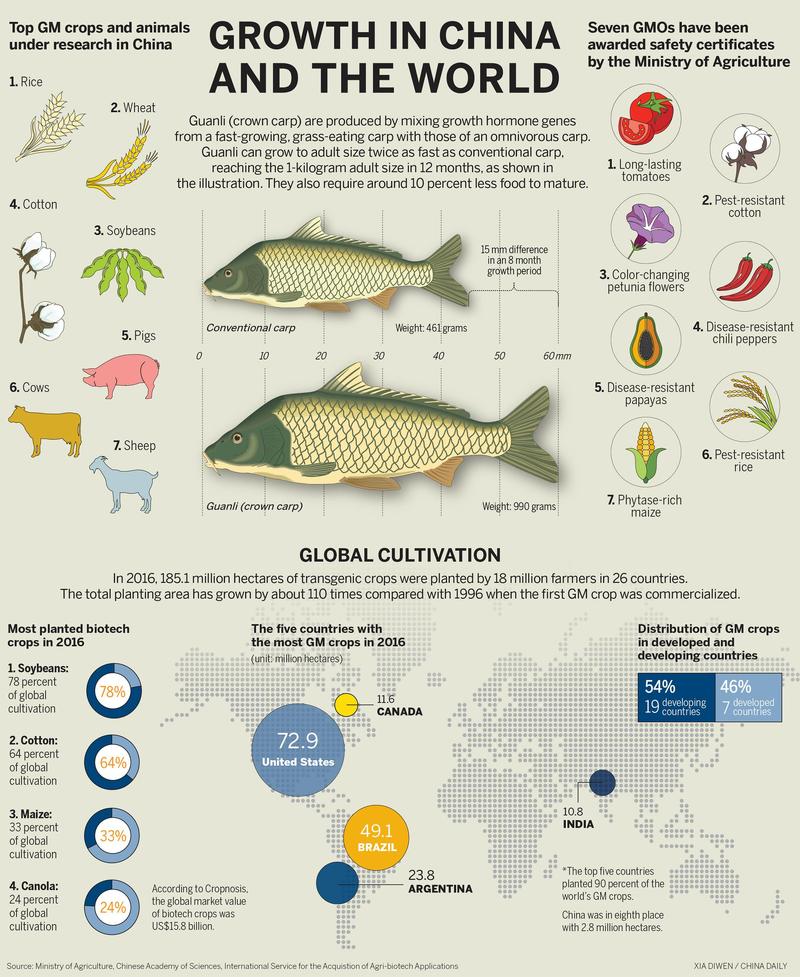 While giant genetically modified Chinese carp may leap onto the nation's dinner tables in about two years, scientists are urging that the promotion of GM fish should be conducted slowly and meticulously to avoid a public pushback.

The development of GM fish will have great economic value, protect national food security and help build sustainable agriculture, according to Wang Yaping, a researcher at the Chi-nese Academy of Sciences' Institute of Hydrobiology, speaking in an exclusive inter-view with China Daily.

In early August, Canadian supermarkets became the first in the world to sell a fast-grow-ing GM salmon developed by AquaBounty Technologies, a biotech company in the US.

However, few people realize that in 1983 China was the first country to produce transgenic fish called guanli, or "crown carp", said Wang, one of the lead scientists behind the carp's development.

The fish has passed all the nutritional, toxicology and allergen tests conducted by the China National Center for Food Safety Risk Assessment. It is now undergoing ecological tests to determine how it inter-acts with other species in the wild, along with commercial production tests to pinpoint how effectively it can be mass produced.

When the tests have been completed, the Ministry of Agriculture and other regulatory bodies are likely to issue a final safety certificate that will allow the fish to be sold on the domestic market.

"So far, there has been no indication of negative effects on health or the environment," Wang said. "If all goes well, crown carp will be on dinner tables within two to five years."

Scientists created the guanli by mixing growth hormone genes of a fast-growing, grass-eating carp with those of an omnivorous carp species native to the Yellow River.

"One common misconception people have is that growth hormones are anabolic steroids, but they are totally different substances - the former is a type of protein and the latter is a synthetic drug designed to mimic the muscle-building qualities of testosterone," Wang said.

Unlike steroids, which can build up in the body and cause a range of health issues, growth hormones can be bro-ken down into amino acids, losing their growth-stimulating properties, and absorbed as nutrients.

Wang said scientists have been taste-testing the fish for several years and have found no differences from regular carp: "Crown carp are essentially as safe to eat as conventionally grown carp."

The fish can grow to adult size twice as quickly as conventionally farmed carp, reaching the adult size of 1 kilogram in just 12 months. In addition, it requires about 10 percent less food to reach maturity and can eat a wider range of foods, from microorganisms to grass.

Those factors mean wide-spread production of the fish will save time and labor, and reduce costs. "It will have tremendous economic value considering how important carp has been in the Chinese diet," Wang said.

Last year, various types of carp were the staples of China's 2.37 trillion yuan (US$365 billion) aquaculture industry. At 5.9 million metric tons, grass carp were the most widely grown freshwater species, according to a report published by the Fisheries Bureau at the Ministry of Agriculture.

"Given the significance of carp, we must go the extra mile to make our creations completely safe for both consumers and the environment," Wang said.

One widespread concern is that the fast-growing, eat-any-thing crown carp will outcompete other aquatic wildlife, dominating and disrupting the ecosystem with its off-spring and genes.

As a result, crown carp are now grown in confined tanks, but the threat that the fish could escape into the wild has seen scientists weaken its survival and reproductive capabilities via bioengineering.

To eliminate the environ-mental risk, scientists have also developed an infertile, transgenic carp called jili, or "lucky carp", which has the same fast-growth characteristics, but is unable to pass on its genes, Wang said.

Scientists hope jili will become a new source of food.

In July last year, the Institute of Hydrobiology signed a contract with Dahu Aquaculture, one of China's biggest suppliers of freshwater products, to accelerate the commercialization of crown and lucky carp.

The company said plans for commercialization are awaiting final approval from the Ministry of Agriculture and other regulatory agencies. At present, though, the cost of producing the carp on an industrial scale remains largely unknown, along with the potential future revenue. 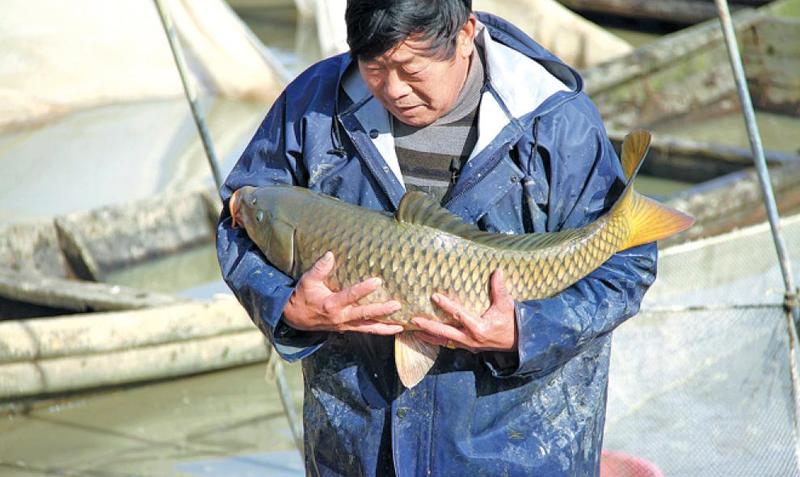 A worker holds a guanli, a genetically modified species of carp, at a fish farm in Hubei province. (PHOTO PROVIDED TO CHINA DAILY)

Chinese scientists have also developed a dozen other species of GM fish, including cat-fish, tilapia and bream. Despite their potential, Wang said it will not be easy for them to reach the market.

AquaBounty's salmon was stuck in regulatory limbo for two decades before it was approved in the US in 2015. Last year, Canada approved sale of the fish, despite wide-spread opposition.

Although the UN Food and Agriculture Organization and the World Health Organization have stated that GM foods which have undergone rigorous scientific research and are approved by law are safe for consumption, there are still a number of potential negatives.

Massive cultivation of a single GM crop can potentially undermine biodiversity, intro-duce mutated genes into the environment, transfer allergenic and antibiotic-resistant genes to other animals, and allow the private sector to dominate the market.

According to Wang, China has enacted more than a doz-en laws to regulate transgenic organisms since 1993. While imported GM soybeans and corn are used as feed for live-stock, human consumption of GMO foods is still banned, with the exception of cooking oil and papayas.

A survey of more than 2,400 people conducted by CAS' Center for Chinese Agricultural Policy between 2002 and 2012 indicated that public acceptance of GM foods fell dramatically during the period, from 67 percent to 31 for GM rice and from 55 percent to 23 for GM soybeans.

The survey also found that knowledge of GM crops remains low. About 50 percent of those interviewed in 2012 said they knew nothing about the effects of GM foods on humans, while 45 percent said they had a negative effect, a rise of 32 percent from 2002.

Negative media coverage, false information on the inter-net and China's rising imports of GM crops were among the reasons for the controversy, the survey found.

Wang is concerned that the guanli could face the same public pushback as the US salmon. As a result, he said the promotion of such fish should be conducted meticulously to avoid an outcry.

"While we can make the fish as safe as possible, we also need clearer laws and guide-lines on the farming, labeling, selling and export of GM organisms," he said.

Despite that, he is optimistic about the eventual acceptance of GM foods. "For two centuries, Europeans thought tomatoes were toxic. It takes time for people to accept new things," he added.

"Scientists and the media should take every opportunity to educate people. Knowledge and rationality should leap onto the table first, before GM carp."