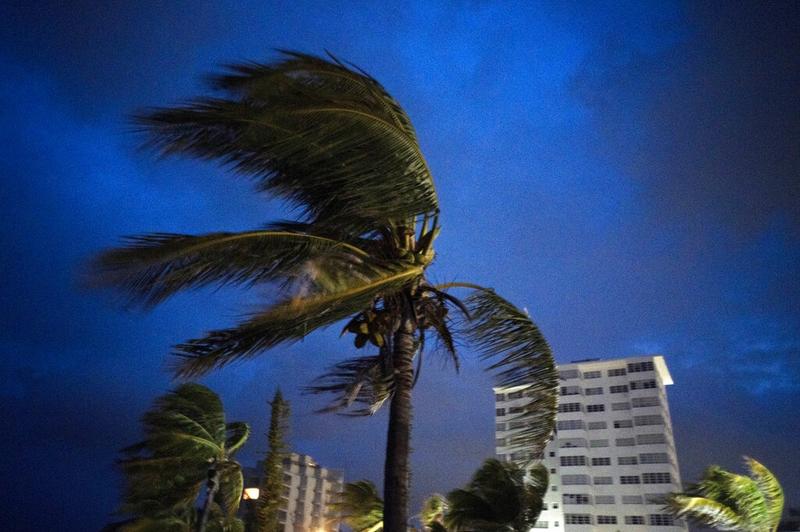 Strong winds move the palms of the palm trees at the first moment of the arrival of Hurricane Dorian in Freeport, Grand Bahama, Bahamas, Sept 1, 2019. (RAMON ESPINOSA / AP)

TITUSVILLE, Fla — Hurricane Dorian, the second-strongest Atlantic storm on record, pounded the Bahamian islands of Great Abaco and Grand Bahama on Sunday night and was forecast to move dangerously close to Florida in the next two days, US forecasters said.

At 11 pm GMT, the hurricane was about 220 km from the Florida coast, parts of which were being evacuated, as it crawled westward. Farther north, South Carolina Governor Henry McMaster ordered mandatory evacuations for parts of eight coastal counties effective at noon on Monday.

Georgia Governor Brian Kemp ordered evacuations in all or parts of six coastal counties also effective at noon on Monday.

Even a glancing blow from one of the strongest storms ever to menace Florida could bring torrential rains and damaging winds, the NHC said.

READ MORE: Bahamas hunkers down as Hurricane Dorian closes in 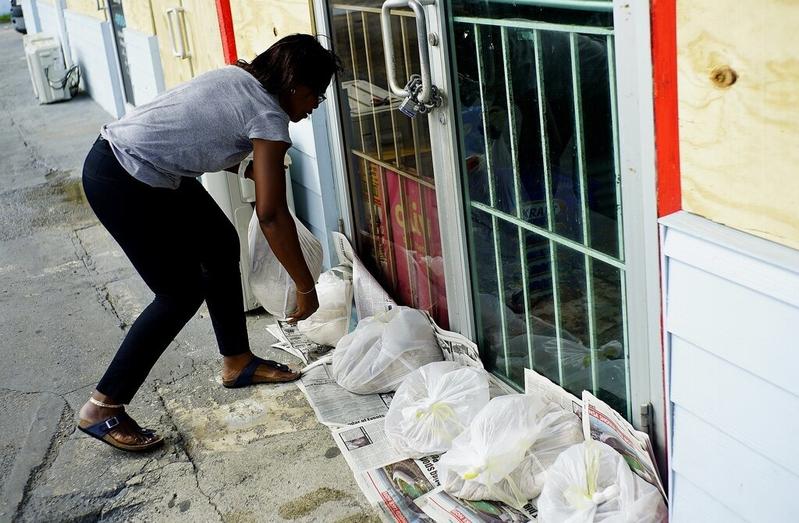 Yolande Rolle puts sandbags at her shop's doorstep as she prepares for the arrival of Hurricane Dorian in Freeport on Grand Bahama, Bahamas, Sept 1, 2019. (RAMON ESPINOSA / AP)

"On this track, the core of extremely dangerous Hurricane Dorian will continue to pound Great Abaco and Grand Bahama islands tonight and Monday," the NHC said. "The hurricane will move dangerously close to the Florida east coast late Monday through Tuesday night." 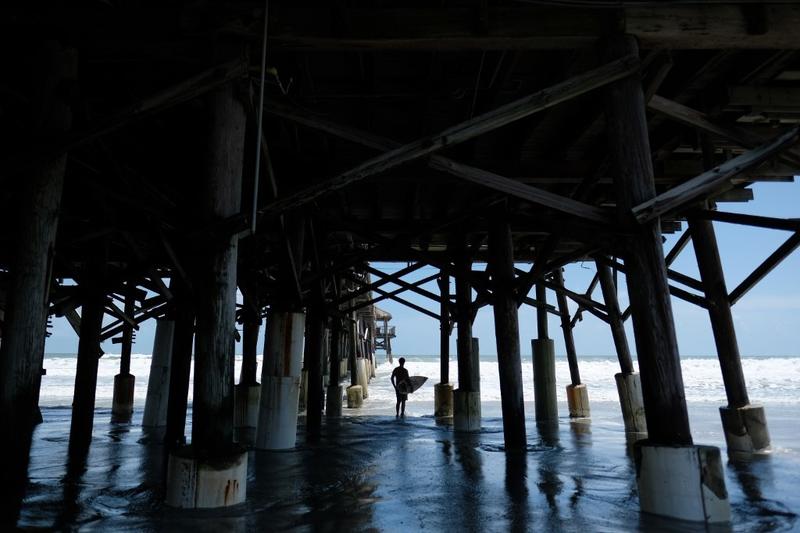 A surfer prepares to paddle out in Cape Canaveral, Florida, as Hurricane Dorian approaches on Sept 1, 2019. (RICARDO ARDUENGO / AFP)

Dorian is forecast to remain a hurricane for the next five days, the NHC said. Dorian made landfall on Elbow Cay in the Abaco Islands with maximum sustained winds of 295 kph and gusts of more than 354 kph.

Dorian was the strongest hurricane on record to hit the northwestern Bahamas as a life-threatening Category 5 storm on the five-step Saffir-Simpson Wind Scale.

It was tied with Gilbert (1988), Wilma (2005) and the 1935 Labor Day hurricane for the second-strongest Atlantic hurricane on record, based on maximum sustained winds. Allen in 1980 was the most powerful, with 306 kph winds, the NHC said.

Julia Eaddy, 70, in Titusville, Florida, said she and her husband had ridden out several hurricanes before and were not fazed by the forecast. "I think it will be more of the same," she said.

Several gasoline stations around Titusville were closed. Many grocery stores were open but boarded up. Inside, shelves emptied out fast. 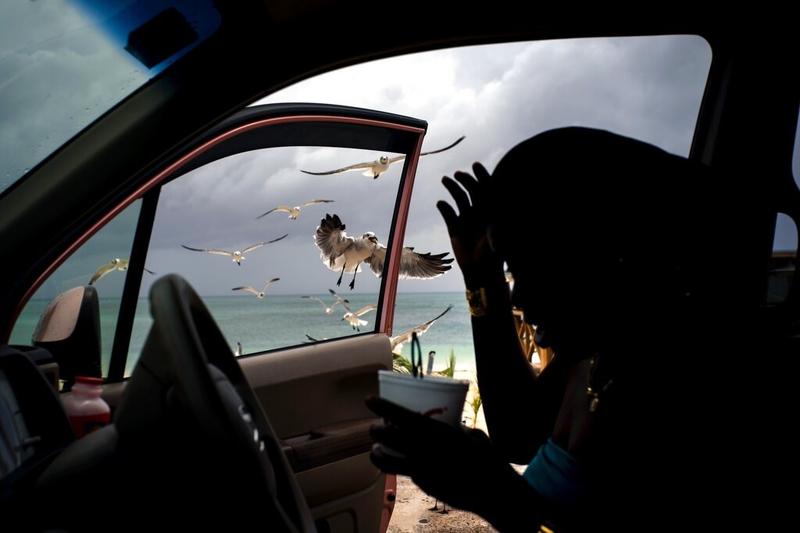 Seagulls fly toward a woman feeding them french fries from her car on Taino beach before the arrival of Hurricane Dorian in Freeport, Grand Bahama, Bahamas, Sept 1, 2019. (RAMON ESPINOSA / AP)

Like many officials in Florida, Governor Ron DeSantis warned residents against becoming complacent after forecasts began saying on Saturday that the state might escape a direct hit.

"This storm at this magnitude could really cause massive destruction. Do not put your life in jeopardy by staying behind when you have a chance to get out," DeSantis said, urging people to heed evacuation orders from county officials. 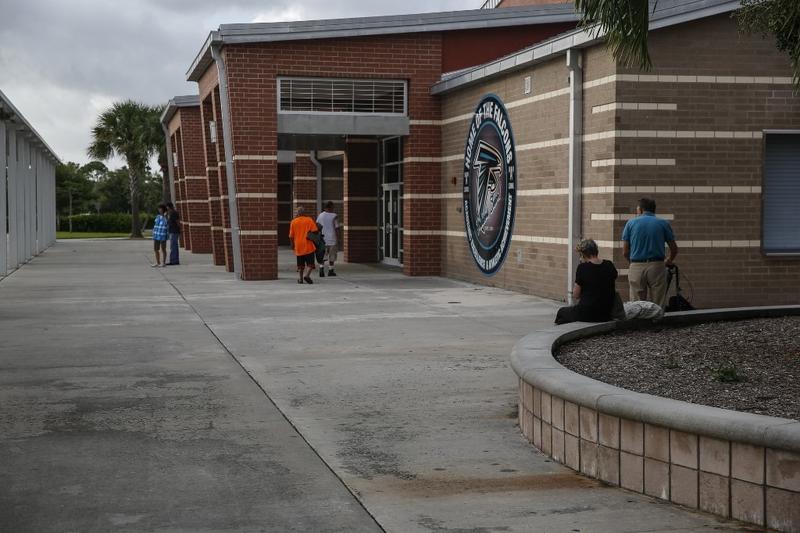 Dozens of Floridians who live in boats in marinas in Brevard County were rushing to secure their vessels, strapping them to docks and removing canvas coverings from decks, but some boat residents said they wanted to ride out Dorian.

"I will not get off this boat during the hurricane for any reason at all, save a human life," said Ned Keahey, 56. "It's home." 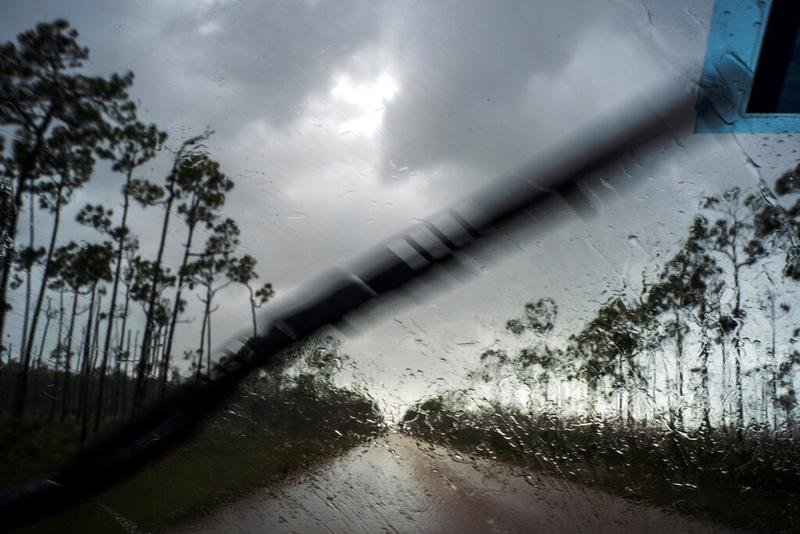 A car returns to the capital under the previous rain before the arrival of Hurricane Dorian in Freeport, Grand Bahama, Bahamas, Sept 1, 2019. (RAMON ESPINOSA / AP)

Residents on Abaco posted video on social media showing floodwaters halfway up the sides of single-family homes with parts of the roofs torn off. Car alarms blared across the island, which was littered with twisted metal and splintered wood.

Forecasters predicted up to 76 cm of rain. The storm was moving at just 9 kph on Sunday night, prolonging a pummeling expected to last for hours, the NHC said.

Bahamian Prime Minister Hubert Minnis said in a nationally televised news conference that a "deadly storm and a monster storm" was battering the islands. Homes there are built to withstand winds of at least 241 kph, but the expected storm surge was higher than the average roof.

"This will put us to a test that we've never confronted before," Minnis said. "This is probably the most sad and worst day of my life to address the Bahamian people." 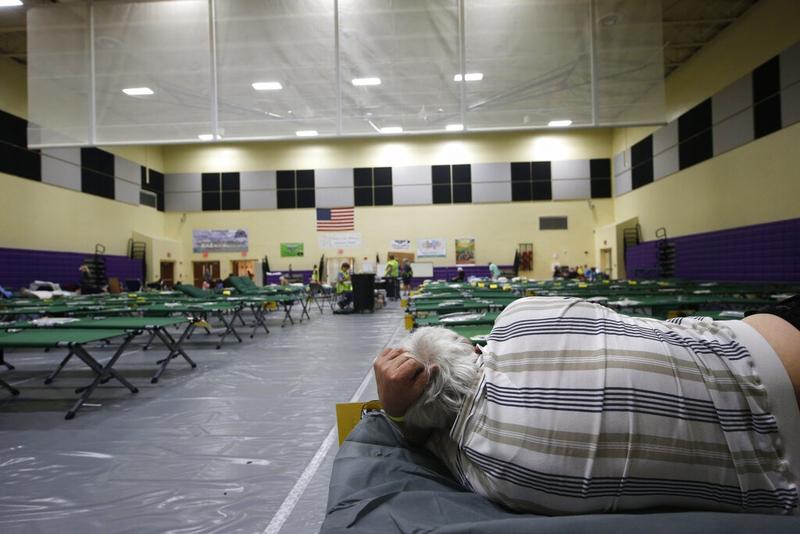 An evacuee lies on a cot at an evacuation shelter for people with special needs, in preparation for Hurricane Dorian, at Dr. David L. Anderson Middle School in Stuart, Fla, Sept 1, 2019. (GERALD HERBERT / AP)

"This looks like it could be larger than all of them," Trump said during a briefing with the Federal Emergency Management Agency (FEMA).

Also on Sunday, a new tropical storm formed southwest of Mexico and was expected to become a hurricane on Monday, the NHC said. Tropical Storm Juliette was 735 km from Manzanillo, Mexico, with maximum sustained winds of 95 kph, the NHC said. 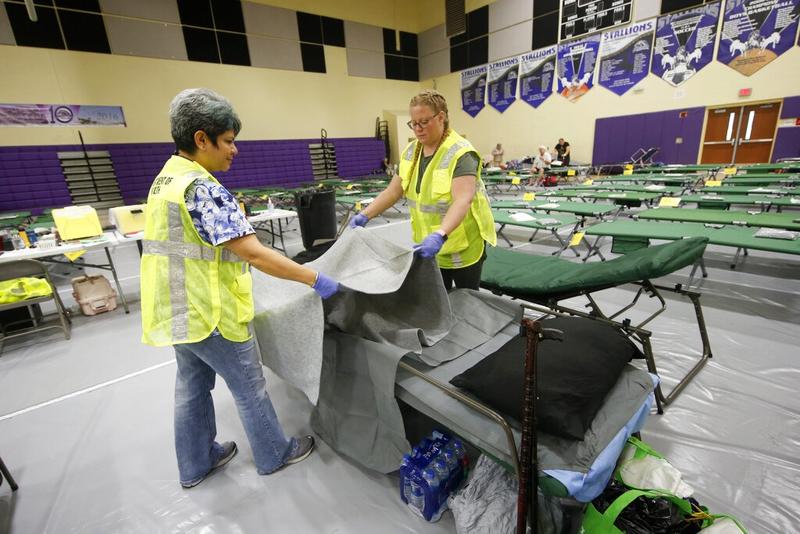