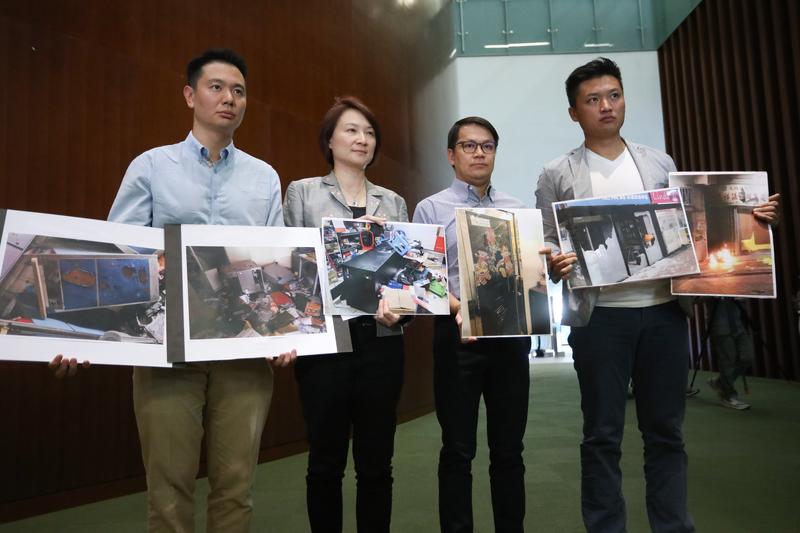 Starry Lee Wai-king (second left), chairwoman of the Democratic Alliance for the Betterment and Progress of Hong Kong, and other alliance members display photos of damage caused by protesters at a DAB branch office. (PHOTO / CHINA DAILY)

Chief Executive of Hong Kong, Carrie Lam Cheng Yuet-ngor, cautioned on Tuesday that all sectors of the city will face a “chilly winter”, as protracted violence has taken a heavy toll on the city’s economy and people’s livelihoods.

Before the weekly Executive Council meeting, Lam told reporters that the social unrest that has lasted for more than four months has created far-reaching societal effects.

Hong Kong is in “a very dangerous situation” now, she said, vowing to stem violence with the utmost resolution.

Attacks by rioters brought the city’s railway network to an unprecedented standstill on Friday night and through Saturday.

As of Tuesday, MTR, the city’s rail operator, provided only limited subway service, and transportation remained chaotic for a fifth consecutive day.

The continued violence also has hit the special administrative region’s service industries, one of its economic pillars and the source of many grassroots jobs.

Retail, food and beverage, hospitality and tourism sectors have been particularly hard hit.

To prevent vandalism, many shopping malls have closed early in recent days. Retail sales saw a 25 percent year-on-year drop in August. Lam quoted an Executive Council member from the food and beverage sector as saying that mass layoffs, even shutdowns, are expected in local restaurants.

Tourists visiting Hong Kong in August, the usual peak season, dropped by 40 percent year-on-year. During the nation’s Golden Week holiday from Oct 1 to Monday, also a peak time for tourism, visitors in Hong Kong were half the number recorded in the previous year.

Lam said the HKSAR government will cut fees and rents for affected industries and provide tax waivers and unemployment allowances to affected residents.

Lam expressed hope that Legislative Council meetings will resume as scheduled on Oct 16 to deliberate stalled bills, including livelihood-related projects worth more than HK$100 billion ($13 billion).

On Tuesday, the LegCo announced that work to repair large-scale vandalism by rioters on July 1 is almost finished.