Bucks finish with a flourish, rally to top Raptors 108-100 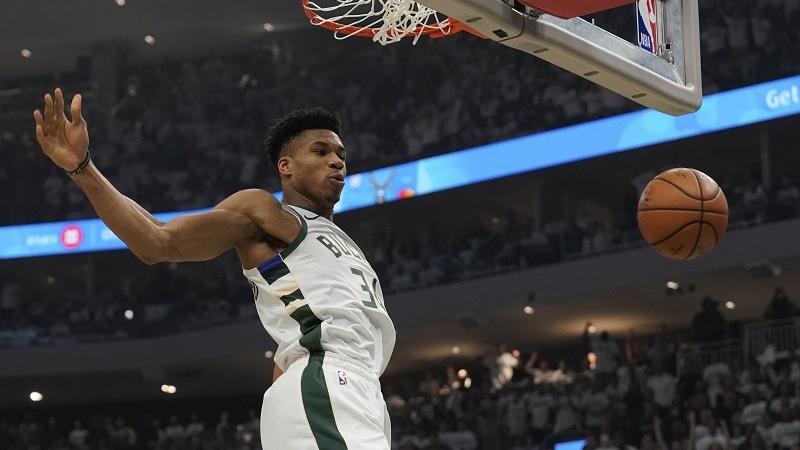 Milwaukee Bucks' Giannis Antetokounmpo dunks during the first half of Game 1 of the NBA Eastern Conference basketball playoff finals against the Toronto Raptors May 15, 2019, in Milwaukee. (MORRY GASH / AP PHOTO)

MILWAUKEE - Down for most of the game, clearly rusty at times after nearly a full week off, the Milwaukee Bucks looked very much like a team in trouble.

Until the fourth quarter.

The team with the NBA's best record this season found its stride at the perfect time.

They outplayed us in that fourth quarter. They got a little bit more aggressive.

Brook Lopez scored 13 of his career playoff-high 29 points in the fourth quarter, Giannis Antetokounmpo added 24 points and the Bucks closed the game on a 10-0 run to beat the Toronto Raptors 108-100 in Game 1 of the Eastern Conference finals on Wednesday night.

Milwaukee forced Toronto to miss its final eight shots and outscored the Raptors 32-17 in the fourth.

"I think it speaks a little bit to the character of the group," Bucks coach Mike Budenholzer said. "They just stick with it. I think it's become a little bit of a theme in the playoffs: I think eventually, hopefully, we feel like if we stick with what we're doing good things will happen for us."

Lopez had a dunk with 2:20 left to put the Bucks ahead for good, added a 3-pointer on the next Milwaukee possession to push the lead to four and the Bucks - after trailing for the overwhelming majority of the game - did just enough in the final minutes to grab the series lead.

"I think this game definitely made us better," Antetokounmpo said. 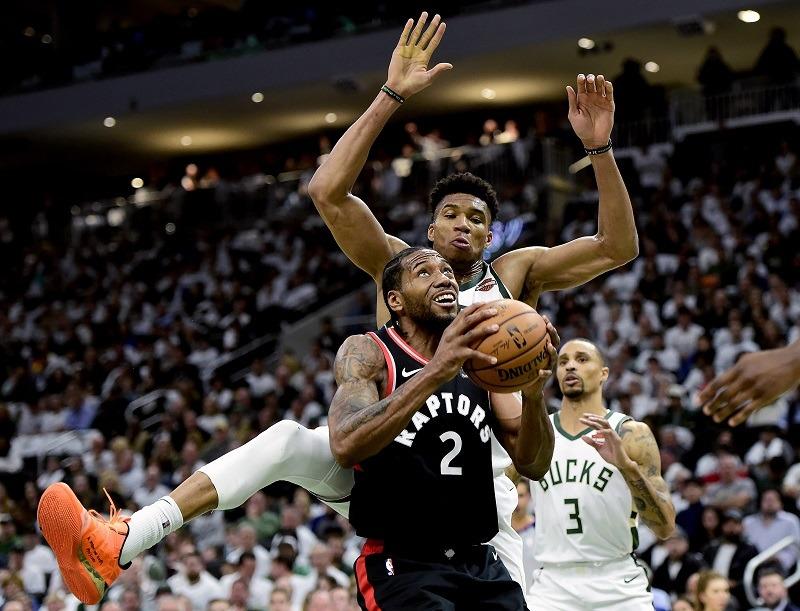 Toronto Raptors forward Kawhi Leonard (2) gets fouled by Milwaukee Bucks forward Giannis Antetokounmpo (34) during the second half in Game 1 of the NBA basketball playoffs Eastern Conference final in Milwaukee on May 15, 2019. (FRANK GUNN / THE CANADIAN PRESS VIA AP)

Malcolm Brogdon scored 15 and Nikola Mirotic had 13 for Milwaukee, which closed the game on a 10-0 run.

"We just did a great job of sticking with what we've been doing all postseason long," Lopez said.

"Fourth quarter killed us, 32-17," Lowry said. "They outplayed us in that fourth quarter. They got a little bit more aggressive. They made some big shots, made some big plays. It sucks when you lose like that. But we had our chance and we've got to learn from it."

Lopez added 11 rebounds for the Bucks, who had three players post double-doubles. Antetokounmpo had 14 rebounds and Khris Middleton finished with 11 points and 10 rebounds for Milwaukee, which is now 9-1 in this postseason.

The Bucks trailed for 37 of the game's 48 minutes.

Didn't matter. They stayed just close enough until they could finish with a serious kick.

"The way guys competed and just got after it ... stands out to me," Budenholzer said.

Toronto Raptors guard Kyle Lowry (7) passes the ball under pressure from Milwaukee Bucks forward Nikola Mirotic (41) during the second half in Game 1 of the NBA basketball playoffs Eastern Conference final in Milwaukee on May 15, 2019. (FRANK GUNN / THE CANADIAN PRESS VIA AP)

Pascal Siakam scored 15 for Toronto, including a 3-pointer over Antetokounmpo to end the third quarter and give the Raptors a seven-point lead with 12 minutes left.

It unraveled quickly from there. And now the Raptors, who came in on the high of winning a second-round Game 7 on a buzzer-beater by Leonard, have two days to regroup.

"The game is over," Toronto's Marc Gasol said. "We got to look back at it and learn but we can't think too much about it. You come out Game 2 and try to win. You can't replay this one."

With the chants of Milwaukee's motto - "Fear the deer! Fear the deer!" - bouncing throughout the building, the Bucks predictably came out flying.

The flurry was brief.

The Bucks missed seven consecutive shots, the Raptors made four 3-pointers in a span of three minutes, and that all helped become a 16-0 run by Toronto that turned an early 8-3 deficit into a 19-8 edge. The lead got as big as 13 later in the quarter on a fadeaway jumper by Leonard, and the Raptors held the lead the rest of the half.

Milwaukee had a chance to take its first lead since the opening minutes when Antetokounmpo went to the line for a pair of free throws with 8:17 left in the third and the Bucks down by one. He missed both and the Raptors peeled off the next nine points to rebuild a 10-point lead again.

But Toronto shot 5 for 22 in the fourth, the Bucks finally reclaimed the lead, and the Raptors' chance to steal home-court went awry.

"We gave ourselves a chance to win on the road in an Eastern Conference final," Raptors coach Nick Nurse said. "And it didn't turn out." 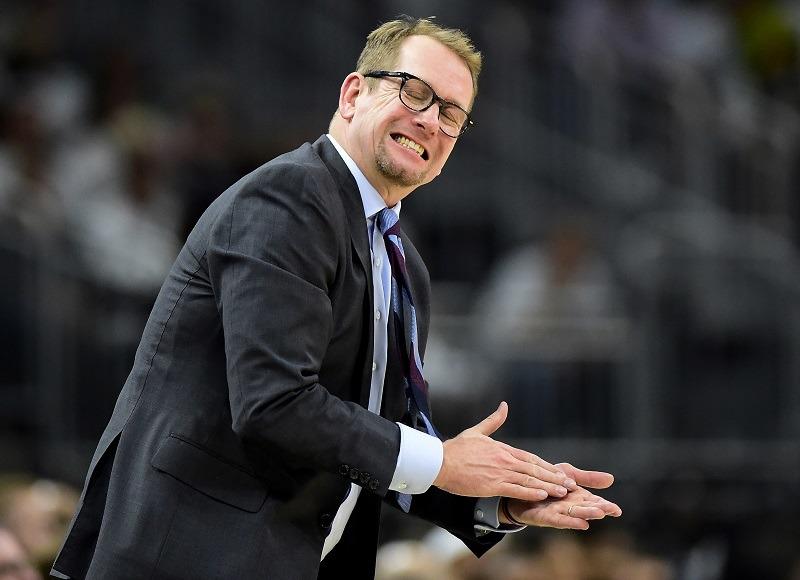 Toronto Raptors coach Nick Nurse reacts during the second half in Game 1 of the team's NBA basketball playoffs Eastern Conference final against the Milwaukee Bucks in Milwaukee on May 15, 2019. (FRANK GUNN / THE CANADIAN PRESS VIA AP)

Raptors: Toronto is now 3-15 in Game 1s. ... The Raptors fell to 8-1 in these playoffs when leading at halftime. ... Lowry's seven 3-pointers were a season high, a playoff career high and one off his career high. ... Leonard, who made the already-immortal four-bounce-off-the-rim jumper to win Game 7 of the second round against Philadelphia, got a friendly bounce in the third quarter - when a jumper hit the iron three times before falling.

Bucks: Oscar Robertson, part of Milwaukee's lone NBA title team, was recognized in the first quarter and held the 1971 championship trophy - a large silver bowl atop a wooden base, not the golden Larry O'Brien Trophy of now - for the fans to see. ... Antetokounmpo started super-fast with two baskets, a steal, a rebound and a blocked shot, all in the first 85 seconds. ... Pearl Jam's Jeff Ament was courtside.

With Pau Gasol injured, George Hill is the only Milwaukee player who had appeared in a conference finals game before Wednesday. The Raptors have seven players who had been in at least one previously: Leonard, Danny Green and Serge Ibaka are all in this round for the fifth time, while Lowry, Marc Gasol, Norman Powell and Patrick McCaw have also been in this round before.

Leonard became the 14th player in NBA history to score 400 points in his team's first 13 games of a postseason run. He now has 413 so far in these playoffs.

Game 2 is Friday in Milwaukee.