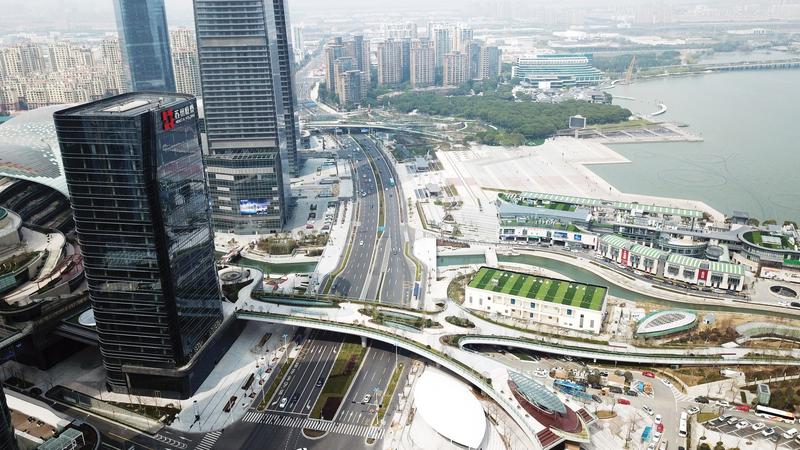 An aerial view of the city center in Suzhou, East China’s Jiangsu province, on March 24. The city’s multi-layered collaborations within government create opportunities for policymaking and operational issues to be ironed out smoothly and efficiently. (PHOTO / IMAGINECHINA)

Li, who was meeting Singapore’s Prime Minister Lee Hsien Loong, said he was “very impressed with the urban management of the city” and he hoped to deepen collaborations between Shanghai and Singapore. He also said that, for decades, he has considered Singapore a “role model” for Shanghai’s development.

People often refer to Singapore as a miracle, after learning that it went from Third World to First World within 25 years. In 1960, 1.3 million of Singapore’s then population of 1.65 million lived in slums and squatter colonies. In 1965, the unemployment rate was 14 percent, with per capita GDP at US$516.

But while such transformation seems impressive, nothing was accidental or serendipitous. Singapore’s transformation has been a concerted effort by a good government, steeped in an intelligent administrative culture and bolstered by competent professionals in urban planning and development.

This culture underpins every effort to shape a model city. These comments are based on my experience from having served in the Singapore government for 24 years and from sharing experiences with other urban management thought leaders in the last decade at the World Cities Summit, in my role as chairman of the Advisory Board of Singapore’s Centre for Liveable Cities.

An intelligent administrative culture is shaped, first, by a government’s ability to spot problems often before its citizens are aware of them and, second, by having a host of smart, structured agencies staffed by competent professionals whose roles are defined clearly — and who believe and practice in developing a city or country in an intelligently coordinated way.

Spotting a problem before anyone else does, buys a government time to tackle its root causes. For example, as I understand it, the 4.5 million inhabitants of Surat, India’s diamond capital, are likely to face serious floods in future from increasingly hotter weather and heavier rainfall. Anticipating this, Surat’s city administrators are working with private companies and have joined international city networks to get the technical and financial assistance they need. Surat’s administrators have also identified and registered all its residents who can swim, and have stored boats in all fire stations.

It is tempting for anyone to address only the symptoms of trouble as that is much easier than wrestling with fundamentals. But neither Surat nor Singapore simply focus on symptoms or do anything piecemeal, no matter how small the problem might be.

For example, in the 1960s when there were many broken footpaths all over Singapore, the government set up a Walkway Unit just to fix the underlying and related causes once and for all.

Such agencies are effective and efficient from having a structured, problem-solving process. It starts with a public discussion of any problem; drafting plans and laws to address that; getting public feedback on such plans or laws; tweaking the plans or laws based on such feedback; and then implementing such plans or laws credibly.

This way of working is, unfortunately, not as widely practiced as one would wish. In Brazil, the initial difficulty in getting all of Rio de Janeiro’s government arms to work together well for the 2016 Summer Olympics, especially on crowd safety, is now legendary.

But as I have learned from the many mayors at the World Cities Summit, they are trying their best to redesign the way they work so they have smart, structured agencies too. For example, the agencies within the governance structure of Auckland, New Zealand, used to be somewhat disconnected, resulting in a less than desirable infrastructure provision. But Auckland has since restructured its governance tightly, and in the same process improved the lot of its minority communities.

So, when everyone in government is committed to working shoulder to shoulder, such as in a number of Chinese cities, and Auckland and Singapore, miracles happen. For example, the multi-layered collaborations within government in Suzhou, East China’s Jiangsu province, create opportunities for kinks in high-level policymaking and operational issues to be ironed out smoothly and efficiently.

In Singapore, its political leaders rarely interfere with how the professionals in government do their work, which strengthens the trust between them. It is a double-edged sword as professionals like myself were free to work as we thought best, but also bore the heavy burden of delivering good results.

However, the Singapore urban plans and their corresponding rules and regulations were so clearly defined, it was found desirable to give developers the chance to air their concerns or suggest better ideas. After careful evaluation, some of these ideas are incorporated into our plans and regulations. I worried that, otherwise, our master plan might eventually become outdated or irrelevant. A planner’s job is not to show off his power, but to deliver a good city for all.

Today, that best practice has become so trendy that many governments are partnering those outside government to shape better cities. Medellin, which is Colombia’s second largest city, used to be one of the world’s most dangerous cities because it was overrun by drug lords.

But in recent years, its dynamic former mayor, Anibal Gaviria Correa, and his team partnered the city’s publicly owned utilities company to funnel about 30 percent of its profits into infrastructure projects to spruce up Medellin. Among their projects was a cable car system for those living in Medellin’s hills to come into the city’s downtown fast and easily. That also boosted the social integration of its poorer hill folk with its richer denizens downtown.

To keep the city’s youths away from drugs, Correa also scattered book-lined pods around Medellin, and invited the city’s music-loving youths to perform in public squares. His efforts won Medellin the Lee Kuan Yew World City Prize in 2016.

My take on this intelligent administrative culture is that the clarity of a government’s commitment to tackle problems at their root causes, plus the capability of competent professionals, equals courage.

What city dwellers would not want, in contrast, are politicians so seized with glamorous architectural designs that they forgo the time to focus on other pressing urban management in the process, dragging the professionals working with them to devote more time on architectural design too. That would create a vacuum in city planning, which private developers would have no choice but to fill, in rather uncoordinated ways.

In the 1960s, it took courage for Singapore’s fledgling government to move a massive number of squatters into high-rise, high-density public flats. That housing model was then almost universally condemned elsewhere.

But the government bit this bullet as it saw that building compactly and skywards was Singapore’s only option to house all her citizens, as it had so little land. The government also built such flats for sale — not rent as has been the case in most parts of the world. Today, 93 percent of Singaporeans and permanent residents happily own their flats.

All told, an intelligent administrative culture gives everyone involved in creating a city the courage to shape and build as perfect a stage as possible, on which its people can shine in performing their exciting life’s dramas.

The author chairs the Advisory Board of the Centre for Liveable Cities, a division of Singapore’s Ministry of National Development. He is also founder-chairman of architectural and planning firm Morrow. For more information on the World Cities Summit, refer to www.worldcitiessummit.com.sg