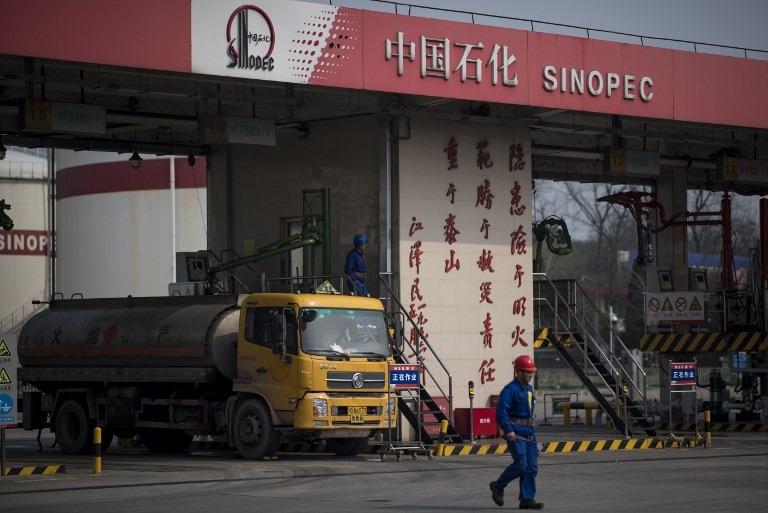 This picture taken on March 22, 2018 shows a man walking past a filling station of Sinopec, China Petroleum and Chemical Corporation, in Shanghai. (JOHANNES EISELE / AFP)

China's efforts to promote the use of biofuel received key impetus last month with the announcement of encouraging initial findings of a pilot project involving biodiesel in Shanghai, and from rapid progress in the adoption of bioethanol gasoline elsewhere.

In addition, infrastructure worth billions of dollars is being planned or created to support promotion of biofuels.

The developments have significant implications for the country's drive to broad-base its energy-mix, achieve energy security and cut polluting emissions, industry insiders said.

A breakthrough-like sign is that China Petroleum & Chemical Corp, the country's largest oil refiner, said it is ready to step up its involvement in the biofuel market in a serious way.

Among industry circles, this is seen as nothing less than a tectonic shift in strategy. For, biofuels, although desirable from an environmental point of view, are more expensive than traditional fuels like diesel and gasoline, hence a sales challenge (more about this aspect in a bit).

To further promote use of biodiesel, the Shanghai municipal government will increase the number of biodiesel fueling stations from the current 21 to 200 by the end of this year

For long, China Petroleum & Chemical Corp, which is also known as Sinopec, has been known for its leading role in traditional
energy like oil and gas.

Now, however, emboldened by the findings of its pilot biodiesel project, Sinopec is itching to switch gears and ramp up its biofuel play.

In 2016, the company started fueling vehicles in Shanghai with B5, a biofuel made from recycled cooking oil, commonly known as "gutter oil". B5 consists of 5 percent biodiesel and 95 percent diesel, and hence helps cut carbon emissions.

So far, Sinopec's Shanghai pilot project has provided more than 10 million liters of B5 to more than 130,000 vehicles.

More than 2,000 trucks and pickups run on B5 every day in Shanghai. B5 has been also used to power airplanes and buses in China. More than 100 buses on 10 routes have used biodiesel since early last year in Shanghai.

After years of efforts, B5 has forayed into the retail space. It is sold alongside other petroleum products, Sinopec said.

"The biodiesel has received positive responses from drivers. They said there's no difference in their vehicle's performance after they started using the biodiesel," said Xu Kunlin, vice-mayor of Shanghai.

The ministry will announce unified national emission standards for new vehicles, to encourage the research and development of automobiles that can run on alternative fuels such as natural gas, liquefied petroleum gas, ethanol and biodiesel. 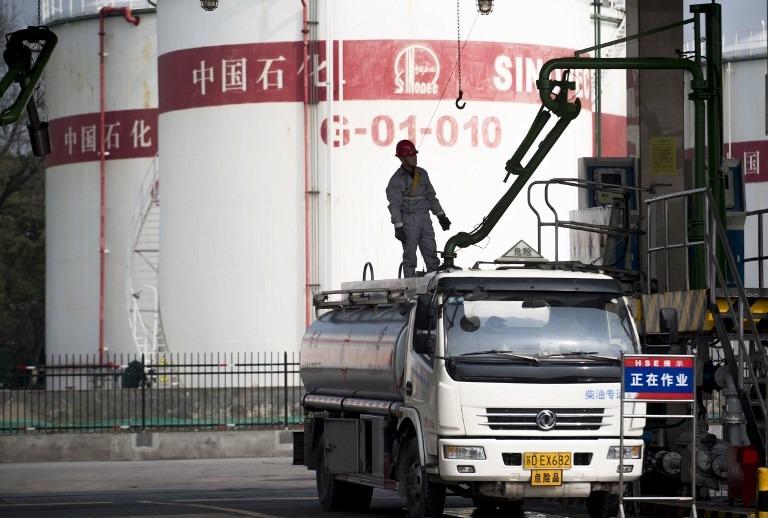 This picture taken on March 22, 2018 shows a man working in a filling station of Sinopec, China Petroleum and Chemical Corporation, in Shanghai. (JOHANNES EISELE / AFP)

Trucks in Shanghai fill up B5 at Sinopec's company site. To prepare for a future involving alternative fuels, Sinopec is mulling plans to expand its biodiesel stations to other major cities across the country.

Besides expanding the station network, more specialized pumps will likely be built to facilitate use of biofuel in the future, Sinopec said. But such investments would depend on whether or not the Shanghai B5 pilot project is considered a total success.

Yet, to further promote use of biodiesel, the Shanghai municipal government will increase the number of biodiesel fueling stations from the current 21 to 200 by the end of this year.

This would mean, Sinopec will have to use all of the gutter oil produced in Shanghai as raw material to manufacture biodiesel.

Analysts said the B5 pilot project, if it proves to be an unqualified success, would help further promote the application of biodiesel, an alternative energy that might have significant influence on the country's energy security.

For years, the authorities have focused on converting waste oil into cooking oil-derived biofuel, to further cut carbon dioxide emissions while clamping down on illegal trade in gutter oil.

China's push to promote biofuel as an alternative fuel is tempting companies from various industries to vie for a larger share of the world's fastest-growing new energy vehicle market.

Since the end of 2016, more than 100 logistics trucks of Swedish furniture maker Ikea have been running on fuel composed of biodiesel derived from cooking oil. The amount of gutter oil in the fuel varies from 5 to 10 percent.

Although China boasts rich reserves of coal, the country sees shortage of oil. So, the development of biofuel is expected to not only further diversify the energy mix but also curb pollution, said Lyu Bo, head of the National Biodiesel Industry Technology Innovation Strategic Alliance.

Companies should be encouraged to set up more biofuel pilot projects. The government could also consider promoting bioethanol and come up with compulsory biodiesel usage policies or subsidies for companies to further enhance the usage, he said.

China vows to further expand production and consumption of bioethanol fuel this year, a form of renewable energy that can be produced from crops such as corn and potatoes, as the country seeks more channels to use corn and grain stockpiles, the State Administration of Grain had said earlier.

The plan is for large-scale production of cellulose ethanol and advanced biofuel technologies by 2025. This is the first time the government has set a timeline for promoting a biofuel known as E10, which refers to gasoline with an ethanol content of 10 percent.

The government also said it aims to build an ethanol production base in the country's northeast, the main corn-growing region. Further details are awaited.

According to Zhou Dadi, former director of the Energy Research Institute of the NDRC, one of the major advantages of ethanol fuel is its low carbon content. It has been widely used in the United States and Spain.

But analysts expressed concern over the challenges that lay ahead in promoting large-scale use of biofuels.

Despite the fact that Shanghai has been promoting the use of B5 and even other biofuels for years, sourcing or collection of raw materials still remains a big challenge.

So, large-scale production of biofuels, while desirable, may be still a few years away, said Li Li, research director at energy consulting firm ICIS China.

Unless crude oil prices surge so high as to become unaffordable, it might be very difficult to promote alternative fuels on a national scale, she said.

More technological breakthroughs are needed to lower biofuel price and increase the production efficiency of fuel ethanol, she said.