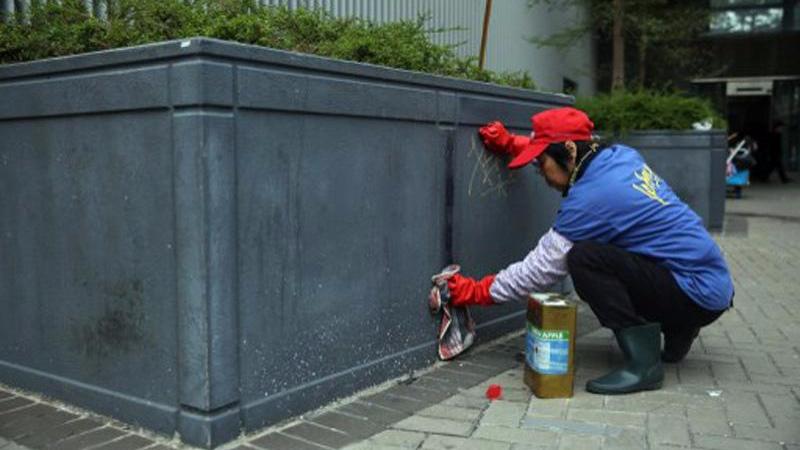 A worker cleans the area of the main pro-democracy protest site in the Admiralty district of Hong Kong on December 12, 2014. (ISAAC LAWRENCE / AFP)

Though discussions on potential working hours legislation have reached a deadlock after three and half years — with employee representatives quitting the Standard Working Hours Committee — Secretary for Labour and Welfare Law Chi-kwong said guidelines on the issue could still help employees.

In the absence of working hours legislation, guidelines for 11 sectors have been formulated. This includes “long hours” sectors such as cleaning and elderly services.

“Since employees can compare the guidelines with their number of working hours, the guidelines can serve the purpose of reminding the employers not to become harsh employers,” he added.

“The guidelines will also be useful if a legislative proposal for working hours is brought up again in future.”

He said the employer side is only willing to accept “working hours according to contracts”. The Standard Working Hours Committee recommended “contract working hours legislation” to the previous government. The trade unions are lukewarm to such a proposal.

There was also no consensus on putting those earning less than HK$11,000 a month under the protection of standard working hours.

He added that the current government has a duty to follow up with the recommendations. “Yet labor feels that a law that merely stipulates the number of working hours is decided by contracts doesn’t mean anything,” Law said.

He admitted the issue of working hours is very complicated. It also has far-reaching consequences beyond the statutory minimum wage.

Since each sector has its own characteristics, employers are reluctant to have an across-the-board ordinance for all sectors, fearing standard working hours will greatly affect the business environment.