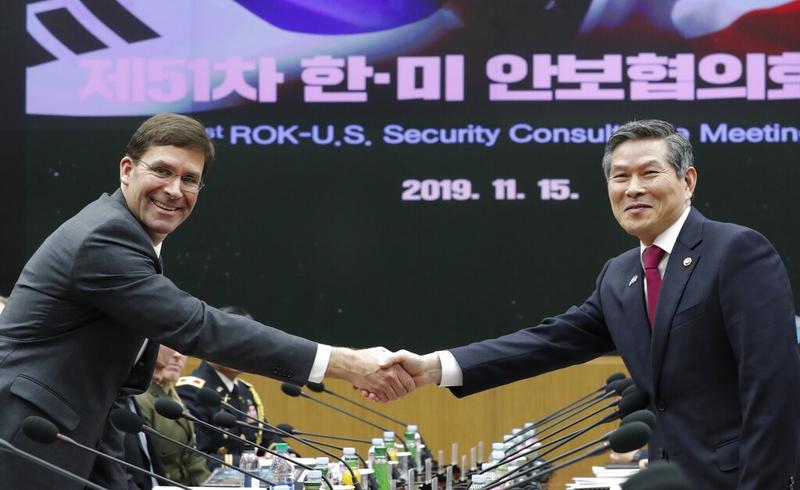 SEOUL — US Secretary of Defense Mark Esper pressed the Republic of Korea (ROK) on Friday to pay more for the cost of stationing US troops in the country and to maintain an intelligence-sharing pact with its other Asian ally Japan that Seoul is about to let lapse.

The ROK, Mark Esper said, "is a wealthy country and could and should pay more" for the deployment of US military in the South

Speaking after a high-level defense policy meeting with his ROK counterpart Jeong Kyeong-doo, Esper also said the two countries have to be flexible with their joint military drills to support ongoing diplomatic efforts to end the Democratic People's Republic of Korea's (DPRK) nuclear program.

But he stopped short of announcing any changes to exercises next month that the DPRK has sharply condemned.

The DPRK said on Thursday it had turned down a US offer for fresh talks ahead of a year-end deadline Pyongyang has set for Washington to show more flexibility in negotiations.

The United States and the ROK are scrambling to clinch an agreement in the coming weeks to cover next year's costs of maintaining the 28,500-strong US military presence aimed at deterring the DPRK.

The ROK, Esper said, "is a wealthy country and could and should pay more" for the deployment of US military in the South.

"It is crucial that we conclude the (defense pact) ... with increased burden sharing by the Republic of Korea before the end of the year," Esper told a news conference.

ALSO READ: S. Korea, US hold talks on cost-sharing for US Forces Korea

Jeong said he and Esper shared the view that the cost-sharing pact now being negotiated should be fair and mutually agreeable, but it was unclear if they shared any sense of what a fair amount might be.

A ROK lawmaker said last week that US officials demanded up to US$5 billion a year, more than five times what Seoul agreed to pay this year under a one-year deal.

US President Donald Trump's insistence Seoul take on a greater contribution as deterrence against the DPRK has rattled the ROK. It could also set a precedent for upcoming US negotiations on defense cost-sharing with other allies.

Jeong said he and Esper discussed personal views on ROK's decision to end an intelligence-sharing pact with Japan, called GSOMIA, and that both governments will put in realistic effort to narrow differences before the pact expires on November 23.

Relations between the two neighbors have plunged after ROK's top court last year ordered Japanese firms to compensate some wartime forced laborers, and Japan curbed exports of key industrial materials to the ROK in July.