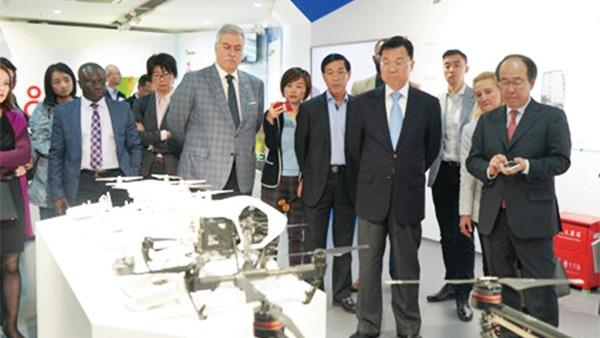 It (the tour to the Bay Area) will also help governments in the region listen to the suggestions from political and business sectors from overseas, and jointly tap the region’s potential

The group from more than 20 countries and regions ended a three-day visit to the Bay Area on Saturday, saying they see promising prospects and abundant business opportunities there.

The tour, organized by the Commissioner’s Office of the Ministry of Foreign Affairs in the HKSAR, was among the first high-level visits by foreign delegations to the Bay Area since the central government unveiled the development outline for the 11-city cluster on Feb 18.

Xie Feng, commissioner of the Ministry of Foreign Affairs in Hong Kong, who led the tour, said it offered a rare chance for members of the delegation to seek collaboration opportunities in the Bay Area. It will also help governments in the region listen to the suggestions from political and business sectors from overseas, and jointly tap the region’s potential.

Many of the team members were impressed by the Chinese mainland’s rapid development and its fast-evolving technology and innovation sector.

Some promised to support enterprises from their own countries and regions in seeking business opportunities in the Bay Area through closer cooperation with Guangdong to achieve a win-win situation.

He hopes the high-speed rail network could link up China, Vietnam and other Southeast Asian countries in future. He also believes the Bay Area could be a significant platform for Vietnam’s future cooperation with China and the Hong Kong SAR.

France’s Consul-General in Hong Kong Alexandre Giorgini said he appreciated the efforts in organizing the trip while the delegation visited Foshan and met local government officials there. He said an integral part of the work of consulates-general in Hong Kong is to help enterprises from their countries to identify the opportunities in the Bay Area.

Giorgini said he was surprised to find out that a Foshan heavy equipment manufacturer for railway tunnel, which the delegation visited, was a supplier of equipment for subway construction in Paris. He vowed to gather members of the French business community in Hong Kong to help them strengthen communication with Guangdong and find more win-win cooperation opportunities.

Antony Hung — a board member of the Spanish Chamber of Commerce in Hong Kong who also joined the trip — noted that China’s economic development has entered a new phase, with priority given to high-quality economic growth.

He believes the development of the Bay Area, which is expected to be transformed into a global innovation and technology hub, will fuel growth amid the nation’s new round of reform and opening-up.

Hung, whose parents are from Dongguan, has witnessed Dongguan’s transformation, saying “Made-in-China” products have won international recognition, especially in the high-tech and digital fields.

He believes Dongguan, in close coordination with Hong Kong, Macao and other cities in Guangdong, has plenty to contribute in turning the region into a world first-class bay area.

The Hong Kong General Chamber of Commerce welcomed the latest favorable measures by the central government to spur the Bay Area’s development.

ALSO READ: ‘One country, two systems’ will be integrated into GBA development

It said the measures will facilitate the flow of people and goods within the region, and address some of the major concerns of Hong Kong people who want to explore development opportunities across the boundary.

As one of the oldest business associations in Hong Kong, the chamber has a considerable number of international companies and multinational organizations among its members.