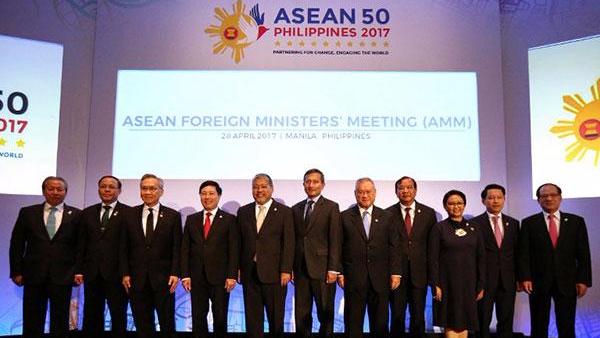 MANILA - Foreign ministers of the Association of Southeast Asian Nations (ASEAN) on Friday urged all parties concerned to exercise self-retraint to de-escalate tensions on the Korean Peninsula.

The ministers reiterated their position in a statement that they support the denuclearization of the Korean Peninsula.

In addition, they called for the resumption of dialogue on the Korean Peninsula to defuse tensions and create conditions conducive to peace and stability.

The ministers also urged the Democratic People's Republic of Korea (DPRK) to comply with the UN Security Council resolutions.

The statement said ASEAN is mindful that instability on the Korean Peninsula "seriously impacts the region and beyond."

ASEAN called on all parties concerned to exercise self-retraint and refrain form taking actions that may aggravate the situation.

The ASEAN foreign ministers met on Friday in the run-up to the 30th ASEAN leaders' summit that will take place on Saturday.

Philippine President Rodrigo Duterte will chair the summit and related meetings of all 10 ASEAN leaders to discuss ways to maintain ASEAN centrality and unity, including having a credible, collective and cohesive ASEAN response while addressing various regional challenges.