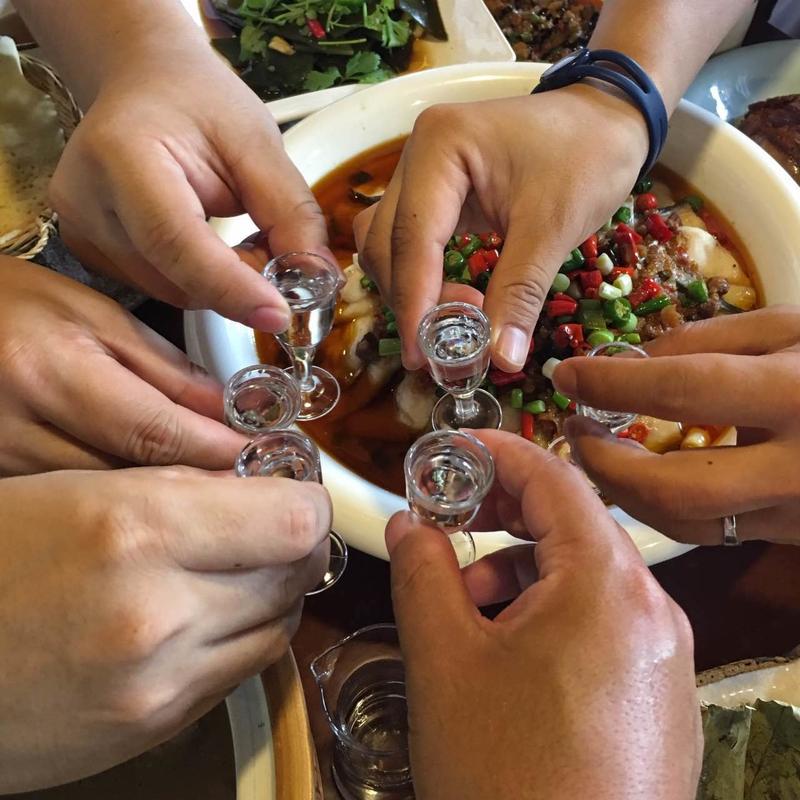 Baijiu, or white spirit, is a must for a Chinese family banquet especially during such big occasions as Spring Festival. (PHOTO PROVIDED TO CHINA DAILY)

My fellow foreigner friends in China typically fall into two categories when it comes to baijiu, or white spirit. The large majority think all baijiu tastes the same - bad - and associate it with high-paced ganbei (bottoms up) sessions followed by highly painful hangovers. The minority know the different styles and appreciate that, as with wine, beer and whiskey, the world of baijiu is diverse.

Given baijiu is the planet's most popular spirit, with more than 10 billion bottles sold per year, and that Chinese New Year is nigh, most of us will be facing this beverage in the coming weeks. Here are a few suggestions for those who loathe the stuff and wonder if there is some way to develop a taste for it.

The best way to underscore baijiu's diversity is comparative tasting. A dozen shots of Red Star are unlikely to prove enlightening. But trying different baijiu varieties side by side reveals contrasts, just as it does with single malts or gins. A good place to start is with the three major categories.

The funkiest category of baijiu is known as sauce aroma. It is best typified by Kweichou Moutai from Guizhou province, which is not only China's most famous booze company but also, as of last year, the world's most valuable. (Kweichou Moutai leapfrogged Diageo, which includes the whisky brand Johnnie Walker in its portfolio.)

A baijiu-like Moutai is made with sorghum, requires an intense process with nine distillations, and undergoes several years of aging. Such baijiu tends to have aromas like soy sauce, sesame oil and fermented paste. (Those might sound odd but some wines have exotic descriptions like graphite or horse saddle, while some single malts are seen as having an iodine or rubber character.) A good introduction to sauce aroma baijiu is Kweichou Moutai Prince, typically priced between 150 yuan (US$24) to 200 yuan for 500 milliliters.

A second category is "strong aroma". These baijiu use one or several grains, such as sorghum, wheat, rice and corn, and are fermented in mud pits, some in them in use for centuries. While aficionados use words like "fruity" and "sweet" for these baijiu, first-timers are often overwhelmed by the sharp character and high alcohol level. They are more likely to describe them as having a solvent or paint thinner aroma.

Strong aroma baijiu such as the well-known Wuliangye are a bit like peaty single malt whiskies from Islay in Scotland: their taste is intense and foreign to many newcomers and, thus, are an acquired taste. Luzhou Laojiao, a producer that claims mud fermentation pits dating back to 1573, has some options that cost from 100 yuan to around 200 yuan for the Tequ brand.

The third category is arguably the most accessible. "Light aroma" baijiu are sorghum-based, fermented in clay pots, and common throughout northern China. The erguotou style is popular in Beijing and Hebei province, and known best through brands like Red Star and Niulanshan, while the neighboring province of Shanxi is home to the fenjiu style. While still highly potent, light aroma baijiu are more neutral than their strong or sauce aroma counterparts and, in turn, tend to be the easiest to use in cocktails.

Red Star and Niulanshan are cheap go-tos while Yidanliang is less well-known but has a pleasant plummy character and is available from 15 yuan. Fenjiu tend to be more refined and are also worth a try, with options from around 50 yuan. While baijiu aficionados will protest that some cheaper products also include neutral spirits, these brands are nevertheless good starting points. Once you have your three or four samples, simply pour a shot of each side by side, and taste away - at your own pace - and see which style you like best. Once you're done, you can start to explore brands within that style.

For those who can't hack baijiu the traditional way - served straight, at room temperature, with a 52 percent alcohol kick - here are a few additional ideas.

Mixers can also make baijiu more palatable. I've found many people enjoy a sweet element, such as caramel liqueur or Kahlua. Try mixing it fifty-fifty with a light-aroma baijiu. You can get a bit more sophisticated by experimenting with cocktails. I've seen baijiu used successfully in the equivalent of a whiskey sour as well as in a Long Island iced tea.

Finally, try infusing baijiu with fruits, herbs and other ingredients. Pomelo skin, hawthorne and plums tend to be fun fits. Some people like to use items associated with traditional medicine, such as goji (wolf) berries, while others spice things up with ginger or chili peppers. Given that entry-level baijiu is relatively inexpensive, this is a low-risk way to personalize baijiu. And once you come up with a palatable infusion, you can then force everyone else to ganbei with it.

The author is a Beijing-based consultant and founder of the annual World Baijiu Day in Beijing.