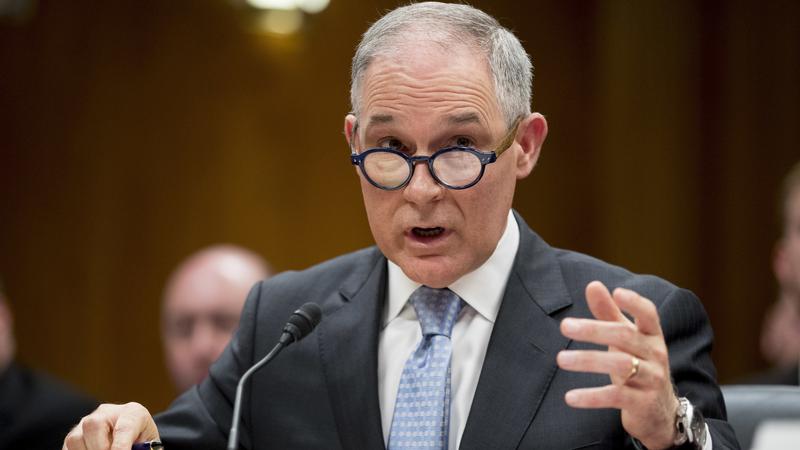 WASHINGTON — US Environmental Protection Agency (EPA) chief Scott Pruitt, who had been lauded by President Donald Trump for his aggressive efforts to roll back environmental regulations, resigned on Thursday under heavy fire for a series of ethics-related controversies.

Democrats and environmental advocacy groups cheered the departure of Pruitt, a close ally of the fossil fuel industry who has often questioned mainstream climate change science

Pruitt was one of Trump's most polarizing Cabinet members, slashing regulations on the energy and manufacturing industries, including a move to repeal President Barack Obama's signature program to cut carbon emissions from power plants, dubbed the Clean Power Plan.

He was also instrumental last year in lobbying Trump to withdraw the United States from the global 2015 Paris climate accord to combat global warming.

But Pruitt lost favor with Trump's inner circle after a string of controversies including first-class travel at taxpayer expense, lavish spending on security, the installation of a US$43,000 soundproof phone booth in his office and accusations that he used his position to receive favors, such as a discounted rental on a high-end condo from an energy lobbyist's wife.

"The unrelenting attacks on me personally, my family, are unprecedented and have taken a sizeable toll on all of us," Pruitt said in his resignation letter.

Trump announced the resignation on Twitter and said EPA Deputy Administrator Andrew Wheeler, a former mining industry lobbyist, will become the regulatory agency's acting chief on Monday. Wheeler is widely expected to continue Pruitt's efforts to roll back and streamline regulation, something that Trump had promised in his presidential campaign.

"Scott has done an outstanding job, and I will always be thankful to him for this," Trump wrote. Trump told reporters later that Pruitt had approached him and offered to resign as opposed to being pushed out.

Wheeler said in a message to EPA employees that he was "both humbled and honored" to lead the agency. "I look forward to working hard alongside all of you to continue our collective goal of protecting public health and the environment on behalf of the American people," he said. 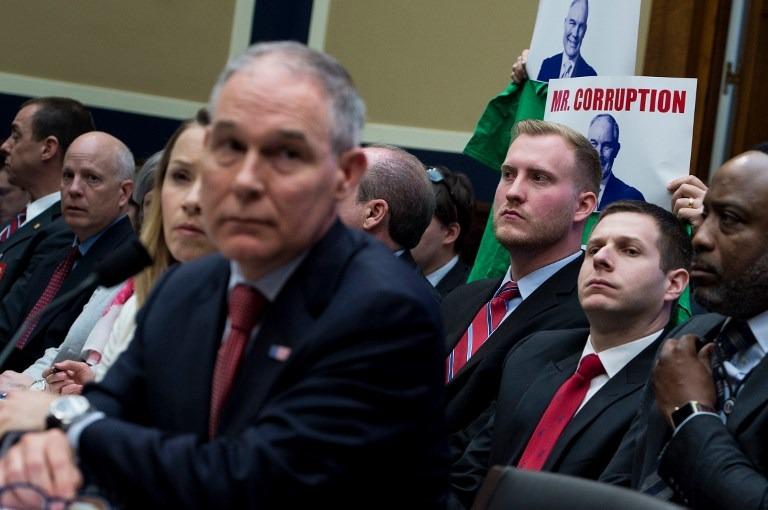 Democrats and environmental advocacy groups cheered the departure of Pruitt, a close ally of the fossil fuel industry who has often questioned mainstream climate change science.

"Scott Pruitt's reign of venality is finally over. He made swamp creatures blush with his shameless excesses. All tolerated because Trump liked his zealotry. Shame," Democratic Representative Gerry Connolly said.

The Environmental Working Group, a public health and environment watchdog, called Pruitt "unquestionably the worst head of the agency in its 48-year history."

Pruitt, as Oklahoma's attorney general before heading up the EPA, had sued the federal agency more than a dozen times on behalf of his oil-drilling state.

Pruitt also rankled some Republican lawmakers, including in Midwest corn-producing states, with his efforts to overhaul a US policy requiring biofuels like corn-based ethanol in gasoline.

Other Republicans, as well as coal and oil industry groups, said in statements on Thursday that Pruitt had been a goodfriend to the industry.

Matt Dempsey, an energy lobbyist at consultancy FTI, said Wheeler will be less controversial than Pruitt but without altering the agenda.

"He will be less political and more straight forward in his approach to the job, which is better for the Trump administration agenda in the long run. The politics will pass but the policy will remain," Dempsey said.

Pruitt was facing around a dozen investigations into his tenure, including his frequent use of first-class flights and his spending on security – which the agency has defended as necessary to defend him against unprecedented threats.

Travel records showed the US government spent US$17,000 in taxpayer money on a December trip to Morocco to promote US exports of liquefied natural gas, which is not part of the EPA's jurisdiction. The Washington Post reported that a longtime Pruitt friend and lobbyist helped arrange the trip and later registered as a foreign agent representing Morocco. 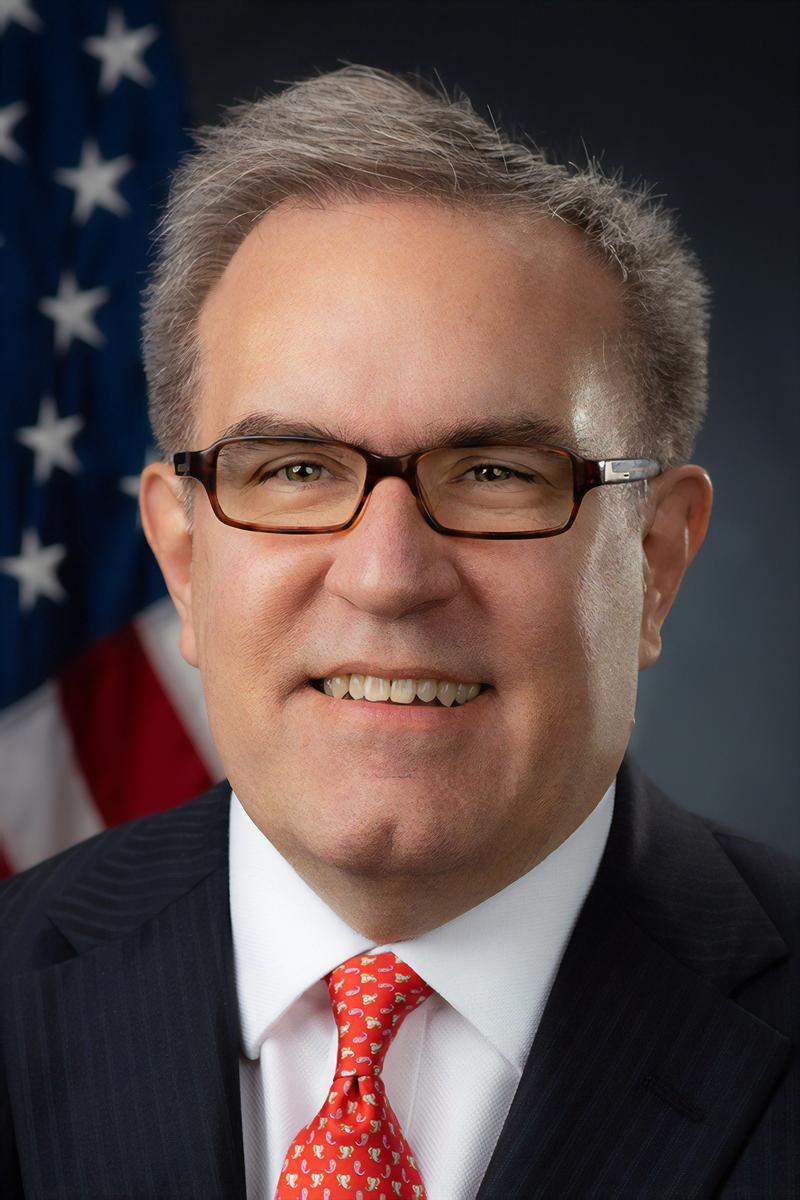 In this April 2018, photo provided by the Environmental Protection Agency, Andrew Wheeler poses for a photo in Washington. Wheeler, the new leader of the EPA, is a former coal industry lobbyist who helped lead an industry fight against regulations that protect Americans' health and address climate change. (PHOTO / EPA / AP)

In one of the investigations, the US Government Accountability Office concluded that the EPA violated two laws by installing the US$43,000 phone booth for Pruitt's office without telling lawmakers first. Pruitt said his staff nevertold him the cost.

Some of the ethics accusations against Pruitt also involved jobs for his wife. Emails obtained by the Sierra Club environmental group showed Pruitt had an aide contact the chief executive of a fast-food chain about his wife becoming a franchise owner.

The Washington Post reported Pruitt had aides also try to get his wife a job at the Republican Attorneys General Association with a salary topping US$200,000.

Pruitt also had an employee carry out his personal errands, including researching the purchase of an old mattress from theTrump International Hotel, according to an interview transcript released by congressional Democrats last month.

A source close to Trump said the controversy over the search for a used Trump International Hotel mattress was the last straw for Trump with Pruitt because it involved the Trump Organization.

During congressional testimony in April, Pruitt was unapologetic for the controversies, often blaming his staff for any agency missteps.