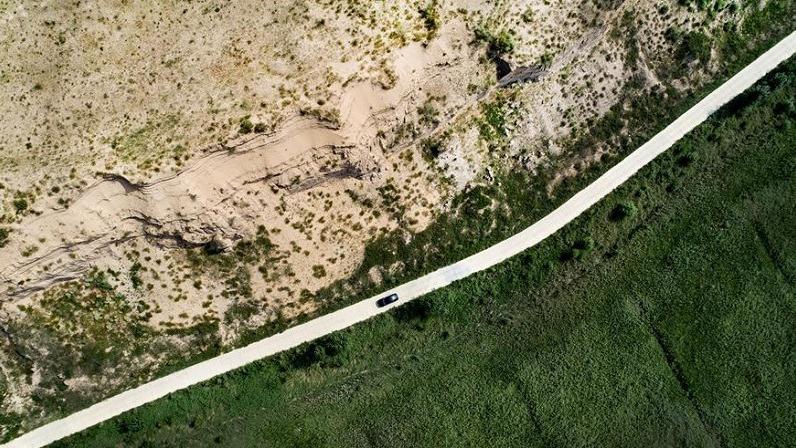 A car runs on a road that divides desert and desert under control in the Hengshan District of Yulin City, northwest China's Shaanxi Province, Aug 4, 2018. (TAO MING / XINHUA)

China will continue to make arduous efforts to honor its promise to have its carbon emissions peak by around 2030 and promote global climate governance in a more fair, reasonable and collaborative way, Premier Li Keqiang said.

Li made the comment as he chaired a meeting on Tuesday of the State Council leading group on coping with climate change, conserving energy and cutting emissions.

As the world's largest developing country, China will fulfill its pledges to meet its emissions target by 2030, he said.

China will coordinate economic and social development with its efforts to cope with climate change, save energy and cut carbon emissions

The country is also willing to work with the international community in adhering to the principles of fairness as well as common but differentiated responsibilities. China will also safeguard the United Nations Framework Convention on Climate Change and the Paris climate agreement and work toward implementation, the premier said.

China will coordinate economic and social development with its efforts to cope with climate change, save energy and cut carbon emissions. It will also further promote the refining and upgrading of its economic structure, he said.

Li also highlighted the importance of continuing to build an ecologically sustainable society and taking decisive steps to prevent and control pollution so that China can continue to make its due contributions to coping with climate change.

He called for greater efforts in energy saving and emissions reductions in key areas such as industry, transport and construction.

The development of energy-saving and environmental protection industries will receive more support, and breakthroughs in key areas such as clean energy and low-carbon technologies will be encouraged, he said.

Li also called for more efforts to strengthen pollution treatment facilities, and he underscored the importance of using pricing, taxation and green finance policies to bring about better results.

The premier also called for efforts to refine laws and regulations in pollution control.

President Xi Jinping and former US president Barack Obama announced in a joint statement during a meeting in Beijing in November 2014 that the two countries would reduce greenhouse gas output. China vowed to put a peak on its carbon dioxide emissions by around 2030, while the US pledged to bring national emissions to at least 26 percent below their 2005 levels by 2025.

The pledges were also part of each country's national commitments related to the 2015 Paris climate agreement.