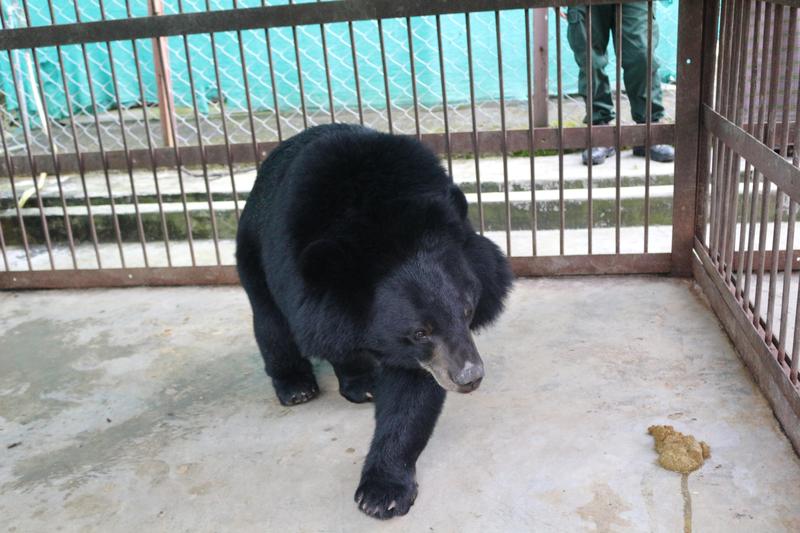 Wildlife rehabilitation centre provides treatment and care to the injured, orphaned, or sick wild animals so that they can be released into the wild after treatment.

However, there are wild animals that find habitat in the human settlement like the Himalayan black bear, Nakar, because of the unusual white mark on his nose.

In 2015, Nakar appeared at Changangkha. Since then, Nakar has been living at the animal rehabilitation centre at Taba.

The three-by-seven metre space provided is just enough for the 115 kg Nakar to move around. However, having to share the space with the injured female Himalayan black bear brought on September 11, he finds the space a little claustrophobic.

The wildlife rescue and animal health section also rescues animals such as sambar deer, barking deer and birds such as owls. The rehabilitation centre is divided into several apartments for the rescued animals.

Five months before Nakar showed at Changangkha, he was found orphaned at a forest fire at Wangduephodrang in 2015. He was brought under human care for about two months before he was released.

Deputy chief forest officer, Kuenzang Gyeltshen, said that the officials recognised him immediately because of the white mark on his nose. “Since he was fed and exposed to human, he found difficulty living in the forest.” Nakar was about five months when he was taken into care.

Next to Nakar, lying on the concrete, is Haazam, another Himalayan black bear brought in 2015 from Haa. Injured while ensnared, she doesn’t have one of her paws, which makes it difficult for her to hunt. Nakar and Haazam will be at the rehabilitation centre for the rest of their lives.

Kuenzang Gyeltshen said that another bear cub about five months old would also be living at the centre forever. “We tried to release him on September 12 and waited for about three hours, but he wasn’t willing to go and approached the officers there.”

Himalayan black bears have about 25 years of life span. Those in captive live up to 30 years.

Kuenzang Gyeltshen said that in other countries, animals kept under captive live longer. “But in Bhutan, the animals will live less than the average lifespan because they lack the facilities they need.”

He said that with lack of natural habitat, larger moving area and hunting practices, the animals will grow obese leading to multiple diseases. “The claws also grow longer which is a concern. Similarly, animals with hoofs will also suffer with over growth if not kept in natural habitat.”

He said that in other countries, animals in need of assistance are kept in the zoo with proper habitat. However, with the lack of a zoo in the country, expansion of the rehabilitation centre is seen as important.

The animal division put proposals for the new rehabilitation centre to World Wildlife Fund and Bhutan Trust Fund for Environmental Conservation but did not receive support.

“We have also put the idea in the 12th plan and if we receive financial support, we have already located a place,” Kuenzang Gyeltshen said.

He said that more animals are rescued every year. The need for larger space is, thus, crucial.