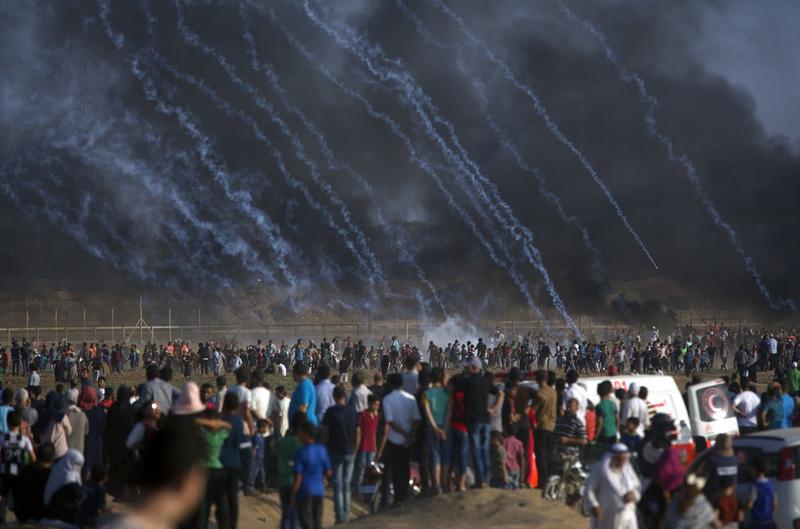 Teargas canisters fired by Israeli troops fall over Palestinians during a protest at the Gaza Strip's border with Israel, July 13, 2018. (KHALIL HAMRA / AP)

AMSTERDAM/GENEVA - Former war crimes prosecutor David Crane, an American who was named only last month to lead a UN investigation into violence in Gaza this year, has resigned, the United Nations said.

The UN said in a statement dated Aug 22 that Crane had informed the Human Rights Council of his decision a day earlier, "due to a personal circumstance that has arisen" and that the Council was "considering next steps".

Crane, a former senior US legal official who served as chief prosecutor of the Special Court for Sierra Leone in 2002-2005, was named chair of the three-person inquiry on July 25.

He could not be immediately reached for comment on Thursday.

At least 170 Palestinians have been killed by the Israeli army in what it has called border protection during weekly protests that began in late March. One Israeli soldier has been killed.

The UN Human Rights Council voted in May to set up the investigation into the killings. Israel said it was being demonized and that the inquiry was intended to undermine its right to self-defense.

Crane, recently retired as a Syracuse University professor, worked for decades for the US government, including as senior inspector general in the Department of Defense. When chief prosecutor of the Special Court for Sierra Leone he indicted the then Liberian leader Charles Taylor for war crimes.

The remaining members of the Commission of Inquiry are Sara Hossain of Bangladesh, and Kaari Betty Murungi of Kenya. The commission is due to provide an update on its work to the Human Rights Council on Sept 24.