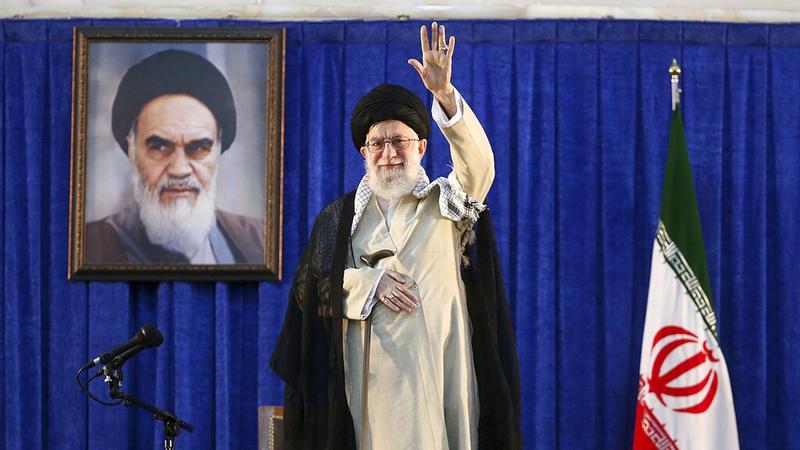 In this picture released by the official website of the office of the Iranian supreme leader, Supreme Leader Ayatollah Ali Khamenei waves to the crowd while attending a ceremony marking 30th death anniversary of the late revolutionary founder Ayatollah Khomeini, shown in the poster at rear, at his mausoleum just outside Tehran, Iran, June 4, 2019. (OFFICE OF THE IRANIAN SUPREME LEADER VIA AP)

Without referring to the US by name, Khamenei said "standing and resisting the enemy's excessive demands and bullying is the only way to stop him."

Ayatollah Khamenei addressed thousands of people on the 30th anniversary of the death of Grand Ayatollah Ruhollah Khomeini, founder of the Islamic Republic, in Khomeini's mausoleum in the capital Tehran.

Without referring to the US by name, Ayatollah Khamenei said "standing and resisting the enemy's excessive demands and bullying is the only way to stop him."

Tensions between Washington and Tehran soared recently over America deployment of an aircraft carrier and B-52 bombers to the Persian Gulf over a still-unexplained threat it perceives from Tehran.

Last year, the US withdrew from a nuclear deal between Iran and world powers and re-imposed sanctions on Iran targeting the country's oil sector.

US Secretary of State Mike Pompeo has said the US is willing to talk with Iran "with no preconditions." Iran says the US must return to the deal first.

READ MORE: Pompeo says US ready to talk to Iran with 'no preconditions'

Ayatollah Khamenei, who has final say on all state matters, said the US is threating Iran with hostility because "they want us to be losers and put our hands up as a sign of surrender, and because we don't do that, they threaten us."

Ayatollah Khamenei added: "Resistance has a cost, but the cost of surrendering to the enemy is higher."

The Ayatollah urged Iranian officials not to pay attention to offers for negotiations made by the US.

"Wherever Americans have set foot, a war broke out, a fratricide began, a sedition was instigated, or an exploitation or colonialism began there," he said.

The Supreme Leader added that Iran is under pressure to negotiate over its missile program because it has been developed to the point where it is a deterrent.

In his speech, Ayatollah Khamenei also criticized Iran's regional rival, Saudi Arabia, for taking a stance against Iran in accordance with the US position.

ALSO READ: US slaps sanctions on Iran after withdrawal from nuke deal

Iran and Saudi Arabia are at odds over many regional issues, including the wars in Syria and Yemen, where they support opposite sides.

Saudi Arabia severed diplomatic relations with Iran after angry protesters in January 2016 attacked its embassy in Tehran and its consulate in the northeastern city of Mashhad over the execution of top opposition cleric Sheikh Nimr al-Nimr.