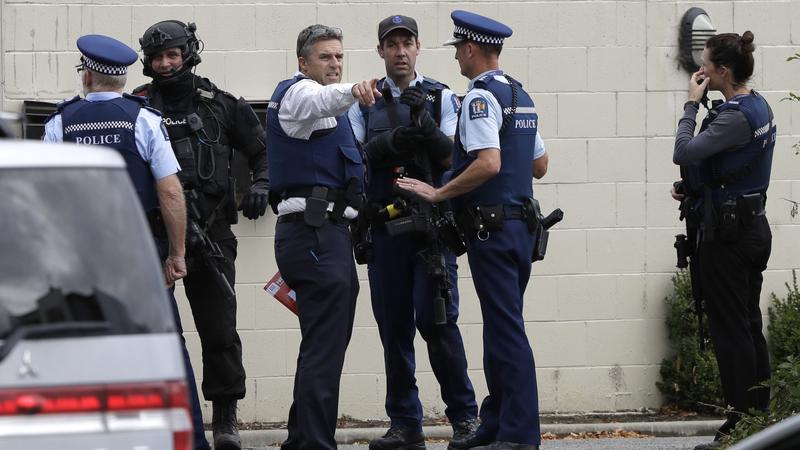 Police stand outside a mosque in central Christchurch, New Zealand, March 15, 2019. Multiple people were killed in mass shootings at two mosques full of people attending Friday prayers, as New Zealand police warned people to stay indoors as they tried to determine if more than one gunman was involved. (MARK BAKER / AP)

WELLINGTON - At least one gunman killed 49 people and wounded more than 48 during Friday shootings at two New Zealand mosques in the country's worst ever mass shooting, which Prime Minister Jacinda Ardern described as terrorism.

Video footage widely circulated on social media, apparently taken by a gunman and posted online live as the attack unfolded, showed him driving to one mosque, entering it and shooting randomly at people inside. 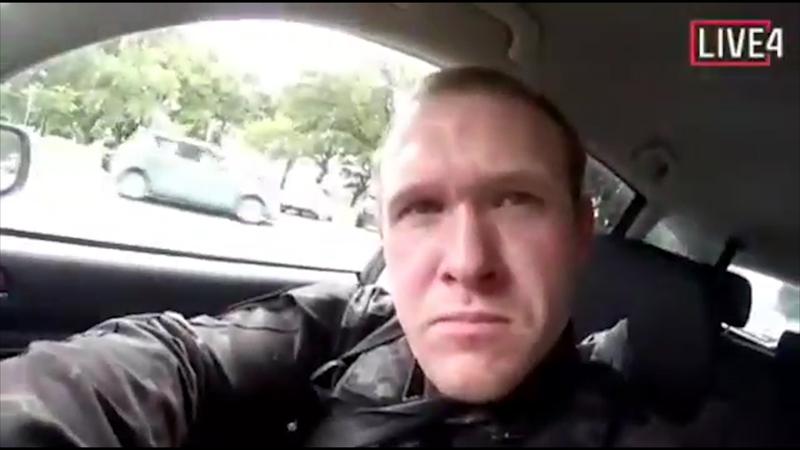 This image taken from the alleged shooter's video, which was filmed March 15, 2019, shows him as he drives and he looks over to three guns on the passenger side of his vehicle in New Zealand. (PHOTO / AP)

The gunman, who claimed responsibility for the shootings, said in a manifesto that he was a 28-year-old white Australian who came to New Zealand only to plan and train for the attack.

Worshippers, possibly dead or wounded, lay huddled on the floor of the mosque, the video showed. Reuters was unable to confirm the authenticity of the footage.

One man who said he was at the Al Noor mosque told media the gunman was white, blond and wearing a helmet and a bulletproof vest. The man burst into the mosque as worshippers were kneeling for prayers.

"He had a big gun ... he came and started shooting everyone in the mosque, everywhere," said the man, Ahmad Al-Mahmoud. He said he and others escaped by breaking through a glass door.

Radio New Zealand quoted a witness inside the mosque saying he heard shots fired and at least four people were lying on the ground and "there was blood everywhere".

Ardern said 30 people were killed at the Al Noor mosque, the city's main mosque, and another 10 at a mosque in the suburb of Linwood. 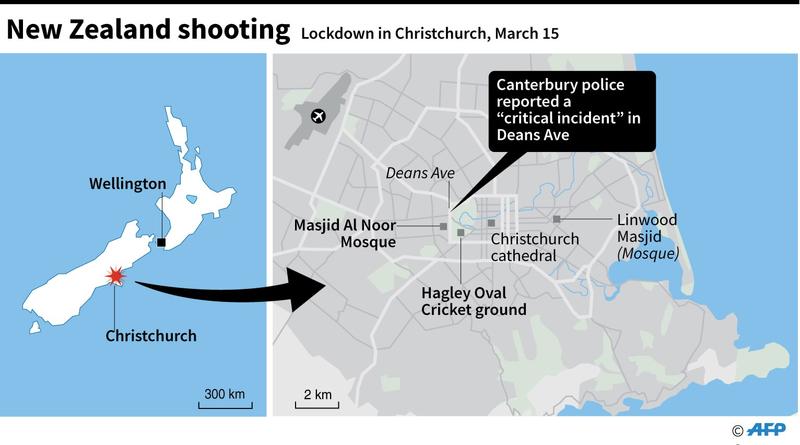 An AFP graphic shows a map of Christchurch's Deans Avenue where Canterbury police reported a "critical incident" on March 15, 2019 during a shooting incident.

"This is one of New Zealand's darkest days," she said.

Bush said four people - three men and a woman - had been taken into custody.

Australian Prime Minister Scott Morrison said one of the men in custody was Australian. He said Australian authorities were assisting with the investigation.

"We grieve, we are shocked, we are appalled, we are outraged, and we stand here and condemn absolutely the attack that occurred today by an extremist, right-wing, violent terrorist," Morrison told reporters on Friday evening.

"This attack reminds us of the evil that his ever present and would seek to strike out at any time."

"I particularly want to express my sincere prayers and thoughts for those New Zealanders, indeed Australians of Islamic faith today, who have been the subject of this callous right-wing extremist attack."

Police said IEDs, improvised explosive devices, were found with a vehicle they stopped.

The online video footage, which appeared to have been captured on a camera strapped to the gunman's head, showed red petrol canisters in the back of his car, along with weapons.

Police said improvised explosive devices were found with a vehicle they stopped.

All mosques in New Zealand had been asked to shut their doors, police said.

The Bangladesh cricket team was arriving for Friday prayers when the shooting occurred but all members were safe, a team coach told Reuters.

Political and Islamic leaders across Asia expressed their disgust at the deadly shooting.

"Indonesia strongly condemns this shooting act, especially at a place of worship while a Friday prayer was ongoing," Foreign Minister Retno Marsudi said in a statement.