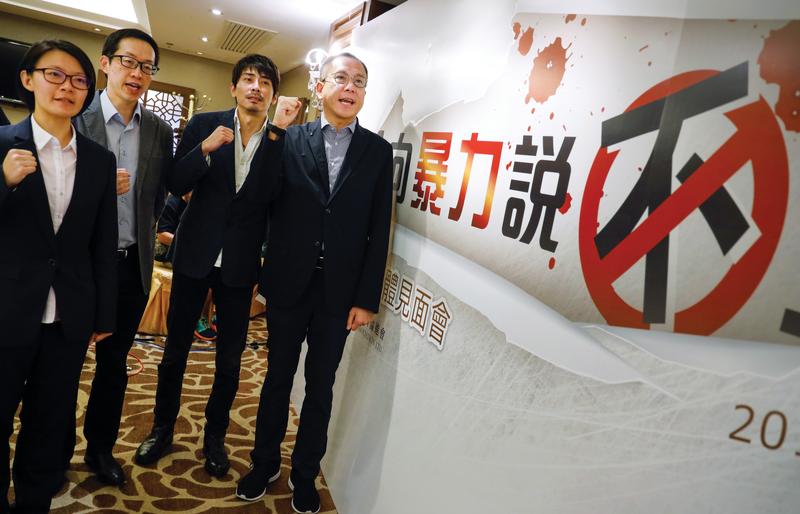 Jaime Sze Wine-him (first right), vice-chairman of the All-China Youth Federation, and members of the association make their stance at the Thursday press conference themed “Say No to Violence”.  (PHOTO / CHINA DAILY)

Peaceful and rational participation is needed to mend Hong Kong’s political system and make it thrive, youth leaders have urged.

The heads local universities have joined their counterparts from other institutions of higher learning in condemning the violence, and called for rational and independent thinking

Albert Chuang Ka-pun, vice-chairman of the Hong Kong Chinese People’s Political Consultative Conference Youth Association, warned on Thursday that confrontation would plunge the city into a vortex, creating a rift that would take a long time to heal.

He urged various parties not to allow themselves to be blinded by politics, and to sit down and work out a way to resolve the political impasse.

Chuang made the appeal at a press conference hosted by various youth groups under the theme “Say No to Violence”, three days after radical protesters stormed the Legislative Council Complex, causing extensive damage to its structure and facilities.

ALSO READ: US told to get hands off HK's bill amendment and youth

He said the youth association he heads will strive to be a connector linking up more young people with the government through various means, including holding regular symposiums.

Lo Kam-wing, former president of the Y.Elites Association, hoped that young people can understand that some controversial social issues are not “all or nothing.”

He said it’s all the more necessary to renounce violence and engage in peaceful expression to ensure that all voices can be heard.

Meanwhile, the heads of two more local universities have joined their counterparts from other institutions of higher learning in condemning the violence, and called for rational and independent thinking.

In a letter to all students of Lingnan University of Hong Kong, President Leonard Cheng Kwok-Hon expressed deep concern over the violent attack on the LegCo building.

He said expressing views in a peaceful, rational and civilized manner is what the community should be committed to. He appealed to students to think independently about social issues and work hard for the well-being of society.

READ MORE: LegCo to halt operation until Oct after damage by protesters

President of the Education University of Hong Kong Stephen Cheung Yan-leung said persistent attacks, violence and confrontation will not help resolve problems. He urged people from all walks of life to talk calmly, rationally and respectfully.