By He Shusi, Luis Liu and Li Bingcun in Hong Kong 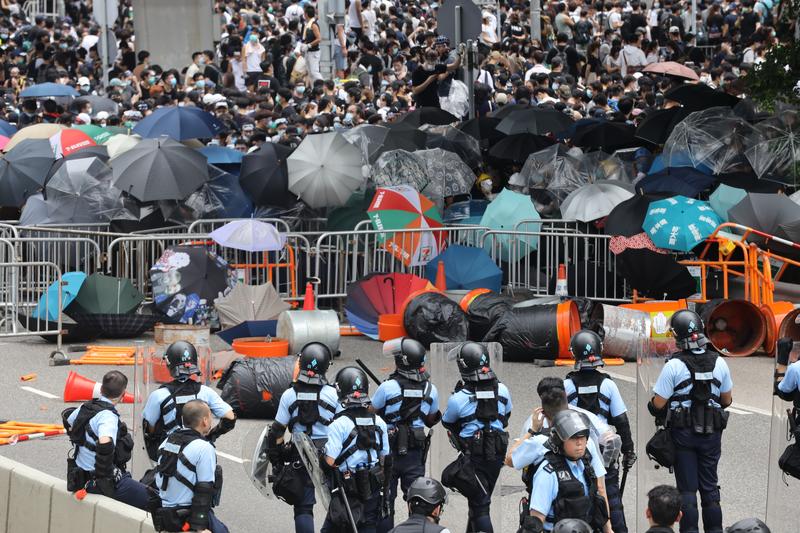 Protesters surrounded Hong Kong's Legislative Council and government headquarters, blocked roads nearby and, according to the police, initiated a riot, in opposition to the city's extradition law amendments on Wednesday, throwing the city into chaos.

Different authorities appealed to the public to stay calm.

She urged the people of Hong Kong to step away from violence. Lam appealed to the public to express their opinions in a rational, peaceful and lawful way.

In an interview on the same day with the city's leading broadcaster－Television Broadcasts Limited－she said she was "saddened" and "worried" by the clashes.

IN PICTURES: Traffic disrupted as thousands gather in HK's Admiralty

Young people may end up doing something they may regret, Lam said.

The chief executive said the government will press ahead with the amendments despite the violent demonstration.

Similar to the illegal "Occupy Central" movement in 2014, tens of thousands of masked protesters, in opposition to the extradition law amendments, occupied the main roads outside the government headquarters and the Legislative Council Complex in Admiralty, Hong Kong Island, despite repeated warnings by police to disperse.

There were serious disruptions to traffic and nearby business activities. 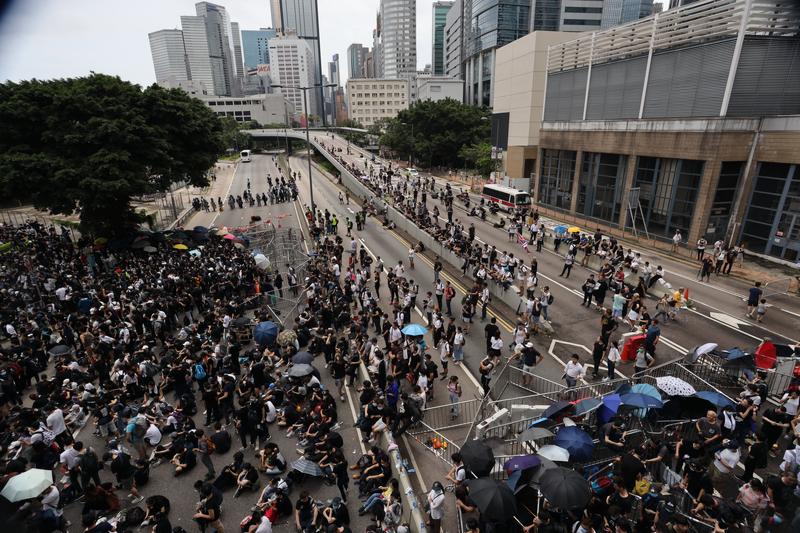 With protesters having blocked lawmakers' access to the LegCo building, the Legislative Council announced it would postpone the second reading of the amendments.

A government spokesman also issued a statement calling on the public to stay away from the area and remain calm.

The government proposed to revise the Fugitive Offenders Ordinance and the Mutual Legal Assistance in Criminal Matters Ordinance in Hong Kong to enable the city to surrender fugitive offenders to jurisdictions that have no long-term agreements with the SAR.

Hong Kong has fugitive surrender agreements with 20 jurisdictions and mutual legal assistance arrangements with 32 others. Such arrangements do not include the Chinese mainland, Macao and Taiwan.

Some police officers were injured during the clashes, while more than 20 protesters were taken to hospitals

In Beijing, the spokesman for the Ministry of Foreign Affairs, Geng Shuang, reiterated the central government's firm support for the SAR government's proposal to amend the extradition law. Hong Kong's mainstream public opinion opposes any acts that will jeopardize the city's prosperity and stability, Geng said.

The protest started in the early hours of Wednesday. Masked protesters, equipped with umbrellas and goggles, built metal barricades to confront police officers. Some protesters were seen prying bricks from the sidewalk.

They also grabbed and rearranged metal barricades set in front of the building. Tear gas, rubber bullets and pepper spray were used against protesters who stormed the line of police outside the building. 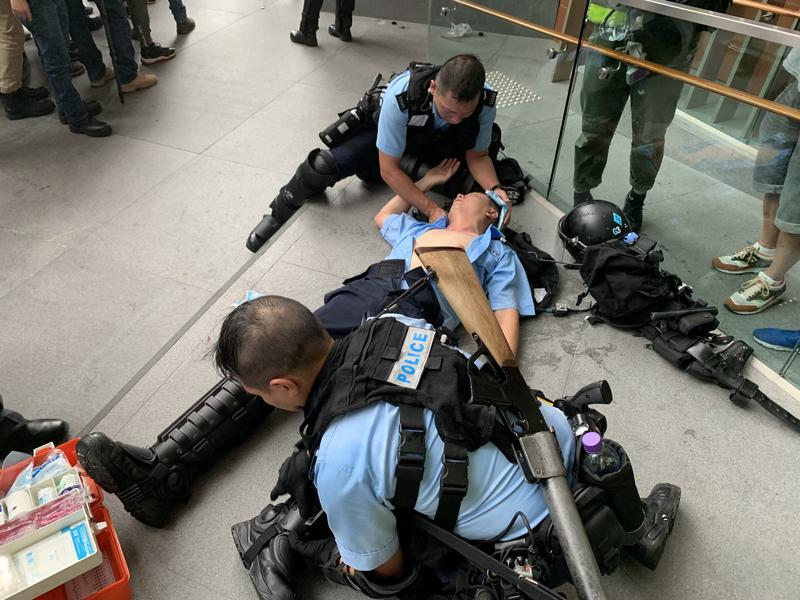 A police officer lies injured during a riot as other officers attend to him outside the Central Government Offices in Hong Kong, June 12, 2019. (ORANGE NEWS / FOR CHINA DAILY)

Several public events were canceled. Some banks and stores in Admiralty and Wan Chai closed temporarily due to the demonstrations.

Lo urged them to stop clashing with police and occupying major roads of the city. He also called on the public to leave the area in an orderly manner for their safety.

The Colloquium of Six Religious Leaders of Hong Kong issued a statement on Wednesday, echoing the call for people to express their concerns through dialogue in a rational and peaceful way.

Hong Kong stocks tumbled on Wednesday as sentiments dimmed over a number of factors. The Hang Seng Index, the city's benchmark, dropped 1.73 percent, or 480.8 points, to close at 27,308.4 points on Wednesday.

The stock market's bullish momentum until Tuesday drove the equity gauge as high as 27,857 points.

Kwok Sze-chi, executive director of Bright Smart Securities, said that Goldin dropped the bid partly over worries about a potential lack of funding if they pursued the deal.

Dai Kaiyi contributed to this story.