The range of exposure is important for young artists, says Angela Li of Contemporary by Angela Li, which is exhibiting works by five young Hong Kong artists for the first time at Art Central. “It’s really good (for the artists),” she says. “The fairs bring in Hong Kong international and regional collectors so it’s a great opportunity to meet them all in one go.”

“Each of them speaks to us in a particular way,” she says of her Hong Kong artists, whose diversity is noteworthy. For example, Livy Leung’s oil on canvas works portray her daily life and musings on events. Reni Haymond uses different types of ballpoint pens to create dense, cell-like patterns that seem to move in waves.

Interdisciplinary artist Cheuk Wing-nam, who works with sound and computer technology, says participation brings new challenges as well as a new experience. Her site-specific audio installation AK7 SHOU3, on show at Art Central, features a violin, cello, recording equipment, sensors and speakers. The sensors pick up vibrations from human movement nearby, setting off sounds, including Cantonese and Mandarin tones, when the installation is touched.

“I’m very happy to be one of the artists here. Because my work involves sounds, and in art fairs it’s not very common to have sound art,” says Cheuk. “For me it’s like a challenge — how to put the sound in a silence.” 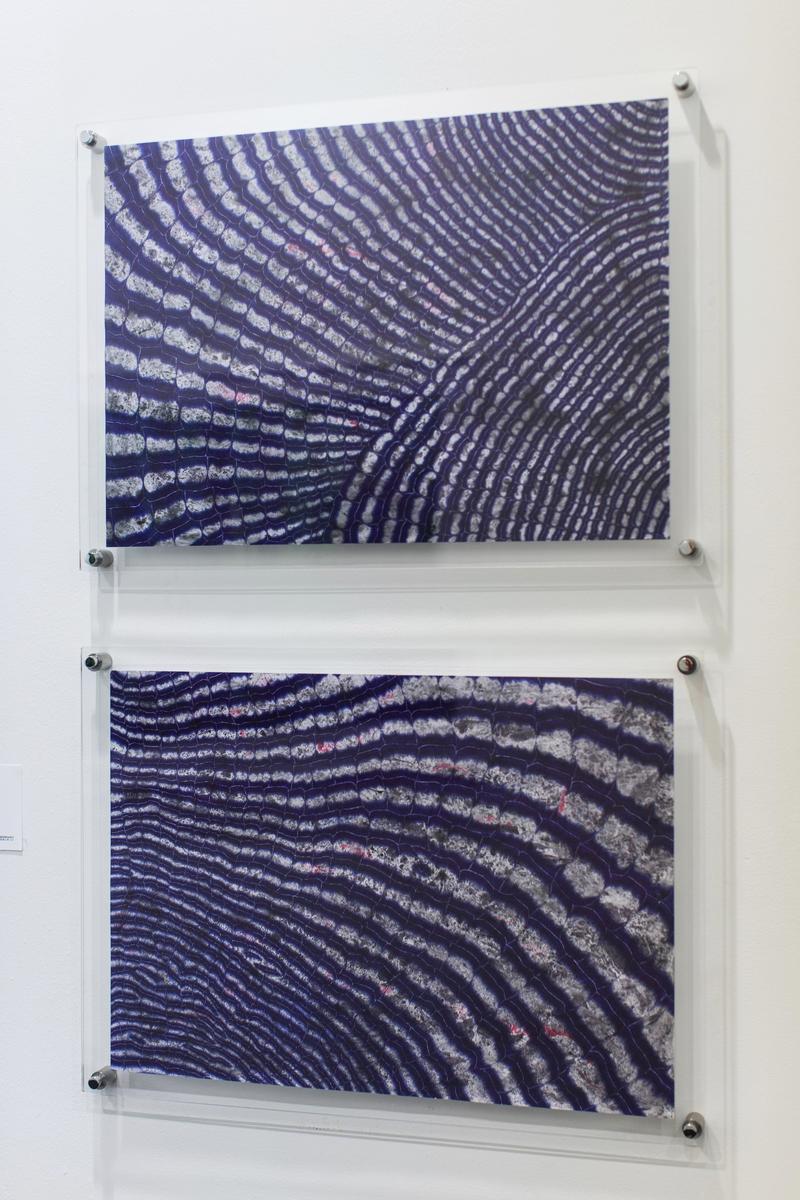 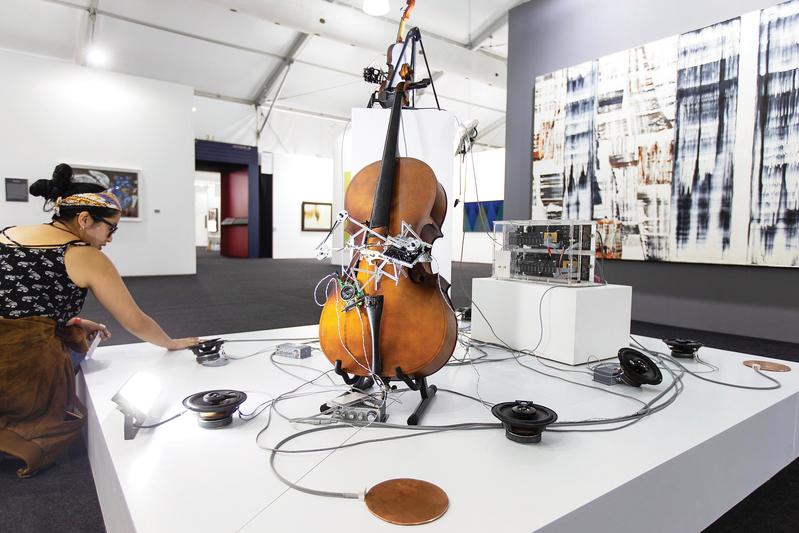 It’s her first time to show at Art Central and she hopes the fair will bring her opportunities to create another large-scale installation elsewhere. “In previous years, I was here in the visitor’s position, this time I do my work here,” she says. “I think that’s so cool. I want to keep it going.”

Angela Yuen is showing a colorful, carousel-like piece entitled City Rhapsody — Project Roseate, which celebrates Hong Kong’s history. The piece, with several small plastic toys attached to it, turns round in slow motion. A light source at the center casts colored shadows of the plastic animals, trees and geometry box tools, creating an impression of the Hong Kong skyline, projected onto the three surrounding walls — double-sided screens that allow for shadow play and encourage audience participation.

The piece is a tribute to Hong Kong’s past as a major manufacturing center for children’s toys in the 1950s and 60s, explains Yuen. “I think plastic toys are a good symbol of that era, and of that spirit as well,” she explains. “I think it is the hardship and the toughness that they had in the old days that nurtured the success of Hong Kong.”

For tech-ink artist Victor Wong, who is also a visual effects supervisor for movies, the fair is an opportunity to introduce a new concept. His booth features a giant suspended paintbrush hanging over an LCD-tiled floor. Visitors are invited to give the giant brush a push to set it in motion and then use a small control panel to create a painting from a range of pre-set options, such as color and background. The new work is replicated and a magnified version projected on the floor and the result is printed. Every new tech art creator also gets to take a selfie with Wong and the paintbrush.

Ink has garnered less attention from younger generations, says the artist. “I want to use technology to arouse interest, so I try to combine some tech work and the ink world together,” he adds. “I want to promote (the idea) that ink painting is not that hard to do.” 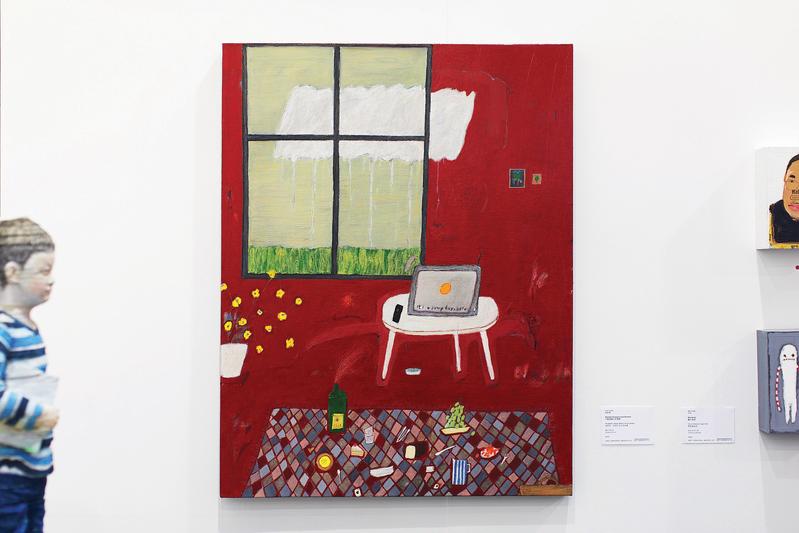 At ACAS, Hong Kong-based architecture and nature photographer Ziver Olmez is inspired by Hong Kong’s landscapes, and plays with exposure and tones to create what he calls “inversions” that bear some similarity to film negatives. The 40-year Hong Kong resident Martin Lever is showing a series of strongly-colored impressionist paintings that pick out scenes of everyday life in Hong Kong. Both artists are among the 250 selected by ACAS.

“For these exhibitors, the show is an important fixture in their calendar. They enjoy the experience, and find success in selling their works and in building a collector base,” says fair director Mark Saunderson.

Grotto Fine Arts focuses only on Hong Kong artists. At ABHK, it is showing a six-panel ink on paper work entitled Way Down Deep by the Hong Kong artist and water sports enthusiast Chan Kwan-lok — an underwater rendition of a diving journey he took in Egypt. Chan graduated from the Chinese University of Hong Kong (CUHK) in 2015 and it’s his third time to exhibit at ABHK.

“At Art Basel, we can meet a lot of overseas collectors so it’s very good exposure for the artists, especially local Hong Kong artists,” says gallery manager Wong Tsz-ching. “It’s not easy to make such a huge work and display it in the gallery spaces,” she adds.

Also showing here is Hung Fai, a CUHK 2013 graduate who uses traditional Chinese ink drawing techniques in his own way. In two ink on paper works, Vessel I and Vessel II, Hung has created a 3D version of his mother’s reminiscences of making paper boats as a child.

Having exhibited at ABHK several times, Hung says the fair is important for exposure and also encouraging experimentation. “It’s quite different from exhibitions in a gallery space,” he says. “Artists will show their most important work at Art Basel.”